As unemployment rates rise, youths from different parts of Jordan have begun marching to the Royal Court in Amman for sit-ins demanding job opportunities. 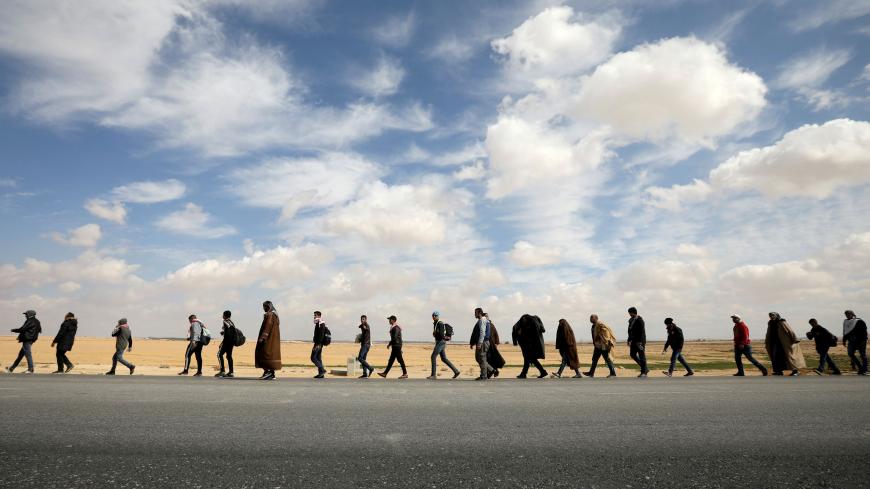 People walk-on a highway during a protest march from the city of Aqaba to Amman to demand more employment opportunities, near Amman, Feb. 20, 2019. - REUTERS/Muhammad Hamed

What began as a sit-in at the gates of a royal palace in the southern city of Aqaba by a small number of unemployed youths on Feb. 14 has evolved into a protest movement. More than 40 young Jordanians decided to walk from Aqaba to Amman, some 218 miles away, to stage a sit-in at the Royal Court to demand jobs. As they marched, they were soon joined by others along the way.

By Feb. 20, the demonstrators numbered more than 150. While they camped outside the Royal Court in Amman, unemployed youths elsewhere announced that they too would be marching to the capital. Thus began the new movement underlining the plight of thousands of young Jordanians, many with college and university degrees, who cannot find a job.

It took the government of Prime Minister Omar al-Razzaz three days before deciding to talk to representatives from the Aqaba march. On Feb. 17, a delegation from the Ministry of Labor had met with the demonstrators 93 miles south of Amman and had tried to convince them to turn back. The marchers were unconvinced.

With public opinion on the side of the protesters, the Royal Court said it was ready to receive their demands and convey them to the government. For a while it seemed that a crisis had been averted, but no sooner had the Aqaba march disbanded than a group of unemployed youths in Maan announced on Feb. 22 that they would begin marching to the Royal Court.

With the public focused on the marchers, Razzaz remarked on Feb. 22 that the government cannot provide jobs for everyone. That same day, Labor Minister Samir Murad announced that the government would be coordinating with the Royal Court on new jobs, adding that the ministry hoped to create 30,000 positions during 2019. He added that the jobs would be in the tourism, services, health, telecommunications and agriculture sectors as well as others.

Additionally disturbing figures revealed the unemployment rate among college and university graduates to be 24.5%. Unemployment among females with a university degree was a staggering 78.2%. The highest unemployment rates according to age groups were 47.3% for people aged 15-19 and 38.1% for those aged 20-24.

With tens of unemployed youth from Maan continuing their sit-in, pressure on the government mounted. On Feb. 28, the Cabinet issued a statement asserting that while the government understood the just demands of those staging the sit-in at the Royal Court under severe weather conditions of cold and rain, finding solutions would require time. It called on the protesters to return home and allow the government to coordinate with the private sector. Continuing the sit-in, the statement said, would send the wrong message to those wishing Jordan harm, and the government would not allow that to happen.

The protesters refused to leave. On March 3, an initiative to mediate by tribal leaders from Maan failed to end the sit-in. Fearing a backlash, the government bowed to pressure and sent a ministerial delegation to meet with the protesters and to listen to their demands.

The crisis comes at a time when the Jordanian economy is experiencing a slowdown following a number of unpopular government decisions aimed at raising revenue. With a recession affecting almost every sector of the economy, Jordanians have seen an increase in bankruptcies and closures of factories and small and medium-size retailers in past weeks. It is difficult to believe that the government can rely on an ailing private sector to create jobs.

The political commentator Oraib al-Rantawi believes more marches to the Royal Court are in the cards as the economic crisis deepens. Writing in the daily Addustour on Feb. 23, he said the government finds itself dealing with an impossible situation. It is under pressure from the International Monetary Fund to streamline its expenses and is now also under pressure from thousands of unemployed Jordanians to find them jobs.

Also writing in Addustour on Feb. 24, the political commentator Fares al-Habashneh said the marches are an indication of just how deep the political crisis facing the government has become. These protesters, he said, have resurrected the pressing issues of social justice, good governance and social and economic development.

So far the marches have been peaceful, but as they continue to spread, they will put pressure on both the Royal Court and the government to come up with solutions. While the Cabinet was correct in asserting that immediate solutions cannot be found, local observers fear that the frustration among the unemployed could turn into anger, providing fresh ammunition to anti-government protests that had subsided in the past few weeks.