Does Israel see Rouhani's visit to Iraq as strengthening his hand in Iran? One answer could be that while Rouhani was in Baghdad, hard-liner Ebrahim Raisi was elected deputy chief of the Assembly of Experts. 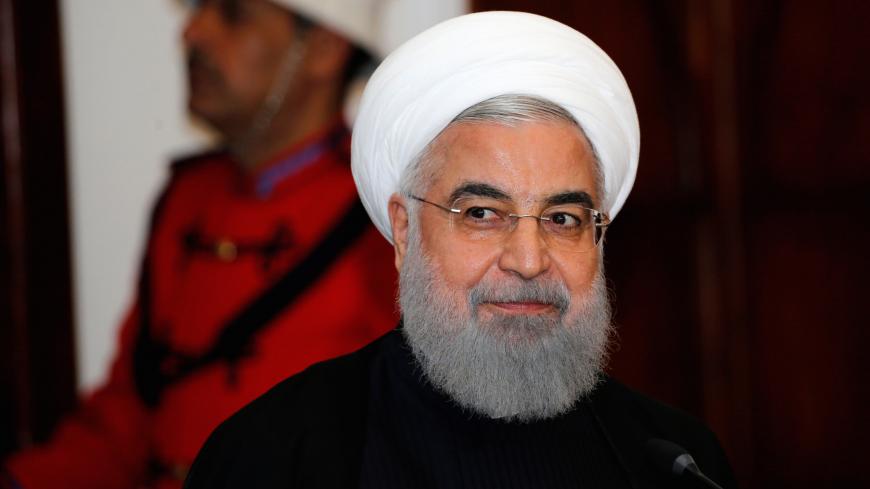 This week, Israel, Lebanon and Kuwait will be hosting US Secretary of State Mike Pompeo on what will be yet another drive by the Donald Trump administration to push back against Iran’s “maligned” regional interests. This visit comes on the heels of Iranian President Hassan Rouhani’s visit to Iraq last week, one of whose goals is to do what the United States opposes: expand relations with regional countries, namely Iraq.

For Israel, one of the main questions from Rouhani’s visit to Iraq in general, and his unprecedented audience in Najaf with top Shiite cleric Grand Ayatollah Ali al-Sistani in particular, will be whether it will strengthen the hands of Iranian moderates in Iranian domestic politics.

The likely answer in this case is: hardly. While there are, as noted in an Al-Monitor article titled “Rouhani leverages Sistani visit to maneuver on Iran's regional policy,” approximately 49,000 students based at 300 seminaries in Iran who received stipends from Sistani in 2013, today such numbers do not provide much leverage in Iranian domestic politics. Religious organizations in Iran since former President Mahmoud Ahmadinejad’s election in 2005 have started to lose their political influence. Before then, presidents used to visit important marjas in Qom to gain support for important political decisions. What about now? Well, how many times has Rouhani visited Qom since coming to office? Seemingly only one.

As respectable as Sistani is and as unprecedented his audience with a sitting Iranian president was, and as notable as Rouhani’s economic deals in Iraq were, none of these regime organizations are likely to increase support for Rouhani as a result of this trip to the point where he can change major decisions. For example: Will the recent visit by Rouhani tip the balance in favor of the moderate wing of Iranian politics who want Iran to join the international Financial Action Task Force watchdog? Very unlikely. Will the recent visit have an impact on Iranian regime intelligence organizations, such as IRGC intelligence, that have been arresting (kidnapping) dual Iranian-European citizens, something which is against the interest of Rouhani government as it deters investment? Again, this is unlikely.

The recent visit is also unlikely to increase the leverage of the Rouhani administration in foreign policy decision-making by much, including when it comes to Iraq. The IRGC Quds Force has its own top of the line access in Baghdad through Ambassador Iraj Masjedi, who is a former adviser to Quds Force commander Qasem Soleimani. He is likely to have as good if not better everyday access to various Shiite militias and top Iraqi politicians, past and present. Meanwhile it is unclear whether Foreign Minister Mohammad Javad Zarif’s recent resignation provided the Foreign Ministry in particular, or the Rouhani administration in general, with more leverage. This is despite the statement of support from Soleimani after his resignation. Soon after Soleimani expressed his support, Zarif was publicly ridiculed, albeit indirectly, when deputy Quds force commander Ismail Ghaani said Syrian President Bashar al-Assad’s top-secret trip to Iran was arranged by the Quds Force. Ghaani added, “Those who needed to know” knew about it, and those who didn’t need to know, didn’t hear about it. Although he also said, “It was, after all, a sensitive operation. … [Rouhani] was informed” and that the failure to inform Zarif “goes back to them” (coordination within the Cabinet), this could easily be interpreted as informing the Iranian public that Zarif does not have security clearance and could not be trusted with such top-secret information.

The next important question for Israel will be: Will the visit lead to any changes in Iran’s Syria strategy? This is an important question to ask, as Iran’s proxy militia forces in Syria are reported to include Shiite militia fighters from Iraq. The answer here again is likely to be negative. Although Sistani’s fatwa was crucial in bringing many thousands of Iraqis to fight IS, the numbers required for the IRGC’s Quds Force to run operations in Syria are smaller. Therefore, Soleimani does not need Sistani’s backing in the same manner. This can be viewed from the fact that despite the negative view of some Shiite clergy in Iraq to the war in Syria, there are still Shiite Iraqis going to fight in that war.

What is likely to be more important for Israel is not what was happening in Iraq on March 12 when Rouhani was there, but what happened in Iran on the same day in the Assembly of Experts. The members of this 88-member body, whose tasks include choosing the next supreme leader, held a vote to choose its next deputy chief. One of the top contenders was former judiciary chief and current head of the Expediency Council, Ayatollah Sadegh Larijani. The other top contender was Ebrahim Raisi, the current head of the judiciary and former head of the important, multibillion-dollar Mashhad-based bonyad, Astan-e Quds Razavi. Both are believed to be contenders for the role of the supreme leader’s successor and both will need the majority of votes at the Assembly of Experts for this position. Raisi defeated Larijani in a 42-27 vote to become the deputy chief of this important assembly. Raisi’s larger vote in this instance in the same assembly that will vote to choose the next supreme leader could theoretically be interpreted as a sign that he has a stronger chance of becoming supreme leader than other contenders, including Larijani. To Israel, this development and its consequences are of more importance than Rouhani’s recent visit to Iraq. The same could apply to Rouhani as well, as Raisi could end up being his next boss as supreme leader. The two, who were rivals in the 2017 presidential election that Raisi lost, have not had the best of relations.