The choice of incoming Foreign Minister Hossein Amir-Abdollahian suggests that new Iranian President Ebrahim Raisi is downgrading the role of the Foreign Ministry in regional conflicts. 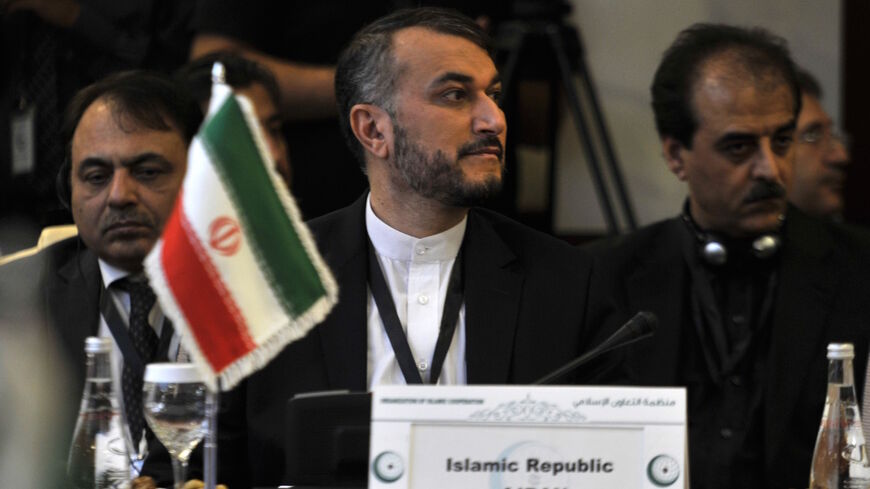 Iranian Deputy Foreign Minister Hossein Amir-Abdollahian (C) attends an extraordinary meeting of the Organization of Islamic Cooperation to discuss the situation in Yemen on June 16, 2015, in Jeddah, Saudi Arabia. - AFP via Getty Images

Hossein Amir-Abdollahian, the nominee for foreign minister and the only deputy minister from President Hassan Rouhani’s administration to remain to be considered for Raisi’s Cabinet, has been nominated to replace his former boss, outgoing Foreign Minister Mohammad Javad Zarif.

Amir-Abdollahian, a career diplomat who is known to be close to the Islamic Revolutionary Guard Corps (IRGC),  is expected to chart a less Western-focused approach than his former boss.

It is now expected that diplomats close to the IRGC's Quds Force will hold influential posts in Iran’s diplomatic missions in the Middle East region. When Quds Force commander Qasem Soleimani was still alive, all the Iranian ambassadors to the Arab countries in the Middle East could be removed and appointed according to his wishes.

And when Zarif met with Soleimani in August 2013 after winning a vote of confidence from parliament to be the top Iranian diplomat, Soleimani asked Zarif to keep Amir-Abdollahian in his post, according to a high ranking Iranian diplomat who spoke on condition of anonymity.

However, the cooperation between Zarif and Amir-Abdollahian did not last long and on June 19, 2016, he was removed by the foreign minister.

The next month Amir-Abdollahian be became parliament Speaker Ali Larijani's adviser for international affairs, which kept the diplomat in the political and policy loops.

According to a leaked audio file in which Zarif was recorded as part of an internal oral history project speaking on the duality of diplomacy and the military field, Hossein Amir-Abdollahian is definitely one of the diplomats in the military field camp.

The 57-year-old diplomat's experience has been focused almost exclusively on the Middle East.

His previous posts include political expert at Department of Persian Gulf Countries; deputy ambassador of the Iranian Embassy in Baghdad between 1997 and 2001; Iran's ambassador to Bahrain from 2007 to 2010; and deputy foreign minister of Arab and African Affairs.

Amir-Abdollahian remained in his post as adviser to the speaker after Larijani was succeeded by Mohammad Bagher Qalibaf, indicating the longtime diplomat's influence and strong ties with various ruling elites in the Islamic Republic, a feature that has played an important role in his ascendance to become the pick to top the Foreign Ministry.

In the meantime, while he has maintained these close ties with influential politicians, he also kept good relations with the military.

Amir-Abdollahian’s admiration for Soleimani has gone viral as a result of leaks of some of his comments on social media in recent weeks. "Some of Lt. Gen. Soleimani's friends were quoted to have said that during some operations against Zionist forces in the region, there were nights that the general came to their dreams and showed the road map for the operation," he said on Dec. 31, 2020, days before the first anniversary of Soleimani's assassination.

The arrival of Amir-Abdollahian to the top of the Foreign Ministry shows that Raisi's foreign policy likely will focus on improving relations with the East and rapprochement with countries in the region, with perhaps less priority on the nuclear file.

"The president and the supreme leader put a lot of emphasis on the removal of sanctions," said Mohammad Mokhber, the first Iranian vice president, on Aug. 14, about the prospect for nuclear talks. Mokhber added, "Our planning for running the country cannot rely on the lifting of sanctions, and we must plan in such a way that it is presupposed that the domination system will not remove the sanctions."

The remarks by Mokhber indicate that the Raisi administration’s likely approach to foreign policy will track more closely than ever with Supreme Leader Ayatollah Ali Khamenei.

Meanwhile, in the aftermath of controversy following Zarif's leaked audio file, the Iranian supreme leader sharply criticized the foreign minister and stressed that all over the world, in any country, the Foreign Ministry only implements policies set by top authorities.

Accordingly, one could also expect that with Amir-Abdollahian heading the Foreign Ministry, he would return the nuclear file exclusively to the Supreme National Security Council.

Given Amir-Abdollahian's special relationship with the Quds Force, his main task will likely be to advance that organization's regional plans in the Middle East. As a result, the role of the Foreign Ministry could be lowered to a level where it is only in charge of coordinating and meeting the demands and will of the military officials, especially the IRGC, in the Middle East.

As a result, it should probably be expected that the new foreign minister will not play a role similar to that of Zarif in the past eight years.

Raisi’s comments to date signal that the new foreign minister will have less presence in international forums and less control over the country's sensitive issues.