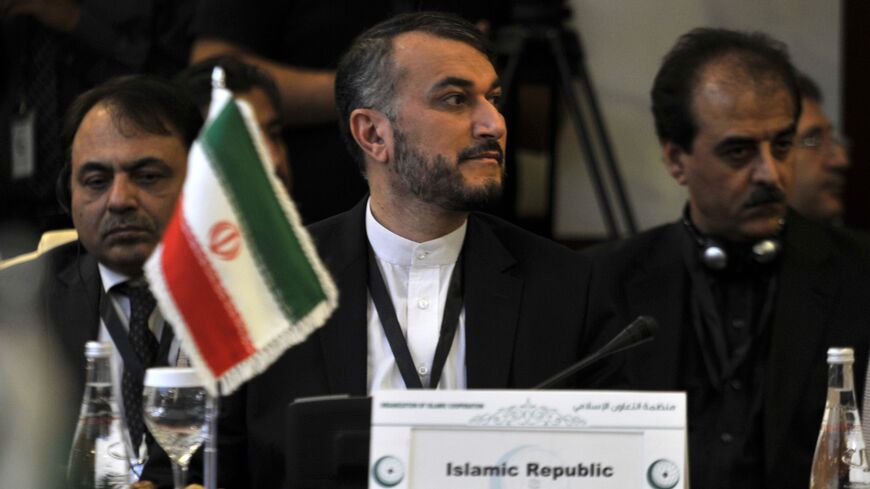 Iranian Deputy Foreign Minister Hossein Amir-Abdollahian attends a meeting of the Organisation of Islamic Cooperation to discuss the situation in Yemen on June 16, 2015, in the Saudi Red Sea city of Jeddah. - AFP via Getty Images

Iranian President Ebrahim Raisi has tapped conservative diplomat Hossein Amir-Abdollahian as his foreign minister, state media outlets reported on Wednesday. Following his expected approval by parliament, Amir-Abdollahian will replace Mohammad Javad Zarif, the US-educated architect of the nuclear deal who served in the role since 2013.

Reuters reports that Amir-Abdollahian, 56, is a staunch anti-Westerner with ties to Iran’s powerful Revolutionary Guard Corps.

He previously served as Iran’s deputy foreign minister for Arab and African affairs between 2011 and 2016. His other postings include ambassador to Bahrain and deputy chief of mission at Iran’s embassy in Baghdad. Amir-Abdollahian holds a PhD in international relations from Tehran University.

An Iranian nuclear negotiator described ​​Amir-Abdollahian to Reuters as a “hard-line diplomat.”

“If the Foreign Ministry remains in charge of Iran’s nuclear dossier, then obviously Tehran will adopt a very tough line in the talks,” said the negotiator, who requested not to be named.

Amir-Abdollahian’s appointment comes amid stalled efforts to revive the 2015 nuclear accord, which offered Iran sanctions relief in exchange for limits on its nuclear program. The Iranian government has repeatedly violated the terms of the deal since President Donald Trump unilaterally withdrew from it in 2018 and reimposed tough economic sanctions.

No date has been set for a seventh round of talks between Iran and world powers in Vienna, and the election of hard-liner Ebrahim Raisi has thrown prospects for a revived deal into further doubt.

Amir-Abdollahian, who is currently an international affairs adviser to the Iranian parliament speaker, served on Reformist President Mohammad Khatami’s nuclear negotiating team. In 2007, Amir-Abdollahian participated in rare US-Iran talks over the war in Iraq.

He referenced the Baghdad talks in a 2018 tweet in which he claimed that “negotiations with the US has never been a taboo subject.”

“Negotiation in itself is not the issue here,” said Amir-Abdollahian, adding, “Rather, it is the US’ bullying behavior.”

Raisi’s other cabinet picks include former Deputy Oil Minister Javad Owji as oil minister and Gen. Mohammad Reza Ashtiani, an ex-deputy chief of staff of the armed forces, as defense minister. Gen. Ahmad Vahidi, who is sought by Interpol over the 1994 bombing of a Jewish cultural center in Argentina, was tapped as interior minister. None of Raisi’s ministerial appointees are women.