Erdogan draws huge crowds, but needs more than base to win

Critics say Turkish President Recep Tayyip Erdogan is using survival and terrorism rhetoric to whip up support and distract from the economy, hoping that voters will be drawn by appeals to their political identity. 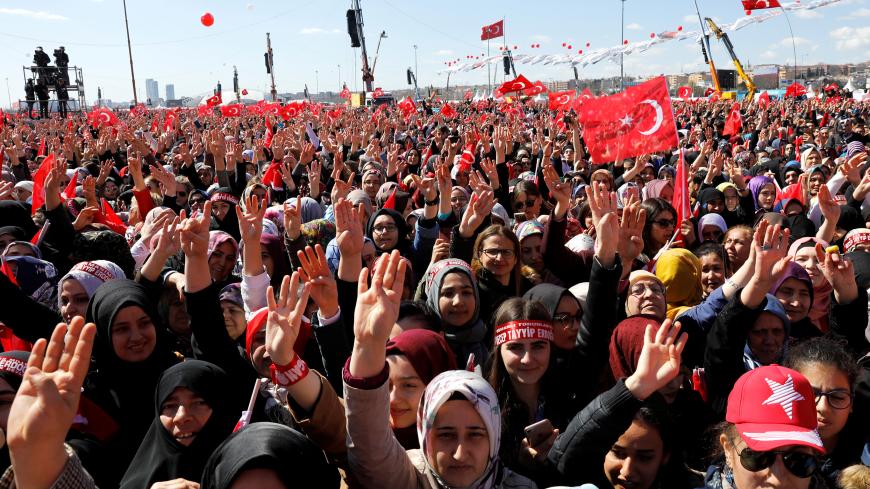 ANKARA, Turkey — The huge crowd had been standing in the sun for more than an hour by the time the president took the stage on Saturday. The mayoral candidate from the ruling Justice and Development Party (AKP) had lectured them on his plans to no applause. They had heard the president’s principal ally, Devlet Bahceli, condemn the opposition in the tone of a snarling dog and responded with a few whistles and cheers.

But when Recep Tayyip Erdogan took the microphone, wearing a black suit and a yellow Ankara football scarf, the crowd roared and waved their red-and-white Turkish flags. The noise was milder than the applause he got at his election rally here last June, but he roused the crowd of supporters who came to see him.

Looking healthy and suntanned — he has been speaking to two or three rallies a day for the past three weeks — Erdogan began his greetings. “I salute all the people who stand for the survival of our country,” he said, using the Turkish word “beka,” which means something between survival and permanence and is the slogan of the alliance between his AKP and Bahceli’s National Movement Party.

“We will not give an opportunity to those who want to divide our country and put our flag on the ground,” he said. “We will take off the masks of those who cooperate with terrorists.”

Pollsters would say Erdogan’s rhetoric is wide of the mark. The No. 1 issue in the municipal elections on March 31 is not national survival, secession or terrorism, but the economy. Inflation is 20%, unemployment is 13.5% and people queue at government stalls to buy vegetables at subsidized prices. Earlier this month the economy was found to be in recession as it had suffered negative growth for the last two quarters of 2018.

The president was on target when he asked: “Ankara, will you vote for increased production and employment?” Back came the answer: “Yes.” To Al-Monitor’s correspondent, who stood farther back in the crowd, the “yes” was a little soft and unconvincing.

Polling in Turkey is unreliable, and even the better firms have been keeping their surveys close to the chest recently, apparently afraid of incurring presidential wrath. But one independent and low-profile company published its results on Saturday. When AREA asked people if Turkey was facing a threat to its survival, 47% of Turks said no, 37% said yes and 16% declined to respond. The poll was conducted by face-to-face interviews with 5,150 people March 9-19 and has a margin of error of 2%.

Pundits say Erdogan is using survival and terrorism rhetoric to whip up support despite the economy, hoping that voters will be drawn by appeals to their political identity. But it is doubtful such themes will outweigh the discontent over vegetable prices rising by 30%. The day before Erdogan spoke, the Turkish lira fell 4% against the dollar. He did not mention it at the rally.

Members of the crowd told Al-Monitor the state of the economy would not break their loyalty to Erdogan.

“I admit some prices are high,” said Asir Koca, a computer programmer. “The AKP has increased the welfare of our country, so fluctuations in prices are not a big problem. We’ll deal with it.”

Yadigar Tirpanci has not had a job for 30 months, but she was not blaming the government, saying unemployment has always been a problem. “We won’t sell our country for potatoes and onions,” she added. “The people responsible for those prices are those who manipulate the exchange rates.”

This is Erdogan’s view. In his speech, Erdogan attacked “those who threaten us with terrorism and economic measures.” But it is not the view of most Turks. The AREA poll found 66% of Turks say the government’s economic policies have failed, 22% said they have been successful and 12% declined to respond.

Erdogan had been speaking only 10 minutes when people began leaving. Hundreds of people turned their backs on the president and walked past Al-Monitor’s correspondent.

“We were in front of the stage and we got tired,” said one lady, declining further questions.

“They got bored. They don’t want to wait,” observed another, civil servant Serpil Cetinkaya, who added that she would stay.

Erdogan is still a powerful orator, but his message is waning. With their feet, the leavers were saying “we’ve heard it all before.”

Despite the massive attendance, crowd size is no indication of how people will vote on Sunday. In the June presidential election, the opposition’s main candidate, Muharrem Ince, drew 1.5 million people to his Ankara rally while Erdogan drew only around 20,000. But on election day, Erdogan polled 51.5% to Ince’s 36.2% in Ankara.

The president carried on. He accused the main opposition Republican People’s Party of “cooperating with terrorism.” He asked the crowd to watch a video on the screens of the co-leader of the People’s Democratic Party (HDP), Sezai Temelli, saying that if the opposition alliance won Istanbul and Ankara, the new mayors will know “they were elected by Kurdish votes.”

It was a reference to the pro-Kurdish HDP not fielding candidates in the main cities to avoid splitting the opposition vote. The opposition alliance had not asked the HDP to join it for fear of being associated with a party that many voters regard as aligned with the militants of the Kurdistan Workers Party.

Erdogan told the crowd that Temelli’s remarks were “an insult to voters.” “Is there a Kurdistan in Turkey?” he asked. The crowd replied “No.”

To win, Erdogan needs to appeal to the political center, the voters beyond the 33% of the electorate that forms his base. And the Kurds, who constitute roughly 20% of the population, are a significant group. In Istanbul, for instance, where pollsters say the election is too close to call, the Kurds number an estimated 2 million of the city’s 15 million inhabitants.

Erdogan accuses the HDP of supporting terrorism and secession. The party denies both charges. He appears to have calculated that by lacerating the HDP, he will win more nationalist votes than he will lose Kurdish ones. The tactic worked in the November 2015 and June 2018 elections, but it may not in today’s climate.

“Economic conditions have made people wake up,” an opposition supporter named Gonul (she declined to give her surname) told Al-Monitor in the city's Swan Park. “I believe some of [the AKP’s] grassroots will vote for the opposition this time.”

Finally, Erdogan got on to his strongest platform: What his party has accomplished in the 17 years it has ruled Ankara. The screens broadcast pictures of new housing estates, the high-speed train station, the metro extension, new universities, technology parks and so forth.

As the video wrapped up, it showed a city engulfed in smog. “This is your Ankara, Mr. Kemal,” Erdogan said, referring to the leader of the opposition, Kemal Kilicdaroglu.

But members of the crowd had continued to leave. The rally took place in the Hippodrome, a featureless military parade ground covered in concrete. By now there was lots of empty space in front of Al-Monitor.

Erdogan said he planned to turn the Hippodrome into a public park. “Do you accept?” he asked the crowd. A man walking toward Al-Monitor lifted his furled flag in acknowledgement and said “yes” with a smile.