President Recep Tayyip Erdogan, long a close observer of opinion polls, now indicates they are not to be trusted when it comes to March 31 local elections that may put his leadership to the test. 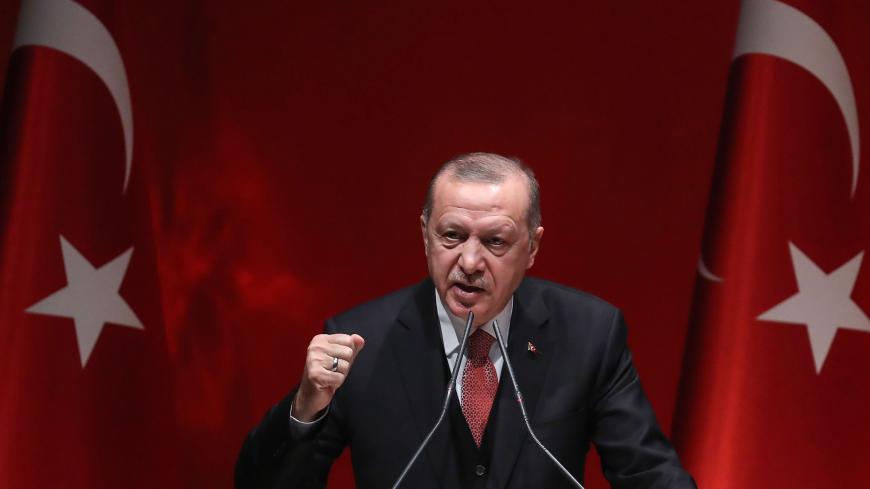 Turkish President Recep Tayyip Erdogan addresses a meeting of provincial election officials at the headquarters of his ruling Justice and Development Party in Ankara on Jan. 29, 2019. - ADEM ALTAN/AFP/Getty Images

ANKARA, Turkey — Turks are intrigued by what will happen March 31 when they elect new town councils. Rarely have municipal elections been so important. President Recep Tayyip Erdogan has addressed a rally in a different city every day this week, and we are still four and a half weeks from polling day.

The reason is simple: the polls are a referendum on Erdogan and this time, with the economy in the doldrums, the opposition is believed to have a better-than-ever chance of humiliating the president.

Local elections in Turkey are traditionally an opportunity to protest. Voters know they are not deciding the fate of the country, so they vote more boldly than in other polls.

Erdogan knows very well that while his name will not be on the ballots March 31, he is in fact the candidate. He dominates his Justice and Development Party (AKP), having shunted aside his internal critics, and the past five years of elections have shown he is clearly more popular than his party. Accordingly, the posters on lampposts and billboards give far more prominence to Erdogan’s face than that of the candidate for mayor.

What Turks want to know is whether the opposition will win the two biggest cities in the land March 31: They are Istanbul and Ankara, both held by the AKP at present.

The more reliable polling companies are being unusually discrete about the results they are receiving. Two such firms declined to respond to Al-Monitor’s request for data today.

The head of a third company, Hasan Bahri Yildiz of Denge polling, told Birgun newspaper that “deep currents” in Turkey today were making it “more precarious [to forecast] compared with previous years.”

Ibrahim Uslu of the polling firm ANAR said the preponderance of alliances in these elections — both the AKP and the main opposition party are in alliance with smaller parties — means that voters often find themselves obliged to vote for the ally of their normal party. Having to vote for a candidate of another party was “causing confusion in voters’ minds,” Uslu told Birgun.

Neither Uslu nor Yildiz would say what their surveys were finding.

An indication of what the polls were saying came from Erdogan himself. On Sunday, he told a television channel: “I don’t have confidence in surveys any more. Only one of them comes close [to the actual result], the others are far off.”

Nobody who follows Erdogan believed this. He has been a close observer of polls from the earliest days of his political career. Pollsters say he has engaged one of the best polling companies in the country, and it reports to him exclusively.

On Tuesday night, NTV pressed Erdogan about his newfound distrust of polls.

“In surveys, there are serious manipulations,” Erdogan replied. “When I was a candidate for mayor of Beyoglu (a district in Istanbul) in 1989, I established a survey team. At that time surveys were not a commonly used tool. Then we became a party that successfully used surveys as a tool, but recently we see the results from different companies do not match each other. The biggest survey for me is the March 31 election. I trust my people. I trust my God.”

Political analyst Akif Beki said the president was trying to “calm down his own party officials in the face of negative survey results.”

Birgun was more direct. “It is not coincidence that at a time when the economy is getting worse and worse that there are statements suggesting the surveys are not reliable,” the opposition paper said.

The paper devoted its front-page lead story to Erdogan’s dismissal of opinion polls.

“For the first time, the AKP is taking a stand against opinion polls,” the sub-headline said.

The story, written by Birgun’s political staff, said there was “unprecedented fluctuation of voter behavior against the AKP” owing to the economic crisis.

The facts of the crisis are well known. Inflation is at 20%. Unemployment is above 12%. And the prices of vegetables have risen so high that the government has persuaded municipalities to open stalls in the street where people can buy potatoes and onions in the confidence they are not being overcharged.

Alongside the lead story, Birgun published an article headlined: “Queuing is our life.”

It reported that when Diyarbakir city council announced it would hire 387 people, thousands of people lined up to apply. They waited for hours.

A reporter for Cumhuriyet managed to snatch a quote from the charismatic candidate for the opposition alliance in Istanbul. As Ekrem Imamoglu was crossing the Bosporus in a ferry from Besiktas to Uskudar, the reporter asked him about Erdogan’s saying the polls were untrustworthy.

“I know the results which made the president unhappy,” replied Imamoglu, a member of the main opposition Republican People’s Party (CHP). “We trust the results that we are receiving, and we are happy with them.”

“Look at my face and you will see the survey results,” Imamoglu added with a broad smile.

However, it would be unwise to write off Erdogan’s chances on March 31. He has surprised polling companies on many occasions. Political scientists say his core support, those who vote for him whatever happens, has risen to about a third of the electorate.

March 31 will put that support to the test.