Turkey's fundamentalist Saadet Party will run its mayoral candidate in the June 23 repeat election in Istanbul, possibly tipping the results in favor of the opposition party. 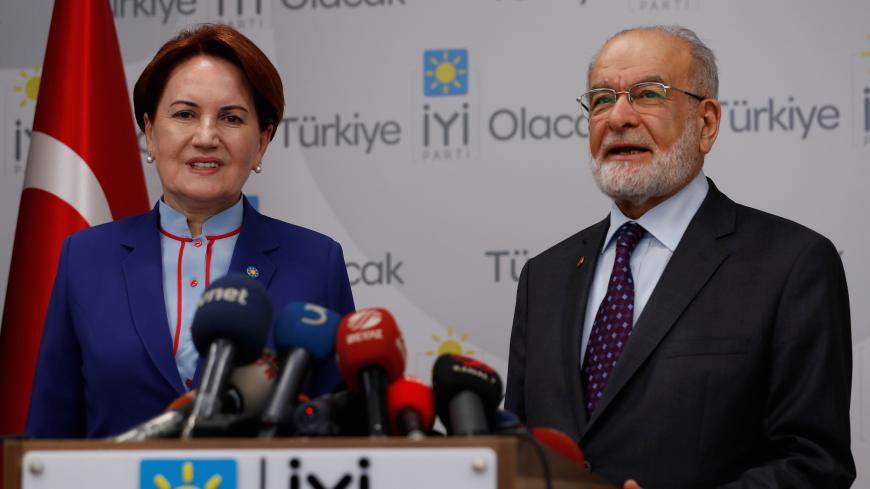 ANKARA, Turkey — A small story tucked away in Turkish newspapers this week could become significant in five weeks’ time: The Saadet Party, which finished third in the Istanbul municipal elections, announced it would run in the repeat election June 23.

The Islamist fundamentalist party got only 1.2% of the city’s vote March 31, but its 103,000 voters are ideologically closer to the Justice and Development Party (AKP) of President Recep Tayyip Erdogan than to the secular opposition Republican People’s Party (CHP).

Pundits had predicted that if Saadet did not run again, most of its supporters would vote for the AKP candidate, former Prime Minister Binali Yildirim, rather than the CHP’s Ekrem Imamoglu on June 23. As Imamoglu defeated Yildirim by a mere 13,000 votes in the first election, Saadet supporters could well give victory to the government in the second election.

However, Saadet has often accused Erdogan of destroying Turkey’s civil liberties. It criticized the Supreme Election Council’s decision to cancel the March 31 elections and hold a rerun. And in announcing its decision to stand again, it made clear it was thinking of the national interest.

“After wide-ranging discussion in our committees,” Saadet said in a statement, “and considering the direction in which public opinion is going, and the country’s realities, we have decided to sustain our candidate Necdet Gokcinar for the election of mayor of Istanbul.”

Gokcinar has no chance of winning, but by competing he will draw off voters who would otherwise cast their ballots in favour of the government.

Saadet revealed that Gokcinar had already paid a price for standing against the government. Gokcinar’s son had worked for the Istanbul Stock Exchange before he took leave to join the armed forces. When he returned from duty this month, he found he had been dismissed “on instructions from Ankara,” the party said in a statement. “It’s obvious this decision was political.”

The AKP candidate for mayor, Yildirim, likes to portray himself as devoted to public service. After the election council declared Imamoglu the winner of the first election (subject to appeal), the press asked Yildirim what he would do now that he had lost.

“I have so far served my country by taking on various responsibilities,” Yildirim replied, referring to his being transport minister, prime minister and speaker of parliament. “I will continue to serve. I have never been after position or office. My only aim while doing all these jobs, doing all these services, has been to increase people’s quality of life, to ease their lives and to see them happy.”

This week we learned that Yildirim has not always been so high-minded. Birgun newspaper resurrected a newspaper report from 1999, which revealed that while managing the Istanbul Fast Ferries Company (IDO), Yildirim awarded the contracts for the cafeterias in three ports and on 24 ferries to firms owned by his family. What is more, he gave IDO jobs to four members of his extended family.

The mayor of Istanbul at that time, Ali Mufit Gurtuna, fired Yildirim for nepotism.

Hurriyet newspaper published the original report in November 1999. Birgun quoted it on May 14 and was quickly followed by the online journal T24 and Cumhuriyet newspaper.

Al-Monitor asked an editor at Birgun why the paper had resurrected a story that was nearly 20 years old.

“There is no special reason,” Ibrahim Varli replied. “It was published because Binali Yildirim is running for mayor of Istanbul. The story first appeared on social media, and then we picked it up.”

Yildirim has not responded to this week’s reports. Journalists have long wondered about the scale of wealth of a man who has spent his life in government and municipal service. In 2016, Cumhuriyet reported that Yildirim owned 28 ships, but he has never confirmed this. However, when the press asked him about his family’s buying a ferry for $445,000, he famously replied, “$445,000 is not a lot of money.”

In a separate development, Turks watching the ATV channel during iftar on Saturday saw an Islamic cleric perform a conversion ceremony on a 13-year-old Armenian boy named Arthur. The cleric, Nihat Hatipoglu, told viewers he had the family’s permission to bring Arthur, a refugee from Syria, into the Islamic faith.

Days later, an Armenian legislator in Turkey’s parliament, Garo Paylan, told the press that Arthur’s family had given no such permission.

“The child’s mother was very upset," Paylan said. "As a family they were very sad because they had witnessed the abuse of their child.” He added it was a crime to convert a child without the family’s permission.

Paylan said he would complain to the state broadcasting authority about both the program and the cleric. “I am also filing a complaint with state prosecutors,” he told the online journal Bianet.

Paylan, who belongs to the Peoples' Democratic Party (HDP), received unusual support from the opposite end of the spectrum.

“I think this was unseemly and I regret it,” Mustafa Yeneroglu, an AKP legislator, wrote on Twitter. The lawmaker for Istanbul said it was “an abuse” to convert a child without the parents’ permission. “I would have the same feeling if a 13-year-old Muslim boy were to be baptized by Christians without the consent of his family.”

Yeneroglu accused Hatipoglu of a “lack of empathy.” The cleric has not responded to Yeneroglu or Paylan.

A fourth event that drew attention this week was an attack on a pro-opposition journalist in Antalya. Idris Ozyol was leaving the paper's offices the evening of May 15 when three men with sticks attacked him, leaving him with injuries to his face, arm and chest. The attackers fled, and colleagues took Ozyol to the hospital.

It was the second attack on a journalist in five days. On May 10, seven men ambushed Yavuz Selim Demirag outside his home in Ankara and beat him unconscious with baseball bats. Demirag writes for the conservative Yeni Cag newspaper, but he is critical of the government.

The Contemporary Journalists Association condemned the assault on Ozyol, saying the assailants had a “stone-age mentality.”

The association said a local leader of the Nationalist Movement Party (MHP), which is allied with the AKP, had threatened Ozyol. It named the leader and said: “We call on the prosecutors to do their duty.”

Beating up opposition journalists has become a trend, meaning the state is not cracking down hard enough on the perpetrators.