Turkey will have its first major political debate since 2002 as the ruling party takes extraordinary measures ahead of the second vote for Istanbul mayor. 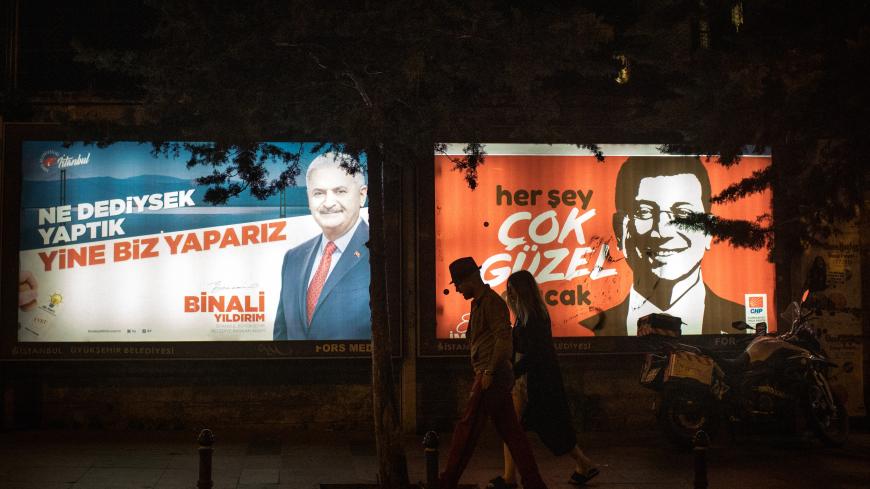 In healthy democracies, a candidate’s willingness to participate in a televised debate ahead of elections is not newsworthy. In Turkey, where the last major political debate took place in 2002, such a decision can be seen as a watershed moment.

On June 16, Binali Yildirim, the Istanbul mayoral candidate from the ruling Justice and Development Party (AKP), agreed to take part in a debate with his rival, Ekrem Imamoglu of the Republican People’s Party (CHP), ahead of the do-over elections scheduled for June 23. In March, Imamoglu surprised many when he narrowly won the Istanbul mayoral seat — long held by President Recep Tayyip Erdogan’s AKP and its ideological forerunners — but his victory was revoked after Turkey’s electoral board ruled some ballot box committees had violated electoral laws and a redo was set in motion.

With less than two weeks before voting day, Yildirim continues to trail behind in opinion polls and is now set to face off against the charismatic Imamoglu on live television in a much anticipated political event that some observers see as a rare sign of weakness from the AKP. For nearly two decades, the party has governed Turkey and most of its largest cities, setting its own terms on public discourse as opposition leaders and media outlets have been increasingly silenced. Yet after losing most major metropolitan areas in the March 31 municipal elections, the AKP has been forced to alter its campaign strategy at the risk of losing Istanbul a second time.

“Given that Binali Yildirim already has state support, government support and name recognition, I think he is doing this because he’s trailing behind Imamoglu,” Berk Esen, an assistant professor of international relations at Bilkent University in Ankara, told Al-Monitor. “[The AKP knows] they are running out of time and options to close the gap.”

Though televised political debates were held in Turkey through the 1980s and 1990s, the last significant debate took place in 2002 between Erdogan and the CHP’s Deniz Baykal. Since then, AKP candidates have largely abstained from such direct confrontations and party officials increasingly favored appearing on pro-government news networks where they would answer pre-screened questions. Yildirim’s decision to square off with Imamoglu presents a stark contrast to his party’s pre-election norms, even from as recently as March’s municipal elections, before which Erdogan fielded soft questions while AKP candidates sat silently in the background.

According to Sinan Ulgen, the executive chairman of the Istanbul-based EDAM think tank and a visiting scholar at Carnegie Europe, such a debate might be an opportunity for Yildirim, provided he performs well, to get ahead in opinion polls.

“It’s a risky move, because it may very well happen that the electorate would favor Imamoglu as an outcome of this debate, but there is always a possibility that the opposite may be true, and Binali Yildirim may come out as the winner,” Ulgen told Al-Monitor.

The idea was initially introduced by Turkish journalist Didem Arslan Yilmaz, who volunteered to serve as moderator. After much discussion, both candidates agreed to participate, but chose Fox News anchor Ismail Kucukkaya to moderate. Despite the network’s conservative reputation in the United States, Fox plays a more neutral role in Turkey, and it and Kucukkaya are sometimes labeled as pro-opposition. For example, during his program on June 11, Kucukkaya hosted Garo Paylan, an Armenian member of parliament with the pro-Kurdish People's Democratic Party, whose members rarely appear on Turkish television.

“[Kucukkaya] is known to be a pro-opposition person" and the AKP accepted him as moderator "to basically give Binali Yildirim the advantage of being the underdog in this debate, that’s how I read it,” Ulgen told Al-Monitor.

The underdog role is often exploited in Turkish politics and both candidates in the second Istanbul election will try to claim it. According to Sirin Payzin, a senior correspondent for independent Turkish news site T24 and a former CNN Turk presenter, the AKP has long worn the image of victimhood while consolidating power and restricting freedom of expression.

“Binali Yildirim will play the ‘we are victims’ card,” Payzin told Al-Monitor in an email. “He will focus on ‘what dangers await the conservatives if the CHP wins.’ Whenever Ekrem Imamoglu tries to bring up the corruption cases, the discourse of ‘They are trying to take revenge, they are jealous of us serving you’ will be put in action.”

Payzin said the debate will not change the AKP’s image in the eyes of voters.

“One debate is nothing more than an attempt to repair an image and appear cute to the world and their constituencies when 95% of media is under the ... presidency’s control, when journalists get detained or face new cases against them because of their articles and speeches, when a mono-voice dominates the country and the opposition is not allowed to talk, when asking questions is regarded as being a traitor, when journalists are not allowed to investigate,” Payzin wrote.

In the lead-up to June 23, much of the discussion will continue to focus on the AKP’s legacy after 17 years of uninterrupted power and the opposition’s ability to challenge Erdogan’s dominance in Turkish politics. For at least a decade, international and domestic observers have been highlighting the Erdogan’s drift toward authoritarianism, but following the results of the municipal elections, some have maintained that Turkey’s democratic system may be flawed, but remains competitive.

“This is not Putin’s Russia,” Esen told Al-Monitor. “We’re not really that hegemonic authoritarian. The trend has been in that direction, and the outcome of the Istanbul election will say a lot about where Turkey is headed.”