Egypt’s grand imam of Al-Azhar, Sheikh Ahmed al-Tayeb, provoked controversy in Egypt by saying that polygamy can do “injustice to women and children.” 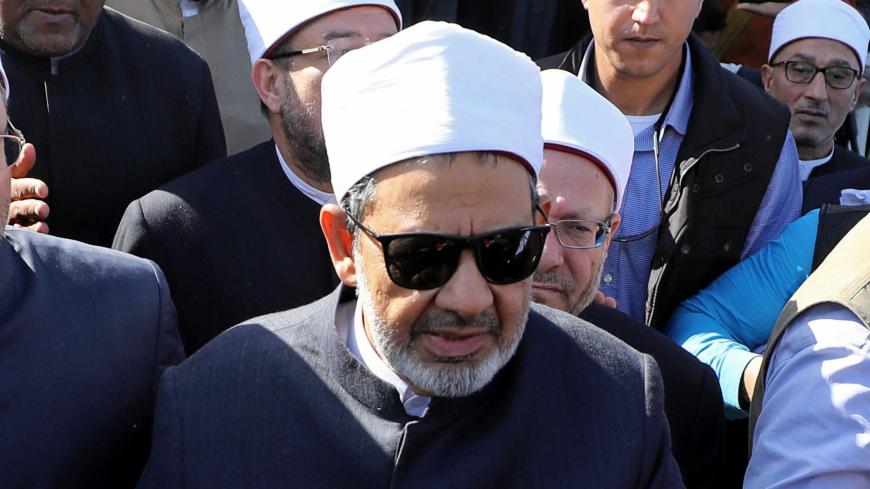 CAIRO — Egypt’s grand imam of Al-Azhar Mosque, Sheikh Ahmed al-Tayeb, has been under fire recently over his comments on polygamy.

“In 90% of cases — and I am not exaggerating — polygamy involves injustice toward the wife, her family and her children,” Tayeb said March 1 during his weekly televised interview broadcast on Channel 1 TV. Al-Azhar’s Twitter account also posted Tayeb’s statements from the interview.

He said, “Polygamy is an example of a distorted understanding of the Quran and the Sunnah of the Prophet.”

Tayeb also said that “polygamy is a right that is restricted by conditions, such as the condition of fairness. If there is no fairness, polygamy becomes haram [Arabic for prohibited]. This issue is not open for experiments.”

Interpreting the verse of al-Nisa in the Quran, which reads, “But if you fear that not you cannot do justice, then (marry) one,” Tayeb said that fear of being unable to achieve fairness is an essential reason for refraining from polygamy. He also stressed that it is forbidden for a man to be unfair toward his first wife.

In response to these comments, some Salafi leaders called March 3 for polygamy to be encouraged for men. They said this would be in the best interest of women and society in general. A social media campaign was launched under a hashtag whose English translation is “let him have many [wives].” The campaign was launched by Salafi preacher Sameh Abdel Hamid Hamouda, a former member of Al-Nour party, which is affiliated with the Salafi movement in Egypt.

Al-Azhar media center issued a statement March 2 clarifying Tayeb’s comments on polygamy. The statement said the grand imam never talked about prohibiting or banning polygamy, but mentioned restrictions on polygamy in light of the injustice it causes women in the present era.

On the same day, the National Council for Women praised in a press statement Tayeb’s position on polygamy. The statement said, “The interpretation by the grand imam of polygamy is that polygamy is a restricted right that must be justified, is subject to the precondition of fairness and is not open to experiments. This [interpretation] emphasizes that Islam has honored women and conferred to them rights that did not exist before.”

Hamouda, both defending and promoting polygamy, told Al-Monitor, “Polygamy is not an injustice to women at all, but is rather in their best interest. Polygamy is a societal solution to the crisis of spinsterhood in Egypt.”

He continued, “It is necessary and important to encourage polygamy among men who can afford it. This would give many unmarried girls the chance to have a family and children before they miss the boat. This would spare them major psychological and societal suffering.”

Hamouda underlined that polygamy should be promoted in order to achieve social harmony.

But member of parliament Amna Nosseir, a professor of Islamic philosophy at Al-Azhar University, has a completely different opinion. She said polygamy at the beginning of Islam was a necessity in light of the nature of society at the time. “Things have changed for contemporary women. Their situation is completely different from what it was centuries ago. Women have acquired a great deal of education, independence and self-reliance and they are now equal to men.”

Commenting on the issue from a religious perspective, she told Al-Monitor, “Islam has stressed that men cannot achieve fairness no matter how hard they try. The Quranic Verse 129 of Ayat Al-Nisa says, ‘And you will never be able to be equal [in feeling] between wives, even if you should strive [to do so].’ Therefore achieving fairness is almost impossible.”

Nosseir added, “Tayeb’s perception of polygamy as an injustice to women is fully consistent with the present social situation of women. This is also true from the religious perspective, which stressed the difficulty for a man to achieve fairness among his wives no matter how keen he was on doing so.”

She categorically refused, however, the idea of a law in Egypt that bans polygamy, as is the case in Tunisia. “I am absolutely against prohibition. But religious institutions and other concerned state institutions ought to raise awareness on this matter and clarify the full picture of polygamy,” she said. “Polygamy is an exception in specific circumstances and is never the rule.”

It should be noted that the Tunisian law prohibits polygamy and even sets sanctions that could include imprisonment against a husband who marries a second wife.

One may say that Tayeb has affirmed that polygamy, in the absolute sense of the word, is an injustice to women and children. This is a major shift in religious discourse and could be seen as a victory for women in light of the determination by the grand imam of Al-Azhar Mosque to restrict polygamy as an exception subject to limits and conditions rather than a rule. This, however, comes in tandem with another clear position by Tayeb refusing any law that categorically bans polygamy.