The outcome of the Sochi summit suggests that Turkish President Recep Tayyip Erdogan’s prospects of launching a new operation in Syria ahead of the March 31 local elections to win back voters disgruntled over economic woes have greatly diminished. 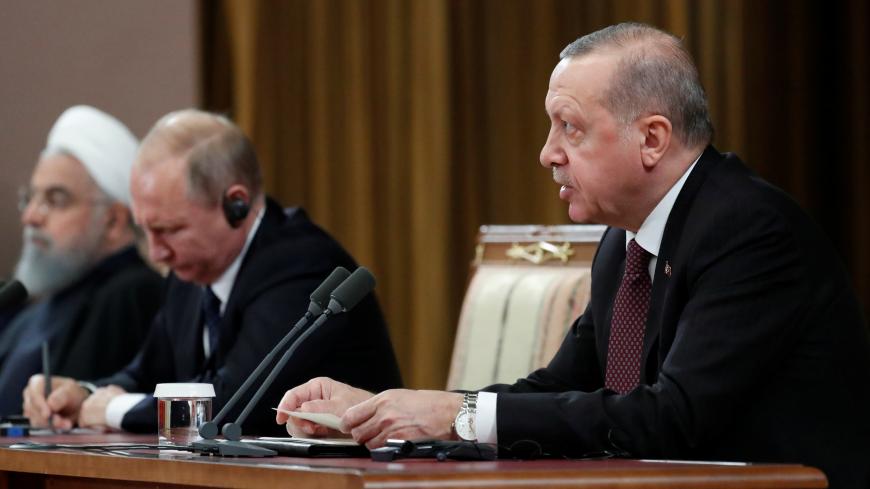 In a speech in late January, Turkish President Recep Tayyip Erdogan used exceptionally strong terms to describe the significance of the March 31 municipal elections. “The latest developments in our region have made March 31 more than just local administration elections. The elections have become a matter of survival, an election of survival for our country,” he told members of his Justice and Development Party (AKP) in Antalya.

Since Erdogan failed to specify what developments made the local elections a “matter of survival,” it was up to us to determine whether such developments had really taken place. The region he referred to could have been no other than Syria. Yet nothing had happened in Syria at the time that posed a direct, close, real and current threat to Turkey; hence, one could hardly claim the elections had become a “matter of survival” for that reason. The two most significant developments were President Donald Trump’s announcement in December that he was withdrawing US troops from Syria and the fall of Idlib to the al-Qaeda-linked Hayat Tahrir al-Sham (HTS) in January. Yet to claim those developments made Turkey’s local polls a “matter of survival” would not have been realistic at all.

There is perhaps a “matter of survival” not for Turkey, but for Erdogan. His concern, so it seems, is to prevent an unmanageable loss of votes for the AKP amid Turkey’s deepening economic crisis. Hence, his attempt to create the perception of a survival threat over unidentified regional developments came across as a move to consolidate the nationalist voter base in a bid to overcome the actual threat, which is the prospect of electoral losses.

A possible step beyond the rhetoric was to take action in Syria and launch a low-risk but high-success military operation ahead of the polls. Two frameworks were already in place for such action. The first was the still-unimplemented timetable that Ankara and Washington agreed in June to cleanse Manbij, a town on the western bank of the Euphrates River, of the People’s Protection Units (YPG), the Syrian extension of the Kurdistan Workers Party (PKK), which both sides designate as a terrorist group. The second was the idea for a “safe zone” on the Syrian side of the border, stretching from the eastern bank of the Euphrates to the Iraqi frontier, to keep the YPG-PKK and regime forces away from the Turkish border.

On the issue of Manbij, Erdogan had already warned Dec. 14, 2018, that Turkish troops would enter the town if the United States failed to promptly remove YPG fighters from the area. No doubt, his message — which he repeated twice later that month — could not be seen independently from the local election agenda.

Ankara may believe that a low-risk military operation in Syria will stir up nationalist sentiment and help it avoid losses in the local polls, but obviously, such an operation cannot take place without a deal with the United States or Russia.

And now, after the Feb. 14 Sochi summit where Erdogan discussed Syria with his Russian and Iranian counterparts, any comprehensive military action to take control of Manbij or set up a “buffer zone” has become highly difficult for Ankara.

The main factor that keeps Ankara from action is the dramatic shift that Trump’s decision to pull out has caused in favor of Russia, the Damascus regime and its ally Iran. The US-Russia balance in Syria had allowed Ankara to increase its clout by engaging in dialogue and collaboration with both sides and playing them against each other. The more this balance caves in, the more Ankara’s importance and influence wane.

In the first notable sign that things have changed, Erdogan said on Feb. 3 that Ankara had maintained relations with Damascus “on the level of intelligence services.” His remarks on the state-owned TRT channel were the first time he revealed intelligence contacts with Syria since his adoption of a regime change policy in 2011. “You should not break ties completely even with an enemy, for you may need those ties one day,” he added.

Obviously, that day had come for ties with Damascus, and the Turkish public had to be prepared to face up to reality.

The new reality dictates that even if Ankara strikes a deal with Washington on a buffer zone before US troops depart, the deal will be inapplicable without Russia’s approval. And hours before the Astana partners convened in Sochi on Feb. 14, Moscow made it clear that the buffer zone issue “must be decided directly by Damascus,” as Foreign Ministry spokeswoman Maria Zakharova put it.

All those signs suggest that the more Russia and Damascus fill the vacuum the United States leaves behind in the coming days, the more Ankara will be pressed to seek more extensive and higher-level contacts with the Syrian regime.

The issue of vacuum-filling could provide context to the remarks Erdogan made on his way back from Sochi, having failed to win a green light for the buffer zone he wants. “A protection force for the PYD and the YPG to the east of the Euphrates is out of the question,” he said, adding, “We will return to implementing our own plans after the United States withdraws. It is not right to reveal them [now]. We want our strategic partners to do their part.” Of note, in his lengthy comments to the media, Erdogan stopped short of reiterating the harsh warnings he had made repeatedly earlier regarding Manbij.

In a Feb. 8 report before the Sochi summit, the Wall Street Journal quoted “current and former US officials” as saying that the Pentagon was preparing to pull all American forces out of Syria by the end of April. If the preparations proceed as reported and the pullout extends beyond Turkey’s March 31 polls — and since Ankara is awaiting the US withdrawal to go ahead with its own plans — one might conclude that Erdogan could reach action phase for his Syria plans only a month after the elections.

Still, it remains dubious whether those plans will really be his own, for even if Ankara insists on going its own way after the US pullout, it will inevitably face strong objections from Russia and the Syrian regime. A more realistic alternative is an Ankara making a deal with the two. Yet it is not only Ankara that would like to strike a deal with Russia and Damascus. The YPG is already known to seek contacts to that effect. Moreover, a US departure without a deal providing guarantees to the YPG and the PKK, Washington’s allies to the east of the Euphrates, would push the two groups into the laps of Russia and Syria. Whether this would please Turkey depends on what status the YPG and the PKK will have vis-a-vis the regime.

Just as the situation in Syria affects Turkey’s local elections, they — vice versa — affect it. Take Idlib, for instance. The fact that the next meeting of the Astana partners will take place in Turkey in April suggests that Russia is not pressing for a major offensive against the HTS in Idlib before Turkey’s local polls, unwilling to put the AKP in a tight spot on the eve of elections since such an operation could unleash a fresh wave of refugees.

Erdogan, meanwhile, continues to portray the elections as a matter of survival. In a campaign speech in Istanbul Feb. 16, two days after the Sochi summit, he said, “Due to the developments in the region and increasing attacks on our economy, the March 31 polls have ceased to be ordinary municipal elections. They are not only municipal but also survival elections,” he said, again without specifying which developments he meant.