Is the extradition of an alleged Muslim Brotherhood member to Egypt a simple bureaucratic glitch or a sign of Erdogan’s change of heart toward the Egyptian organization? 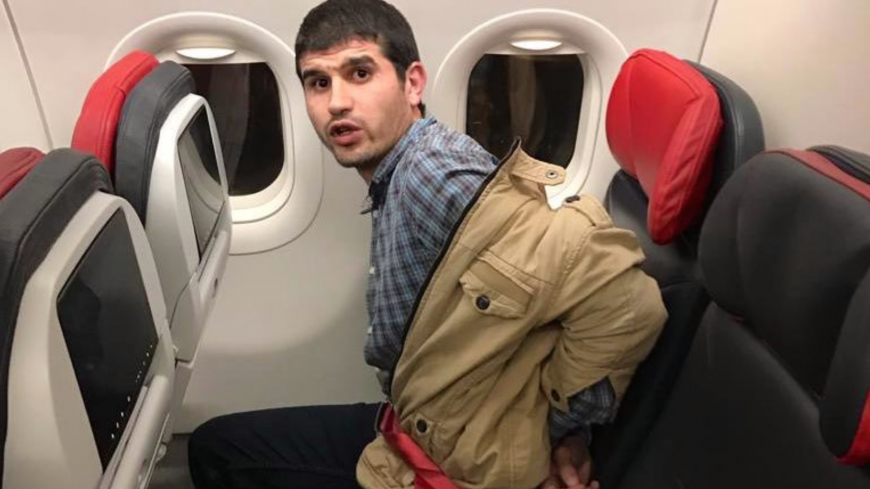 Egyptian citizen Mohamed Abdelhafez Ahmed Hussein is pictured in a plane as he is extradited from Istanbul to Cairo on Jan. 18, 2019. Image uploaded Feb. 8. - Twitter/Bulent Sahen Erdeger

Picture this: A young man buckled in a plane seat with his hands cuffed behind him looking distraught. The man, 29-year-old Egyptian citizen Mohamed Abdelhafez Ahmed Hussein, was extradited to Cairo from Istanbul's Ataturk airport Jan. 18. He was sentenced to death in absentia in the 2015 car bombing that claimed the life of Egypt’s chief prosecutor, Hisham Barakat; 27 others also received death sentences.

It was not until early February that the photo of Hussein in the plane started spreading on social media networks. Almost everyone was surprised, and Islamists were disturbed, by the extradition of Hussein to Egypt, where they say torture is prevalent and fair courts do not exist. Given the Turkish government’s open and relentless support for the Muslim Brotherhood movement, how and why was Hussein returned to Egypt where he may face execution? (He is entitled to a retrial). Are other Muslim Brotherhood members seeking refuge in Turkey in danger as well? Hussein had arrived at the Ataturk airport Jan. 16 without a valid visa on a flight from Somalia.

President Recep Tayyip Erdogan and his Turkish government have passionately supported former Egyptian President Mohammed Morsi, who was toppled by Abdel Fattah al-Sisi in July 2013. Since then, Erdogan has repeatedly called for the release of Morsi. Erdogan’s fervent support for the Muslim Brotherhood was symbolized by his use of the Rabia sign, holding four fingers out with thumb curled in. The sign became synonymous with Turkey's ruling Justice and Development Party (AKP) and its leadership. Erdogan frequently praised the Muslim Brotherhood and even shed tears on television for young members of the movement who were killed, many in the Rabia al-Adawiya Square massacre in Cairo in August 2013;

Given Turkey's enthusiasm for the Muslim Brotherhood, why was Hussein extradited to Cairo? Yasin Aktay, a senior adviser to Erdogan and a columnist for the Islamist Yeni Safak daily, penned a rather confusing column where he claimed Hussein was declared an “inadmissible passenger” as he lacked a proper visa to enter Turkey. Aktay asked, “Did Abdelhafez want to inform them [authorities] about his condition but couldn’t express himself because of the language barrier?” Was there not a single person at the airport who might speak basic Arabic to act as a translator? Is this possible in a city with over a million Arabs and hundreds of Arab tourists arriving and departing daily?

In the meantime, authorities arrested but then released a member of airport cleaning crew for taking and sharing the notorious photo of Hussein with media outlets. Then eight police officers were suspended in the investigation tasked with figuring out how Hussein was extradited to Egypt.

A source close to Erdogan’s palace told Al-Monitor, “No one dares to sign a document of extradition without checking and double-checking with their supervisors. The top echelons must have approved this decision, otherwise they would not have rushed into it. Why should they risk their jobs?”

Why the return of Hussein was rushed is not clear. A young member of the Egyptian Muslim Brotherhood told Al-Monitor, “On Jan. 16, Hussein arrived in Istanbul from Mogadishu. We know that Turkish authorities learned in less than 24 hours that Hussein was on a 'wanted' list from Egypt. We were shocked to hear the next day [Jan. 18] he was on a plane to Cairo. My friends and I are worried for him, but also worried about our own future. The elders of [the Muslim Brotherhood] here live in luxury and more importantly they have security. We think [Muslim Brotherhood] elders failed Hussein. They spoke before they checked properly. We are now even scared to go to a different neighborhood [due to random Turkish police checkpoints].” But the young Muslim Brotherhood member also said, “We think Hussein was sent to his execution because of impatient bureaucrats in Ankara. We also sense this stems from the fact that Erdogan no longer cares much about the brothers. We hear from our sources in Egypt that Erdogan is trying to make amends with Cairo for a variety of reasons. All these reasons point to the fact that the Turkish economy is hitting rock bottom hard; was Hussein the first sacrifice on that path? Erdogan arrested Turkish Islamists. We have no reason to believe we are indispensable.”

Although pro-AKP media outlets tried to portray this as a minor issue, independent Islamists were vocal about their suspicions that the government extradites more Islamists quietly. One Turkish Islamist religious order member said, “We are not a part of [the Muslim Brotherhood], but we will stand for justice for Muslims everywhere. If we do not make noise, AKP officials will extradite any Islamist. We know since the Mavi Marmara incident that Islamists are disposable unless we stand united and make a loud sound.”

The puzzling situation raises the question: Is Erdogan’s attachment to the Muslim Brotherhood withering away? The question is crucial, particularly for the other members of the movement in Turkey.

When Al-Monitor insisted upon getting deeper answers about the state of Erdogan’s ties with the Muslim Brotherhood, one pro-AKP academic made rather surprising comments to Al-Monitor. He said, “Saying Erdogan is close to the Muslim Brotherhood is not realistic. It is a line that Israel wants to you to believe. Perhaps three decades ago, Erdogan followed a line similar to the Muslim Brotherhood of that era, but that is what most Islamists were at the time. Erdogan’s political success was possible because he was able to surpass that limited ideological borderline of the Muslim Brotherhood.” When asked about the seeming contradictions involved where the AKP electoral coalition combines the Rabia sign with the gray wolf sign (a symbol of Turkish ultra-nationalists), the same scholar said, “The Turkish public is able to embrace both ideas simultaneously and to assume they are mutually exclusive is an elitist arrogant approach.” Although crowds use these hand signs simultaneously, as they symbolize the AKP coalition with the ultra-nationalist Nationalist Movement Party, there are a significant number of supporters on both sides who are not content.

A video recorded in Duzce province shows young members of the ultra-nationalist Gray Wolves shrouding a newly erected Rabia statue with the flag of their movement. Similarly, several Islamists are critical of Turkish nationalism, as they embrace Muslim identity first and foremost. Indeed, Erdogan's Rabia gestures are not as narrow in meaning as those of the Muslim Brotherhood, as the Turkish president calls for “one nation, one flag, one country, one state.”

Erdogan is gradually realizing that the Syrian civil war will come to an end and reluctantly warming to the idea that he will have to make amends with Damascus, Riyadh and Cairo all at once. Lucrative relations with Qatar alone are not sufficient. In addition, Turkey’s desperate need of funds means quixotic foreign policy statements are too costly. Still, Erdogan has sincerely embraced the Muslim Brotherhood and he will keep providing its members a safe haven unless they become a liability for him or until they can be traded up for a more lucrative option.