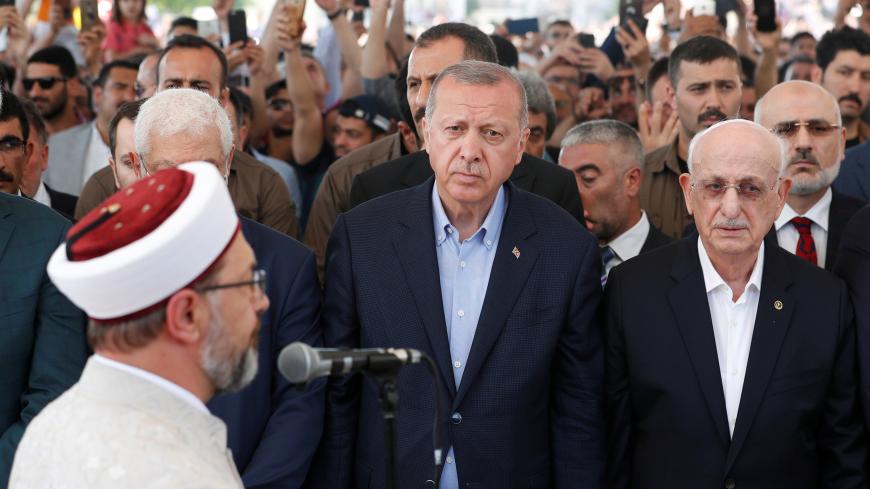 Crowds gathered for the ritual chanted “God is Great” as Erdogan capped the prayers with an impassioned speech lionizing his onetime Muslim Brotherhood ally.

Erdogan openly questioned the circumstances of Morsi’s death. “I don’t believe it was normal,” he said, adding, "Morsi had wanted to be buried in his native village upon his death but had been denied this last wish.” Erdogan labeled Egypt’s current President Abdel Fattah al-Sisi a “murderer” who had overseen the executions of many people, prompting a fresh volley of Islamist slogans.

The scenes were repeated at mosques in all 81 of Turkey’s provinces, where funerals “in absentia” were held on orders from the government, an extraordinary gesture signaling the importance bestowed on Egypt’s first democratically elected leader.

In Ankara, Ali Erbas, the president of Turkey’s state-run religious affairs directorate or Diyanet led the prayers at the historic Haci Bayram mosque as hundreds of faithful including Justice Minister Abdulhamit Gul and presidential spokesman Ibrahim Kalin mouthed verses of the Quran. Erbas wished peace upon Morsi’s soul and intoned that the Egyptian leader had imbibed the “sherbet of martyrdom,” one of the highest honors for a practicing Muslim.

The UN human rights commission called for an inquiry into Morsi’s death. The 67-year-old was hastily interred on Tuesday just hours after he collapsed in the Cairo courtroom where he was being prosecuted for espionage. The call was echoed by Human Rights Watch, which said his treatment had been “horrific.”

Erodgan lashed out at Western governments today, saying they had stood idly by as Morsi was overthrown, jailed and tortured in detention, while cavorting with the Egyptian dictator whose invitation he had spurned.

Elsewhere in the Turkish capital, hundreds of protesters bearing signs that read, “The putschists will be defeated, the Islamic movement will prevail” gathered outside the Egyptian Embassy on Ataturk Boulevard. Many flashed the four-finger salute or “rabia” sign symbolizing Brotherhood resistance to Morsi’s overthrow in 2013.

Morsi, a US-educated engineer, was closely associated with Erdogan, a fellow sympathizer of the global Muslim Brotherhood movement. But his year in power was marked by controversy, including accusations that he was erecting an Islamist dictatorship. Matters came to a head when Morsi issued an edict declaring that his presidency would not be subject to any judicial oversight until a permanent constitution was adopted by Egypt’s newly formed Constituent Assembly. Tunisia’s determinedly moderate Muslim Brotherhood leader Rached Ghannouchi and Turkey’s like-minded former President Abdullah Gul were among those who cautioned Morsi to tone things down. But it was too late.

Morsi’s ouster and subsequent detention in July 2013 by then Defense Minister Abdel Fattah al-Sisi sent Ankara’s relations with Cairo into a tailspin. Turkey expelled the Egyptian ambassador and Egypt reciprocated.

“It was an extremely traumatic moment for Erdogan and his Justice and Development Party and marked the end of his ambitions to lead the Sunni Muslim world,” said Behlul Ozkan, an associate professor of international relations at Istanbul’s Marmara University. Coming on the heels of the mass anti-government Gezi protests in Turkey, Morsi’s downfall was seen as a portent of a broader Western conspiracy targeting Erdogan and like-minded Brotherhood-friendly leaders in the Muslim world. The failed July 2016 coup to overthrow Erdogan was viewed through the same lens.

This mindset was palpable at today’s prayers. Erdogan said, “You know there are Sisis lurking among us here, and they have been warning me: ‘Your end will be the same as Morsi’s.'” Some say Erdogan will cynically seek to leverage the outrage stirred by Morsi’s death to help his party’s faltering campaign in the run-up to the Istanbul mayoral redo vote on June 23. Opinion polls show the main opposition candidate, who narrowly won the March 31 vote in the country’s biggest city that was annulled under pressure from Erdogan, leading his Justice and Development Party (AKP) rival by several percentage points.

Mindful of the effect of Morsi's death on disaffected AKP voters, the leader of the main opposition Republican People's Party, Kemal Kilicdaroglu, lamented, "He lost his life in a courtroom. We wish God's mercy on him. We would have wished Mohammed Morsi to be buried with a presidential ceremony."

Still, the feelings aired by Erdogan today will have likely sprung from his heart.

Erdogan’s generation of Turkish Islamists was deeply influenced by Egypt’s Muslim Brotherhood, in particular the writings of its founders Sayyid Qutb and Hassan al-Banna, Ozkan told Al-Monitor. Their work was translated into Turkish in the 1960s. Banna’s son-in-law, Said Ramadan, who rose to prominence in the Brotherhood, spent time in Turkey.

Meanwhile, thousands of Turkish immigrant workers in Germany were influenced by Brotherhood members granted refuge from Egypt’s military leaders there. A kinship rooted in a shared sense of marginalization and victimhood emerged.

But once in power, Erdogan and the AKP gradually came to “accept elections results only when they win, as most recently witnessed in Istanbul,” Ozkan noted. Whether Morsi would have followed the same path remains an open question. He no longer can prove otherwise.