The sudden death of jailed Muslim Brotherhood leader and former Egyptian President Mohammed Morsi in court has raised questions about the future of the outlawed group and the conditions of prisons in Egypt. 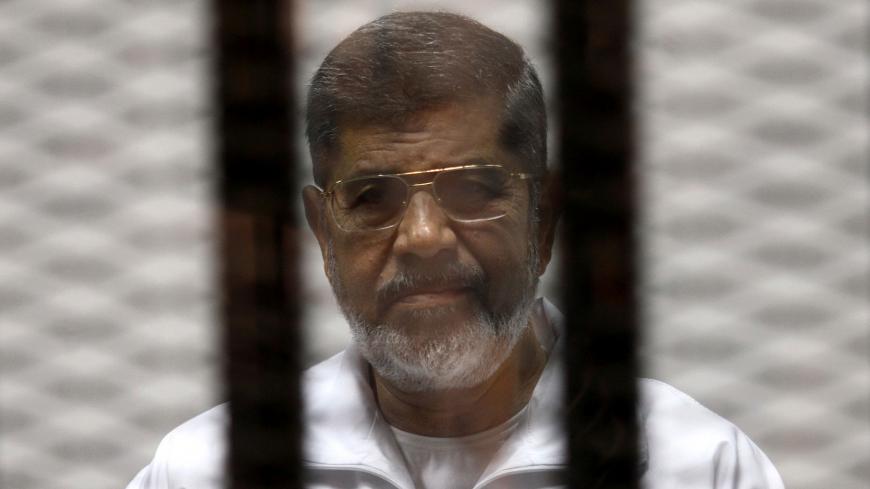 Ousted Egyptian President Mohammed Morsi is seen behind bars at a court in Cairo, Egypt, May 8, 2014. - REUTERS

On June 17, former Egyptian president and leader of the Muslim Brotherhood Mohammed Morsi died unexpectedly of a heart attack in court. Morsi collapsed in his cage at a hearing, shortly after speaking during his trial over alleged espionage for the Palestinian Hamas movement.

His sudden death caused a stir among rights and political circles and raised demands to re-examine the conditions of Egyptian jails as well as questions about the future of the Muslim Brotherhood.

Morsi was a prominent leader of the Freedom and Justice Party, the Brotherhood’s political arm, before he became the first elected civilian president in the wake of the January 25 Revolution in 2011. However, he only remained president for one year, following which the army, led by President Abdel Fattah al-Sisi (who was defense minister at the time), toppled him on July 3, 2013, following wide public protests.

Since his ouster, Morsi had been incarcerated. He has faced trial in several cases of incitement to violence, escape from prison and collaboration with foreign parties. He was sentenced to life in prison.

As of the evening of June 17, no top Egyptian officials had commented on Morsi’s death.

Observers Al-Monitor spoke with said Morsi’s death might push the Egyptian government to reconsider its policies concerning the Brotherhood.

Prosecutor Nabil Sadeq wrote in a statement, “Morsi died in court after five minutes of addressing the judge. When the session was adjourned, Morsi fainted and collapsed in the cage, and he was transferred to hospital, where he was pronounced dead.”

Sadeq ordered the surveillance cameras in the courtroom to be reviewed, Morsi’s body examined and statements taken from the defendants who were with Morsi at the time of his death. He instructed confidentiality on Morsi’s treatment in jail and ordered the appointment of a forensic committee to prepare the report on the cause of death.

In another statement, Sadeq ordered Morsi’s burial after the examination.

Morsi’s lawyer, Abdul Menhem Abdul Maqsoud, told Al-Monitor, “The late president addressed the court for a few minutes during which he called for a special trial, rather than the one he was undergoing. He told the judge that he held many state secrets, as he had been Egypt’s president, but that he could only reveal them before a special court.”

He added, “The judge adjourned the session after Morsi finished talking. Then, we heard a loud thud inside the glass cage, and the other defendant started screaming. We then realized Morsi was dead.”

The lawyer said that after funeral prayers in Torah prison’s mosque, the authorities allowed Morsi’s family and lawyers to have a final viewing and allowed them to bury Morsi at a cemetery in Nasr city in eastern Cairo.

Security agents prevented reporters and photographers from entering the cemetery and taking photos.

His son, Ahmed, said in a Facebook post that authorities refused to allow Morsi be buried at the family's cemetery in his hometown in Sharqiya province, and he was buried instead in a Cairo cemetery dedicated to prominent Islamists.

The Muslim Brotherhood, which the Egyptian government designated a terror group in 2013, blamed the authorities for Morsi’s death. In a statement, the group said, “The authorities deprived Morsi of treatment and medication in jail, and they did not allow his family and lawyers to visit.” It called for “forming an independent investigation committee to reveal the cause of death.”

In response to the Brotherhood accusations, a state medical examiner said that Morsi died of a sudden heart attack in court. He added in a statement, “Morsi underwent medical examination in February 2017 and he was diagnosed with several diseases including high blood pressure, high blood sugar and chronic neuritis.” He said Morsi received constant medical care and his health was not neglected either inside or outside jail.

Former Assistant Interior Minister Mohammad Zaki told Al-Monitor, “Morsi died publicly in front of his lawyers and inmates, and there was nothing mysterious about his death.” He added that Morsi’s passing will not lead to dangerous security repercussions or violent reactions in the country, pointing to the calm following the death of former General Guide of the Muslim Brotherhood Mahdi Akef in court in September 2017.

Journalist Kamal Habib told Al-Monitor that the Egyptian government is still handling the Muslim Brotherhood from a security perspective and has stepped up its violent repression of the group. But Morsi’s death might prompt the government to reconsider its policies and find a new way to deal with the group.

Habib expects Morsi’s death to unite the divided Brotherhood and bring the group back to the spotlight. He noted that the Brotherhood is divided between those who wanted Morsi to return to power and those who thought such a thing was impossible.

Professor of political science at the American University of Cairo Mustafa Kamel al-Sayed does not believe that Morsi’s death will affect the political scene in Egypt, given the strong grip of a leadership that is unlikely to change its stance toward the Muslim Brotherhood. He told Al-Monitor, “The Muslim Brotherhood is certainly angry because of what happened, but they can do nothing. The ruling class has put its foot down and it won’t allow any straying from its policies.”

Sayed added, “The repercussions might include protests from foreign governments or human rights groups, but they will not affect the ruling class.”

In a statement, Amnesty International called Morsi's death “deeply shocking" and said it "raises serious questions about his treatment in custody. The Egyptian authorities must immediately order an impartial, thorough and transparent investigation into the circumstances of his death, as well as his detention conditions and his ability to access medical care.”

Political sociology researcher and columnist for Al-Masry Al-Youm Ammar Ali Hassan told Al-Monitor, “The current government will not change its policies toward the Brotherhood because it feels the group belongs to the past and has been defeated. The current government snatched the rule from the Muslim Brotherhood, and all countries of the world recognized [the ouster]. Therefore, the government does not have to change its policies.”

However, Hassan said, that Morsi’s death will prompt the Egyptian authorities to examine prison conditions. He added, “It is possible the Muslim Brotherhood will discuss its future after Morsi’s death, as he was for many of its members their legitimate leader, and they had been calling for his return to power.”

Hassan noted that reconciliation with the Muslim Brotherhood could come about, provided the group admits it was removed from power through public protests and apologizes to the people for its violence.