Netanyahu pretends occupation does not exist

Israeli Prime Minister Benjamin Netanyahu and his associates believe that ignoring the occupation would make it nonexistent. 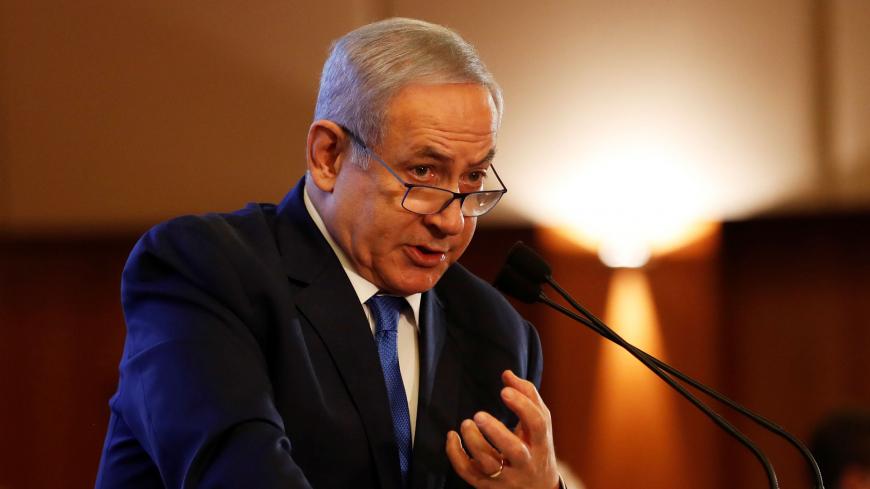 The April 9 elections to the 21st Knesset will be the 15th time since the 1967 Arab-Israeli War that Israel’s citizens and soldiers will exercise their democratic right while ruling over millions of disenfranchised Palestinians. There were times when the exhortation “down with the occupation” merited a place of honor in the political discourse, alongside the word “peace.” Under the decadelong regime of Prime Minister Benjamin Netanyahu, such talk has made way for a discourse of annexation and incitement. It is as if not saying the word makes the occupation disappear.

On Feb. 16, Channel 13 news anchor Oshrat Kotler, referring to a report about Israeli soldiers who beat up two Palestinian detainees, commented that 18-year-old soldiers were deployed in the territories and “come back human animals. That’s the result of the occupation.” Her comment generated outraged reactions on the political right, not because she had used the word “occupation” — they were careful to sideline that — but because she had “dishonored Israeli soldiers.” Her bottom line — “that’s the result of the occupation” — was ignored. According to the right-wing worldview, if you do not react to the occupation, it does not exist.

How does a state that boasts of being a democracy deal with its continued control of another people? There are various ways. Netanyahu, for example, depicts an alternative reality. Thus, in a March 2018 speech at the annual convention of the pro-Israeli American Israel Public Affairs Committee lobby in Washington, he had the supreme gall to compare the values instilled in Americans by Abraham Lincoln and Martin Luther King — “freedom, justice, peace and hope” — with those cherished by Israel, while ignoring Israel as an occupying, discriminatory power that oppresses and depresses. It would be interesting to know what value he thinks is embodied in his warning to right-wing voters on election day in March 2015 that Israel’s Arab citizens “are heading to the polling stations in droves.”

The chair of the New Right party, Naftali Bennett, wondered in 2013 how anyone could call Israel an occupier in its own home. “After all, this is our home,” he said. Two years later, Deputy Foreign Minister Tzipi Hotovely of the Likud Party demanded that Israeli diplomats “return to the basic truth about our right to this land” when representing the country abroad. In addition to discussing Israel’s security and diplomacy needs, she added, “You should stress the biblical and historic link of the Jews to the Land of Israel.”

The secular right has its own ways of justifying the occupation. There is the argument that the Palestinians repeatedly reject Israel’s terms (all justified, they think). Then there is the one that the Palestinians are a bunch of terrorists who will turn the West Bank into another Gaza Strip and threaten residents of the nearby central Israeli town of Kfar Saba as they do residents of the Gaza border communities in the south. The real pros cite updated legal arguments against the “fake occupation” from a 2012 report by former Supreme Court Justice Edmond Levy whom Netanyahu appointed to examine the status of the settlements in Judea and Samaria (the biblical names of the West Bank).

Levy’s three-member committee determined that “Judea and Samaria” are not under military occupation because the 1917 Balfour Declaration, the 1920 San Remo conference and the 1922 British Mandate issued by the League of Nations all designated the land as part of a future Jewish state. The panel also concluded that although the 1947 UN Partition Resolution designated land for the establishment of an Arab state alongside the Jewish one, the resolution for an Arab state was never implemented and thus its validity had expired. That same argument, according to the panel, holds for the Jordanian annexation of the area in 1950, which the international community never recognized. Nonetheless, the committee avoided defining the status of the West Bank, noting that successive Israeli governments had avoided its annexation.

The committee failed to mention that in 2003, the UN Security Council unanimously adopted the road map for peace in the Middle East (Resolution 1515), saying a permanent solution to the Israeli-Palestinian conflict would “end the occupation that began in 1967.” According to the road map, a peace agreement would be based, inter alia, on the principle of land for peace and on the 2002 Arab Peace Initiative that offered Israel security and normalized relations with the Arab world in return for the establishment of a Palestinian state within the 1967 borders. (In later negotiations, the words “land swaps” were added.)

Netanyahu was a senior member of the defense Cabinet under Prime Minister Ariel Sharon, which approved the road map with certain reservations (which were rejected). “You can dislike the word ‘occupation,'” Sharon told critics within the Likud in 2003, “but that is what is happening … keeping 3.5 million Palestinians under occupation is a terrible thing — both for Israel and the Palestinians. … This cannot continue endlessly.” Sharon asked his colleagues whether they want Israel to remain forever in the Palestinian towns of Jenin, Nablus, Ramallah and Bethlehem. The Israeli right of 2019 would have answered, “Why not?” In fact, who’s going to stop them? Israel’s friend US President Donald Trump? Israel’s allies from the central European Visegrad Group? The Jewish voters who are convinced there is no such thing as an occupation? The monthly Peace Index survey conducted on the 50th anniversary of the 1967 war found that 62% of Israelis believe Israel’s control of the territories is not an occupation. On the political right and center, only a minority — 12% and 37%, respectively — believe it is an occupation.

Israeli media has come to the conclusion that stories about human rights abuse in the West Bank bore the Israeli readers and audience. Thus, reports about land theft by settlers or about assaults against Palestinian shepherds have disappeared from the newspapers and TV headlines.

Only on the left, the smallest of the three political blocs, a sweeping majority (86%) believes the correct definition of the situation is “occupation.” However, many on the left are troubled mostly by the occupation’s damage to Israeli Jews. For example, Brig. Gen. (Res.) Ilan Paz, who was head of the Civil Administration in the West Bank, wrote this week on Facebook that occupation corrupts, as anchor Kotler said. Few on the left talk about the suffering inflicted by the occupation on millions of Palestinians who have never known a day of freedom. In fact, only very few ever visit the territories and listen to its residents, jailed as they are among Israeli settlements and outposts.

Raya Yaron, the spokeswoman of Machsom Watch, an organization that monitors Israeli troop conduct in the territories, told Al-Monitor that not a single Knesset member had ever joined a tour offered by the group in the region. Dean Issacharoff, the spokesman of the anti-occupation group Breaking the Silence, told Al-Monitor the organization enjoys support from the left-wing Meretz Party and the Arab Joint List. He made favorable mention of Knesset member Ksenia Svetlova, a member of the Hatnua Party led by Tzipi Livni, the one-time Likud member who crossed the lines to become one of the peace camp’s most prominent advocates. Livni and Svetlova realized that the occupation is the greatest threat to Israel’s democracy and its Jewish identity. Livni announced Feb. 18 that the party will not run in the upcoming April elections. And so, neither she nor Svetlova will be returning to the Knesset after the elections. Nor is there any guarantee that Meretz will be there, either.