For Israeli right, there is no occupation

The Israeli government's denial of the occupation has led it to intimidating those who dare acknowledge its existence or use the word "occupation." 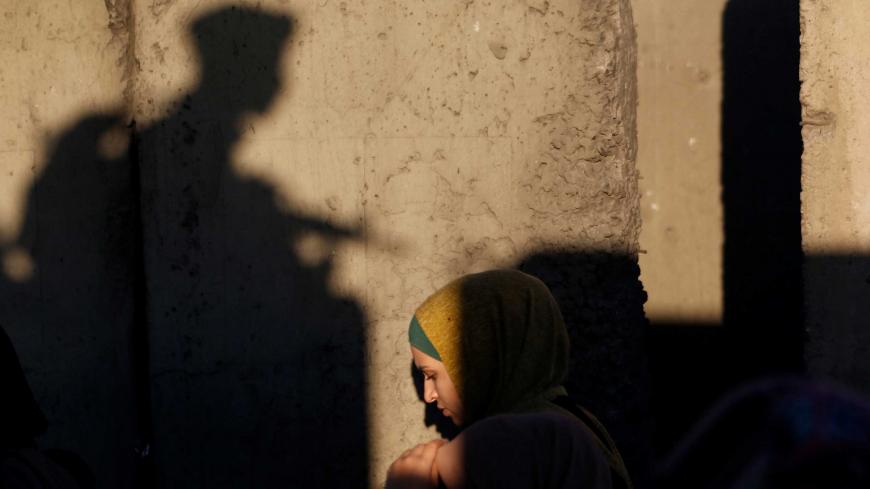 A Palestinian woman makes her way through Israeli Qalandia checkpoint near the West Bank city of Ramallah, June 16, 2017. - REUTERS/Mohamad Torokman

Why did Israel revoke the press credentials of Al Jazeera correspondent Elias Karam? He has not been accused of inciting violence. He did not commit the ultimate sin of calling for anti-Israel sanctions. He has not even advocated a boycott of Israeli settlements in the occupied West Bank. Karam, an Israeli Druze who identifies as Palestinian, did not sound off about the proposed Nationality Law that if adopted would anchor in the law that he and others like him are second-class citizens. Karam is being punished for using his mic and his camera to protest Israel’s occupation of Palestinian lands.

“As a Palestinian journalist who is in an occupied area or a conflict area, journalistic work is an integral part of the resistance and of political and educational action,” Karam said in a May 2016 interview with the Arabic-language TV network Dar al-Iman. “A journalist fulfills his role in the resistance through his pen, voice or camera, because he is part of this [Palestinian] nation and is resisting in his unique way.”

Dozens of Jewish Israeli journalists, this one included, can sign off on Karam’s defense. They, too, oppose the occupation and write and speak out against it, describing injustice and oppression and even encouraging decisive action by the international community to end it.

Prime Minister Benjamin Netanyahu going after the Qatar-based network was, in fact, warning all foreign media and Israeli journalists that a similar fate will befall anyone who deviates from the party line. Karam is not the first Israeli journalist to pay for stepping out of line and will probably not be the last. At the beginning of May, Israel refused to renew the work permit of Derk Walters, correspondent of the Dutch newspaper NRC Handelsblad. The Government Press Office, which operates under the Prime Minister’s Office, accused the reporter of “hostile and biased coverage” of the situation in the Israeli-occupied West Bank city of Hebron.

Prime Minister Benjamin Netanyahu going after the Qatar-based network was, in fact, warning all foreign media and Israeli journalists that a similar fate will befall anyone who deviates from the party line.

“Occupation” is the key term in the Palestinian narrative describing the conflict with Israel. It is also one of the fundamental terms in the agenda of the Israeli left and of the international community that envisions a peaceful resolution of the conflict by establishing a Palestinian state neighboring Israel. On May 26, 2003, the day after Prime Minister Ariel Sharon's government approved the US-sponsored “road map” for peace with the Palestinians, Sharon said, “Keeping 3.5 million Palestinians under occupation is a bad thing, in my opinion.” He went on to lambast members of his ruling Likud, asking, “You want to remain forever in Jenin, Nablus, Ramallah, Bethlehem — forever?” In these unprecedented remarks, the leader of the Israeli right added, “You can dislike the word, but that is what’s happening, it’s under occupation.” If a member of the Likud were to express himself the same way today, he would be politically axed by coalition chairman and Knesset member David Bitan.

The government of Israel is waging a no-holds-barred war against the occupation. It is not, however, against Israel’s control over lands it annexed in 1967 or its 50-year rule over millions of Palestinians. Rather, the enemy is the very term “occupation.” There is no occupation, government spokespersons claim, because there never was an occupation. There is therefore no need to end it.

Education Minister Naftali Bennett has said as much in no uncertain terms: A people cannot be called an occupier of their own land. This is the ideology he consistently tries to instill in all Israeli schoolchildren. Netanyahu cannot afford to lag behind his bitterest rival for leadership of the Israeli right. Using Communications Minister Ayoub Kara and the Government Press Office, he is striking out at the media, and, indeed, the word “occupation” is gradually disappearing. Israeli radio and television stations no longer talk about events in the “occupied territories,” instead calling them by their biblical names, “Judea” and “Samaria.” In addition, human rights organizations are having a hard time “selling” stories to television news editors about violence by soldiers and settlers against Palestinian civilians.

The battle against the occupation is not limited to the media. Culture Minister Miri Regev, who formerly served as chief military censor, has been appointed commanding officer on the theater and cinema front. Her current target is “Foxtrot,” the new movie directed by Samuel Maoz that has been nominated for Israel’s top movie award, the Ophir Prize. The film examines acts of violence against Palestinians by a group of Israeli soldiers at a roadblock. Roadblocks are a tried and tested tool of occupation, but if there is no occupation, there are also no roadblocks. If there are no roadblocks, there are no soldiers, there is no violence, and there is no reason to make movies about it.

Regev did not bother watching the film before announcing that her office would no longer support “such displays of contempt for the state and its symbols.” She did not watch the television show “Megiddo” either before promising to withhold state support from the production. The series described the lives of Palestinian security prisoners and of their jailors in an Israeli prison, but if there is no occupation, how did Palestinians from Nablus and Jenin wind up in an Israeli jail?

The struggle against the “occupation” has exceeded all expectations. At the end of May, the steering committee of the Acre Theater Festival decided to disqualify Einat Weitzman's play “Prisoners of the Occupation,” which is based on stories and letters written by Palestinian prisoners in Israeli jails.

Director Udi Aloni examined all 30 feature films produced in Israel over the past two years and found that only three — his own “Junction 48,” “Foxtrot” and “Personal Affairs,” by Maha Haj — had engaged in direct political criticism. He believes this proves moviemaking in Israel has fully internalized systemic political censorship. Regev has also reaped rewards in her anti-occupation battle on the country’s theater stages. Budgetary threats are slowly erasing the occupation from the repertoires and agendas of Israeli artists. Theaters that in the past refused to appear in the occupied territories are offering their latest hit plays and concerts for the coming season on the stages of the settlement towns of Ariel and Kiryat Arba. Israel’s top theaters — Habima, Cameri, Beit Lessin, Gesher and the Israel Camerata — will all be putting on productions in those settlements.

Draconian legislation impeding fundraising abroad, along with vitriolic incitement, are also undermining the courageous struggle being waged by human rights groups against the occupation. Not against the term “occupation,” but against the occupation that ruins the lives of Palestinians and eats away at everything that is good and honorable in the Israeli media and on the culture scene.