Palestinian youths are infiltrating Israel, hoping to get caught and sent to prison, while Palestinian parents facing economic crises are abandoning their sick infants at the Erez border crossing, while attempting to search work in Israel. 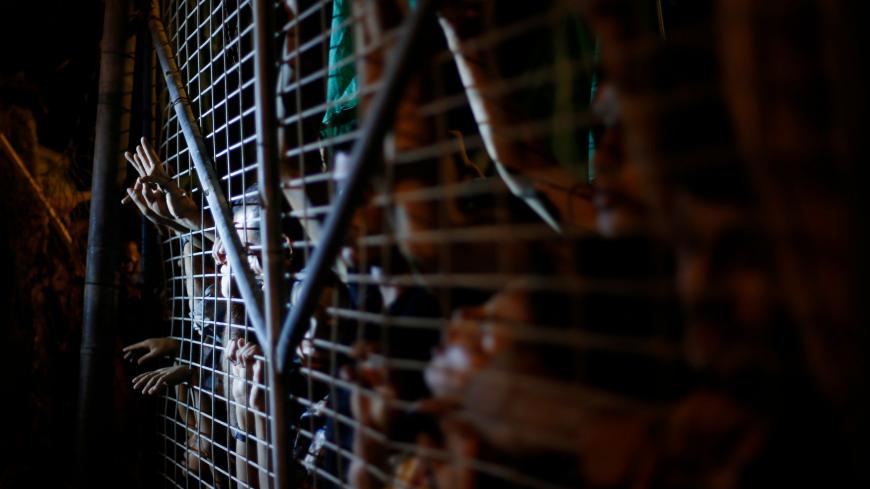 Until a few weeks ago, Israel’s security establishment believed that Hamas has no interest in a comprehensive armed conflict with Israel. Instead, it was thought, Hamas would prefer talks, under Egyptian mediation, leading to some kind of arrangement. The negotiation process, even if it would have been a long one, was expected to lead to a relief in the closure. Meanwhile, Qatari financial aid allowed the Hamas leadership to reduce pressure, pay salaries to the employees of the local government and show the Palestinian population that they are headed in the right direction.

But that’s all over now. Hamas is disappointed with the Egyptians. After all, even if they haven’t cut off all contact with the Gaza Strip, they show no motivation whatsoever to bring Israel and Hamas to any kind of arrangement. Then there is the Qatari aid, which blew up in Hamas’ face. It was already too late by the time the Hamas leadership realized that the damage to its image caused by that aid was much greater to the group than its utility.

Given these circumstances, the humanitarian crisis in Gaza is alive and kicking. What makes it different this time is that after several months of optimism there is no hope for any positive change. This is the most disconcerting scenario, at least as far as Hamas is concerned. There is no war, but there is no hope either. All that's left is the continuing deterioration of Gaza’s economic situation.

It is not just Hamas that’s worried either. The current situation is setting off red warning lights on the Israeli side, too. The Israel Defense Forces (IDF) now believe that Hamas could initiate an armed conflict with Israel and be willing to absorb the cost of fighting, if it would turn world opinion on its behalf, put Gaza back on the international agenda and get the international community involved. According to a Haaretz report Feb. 13, as a result of the assessment of the Military Intelligence Directorate (Aman) that Hamas will try to drag Israel into a full-blown war, Chief of Staff Aviv Kochavi has ordered preparations for fighting in Gaza to be placed at the top of the IDF’s list of priorities. Similarly, he ordered that a group be formed to identify “high quality targets” in the event of some potential operation.

In most circumstances, the research units of the Military Intelligence Directorate and the Shin Bet rely on the collection and analysis of high-quality intelligence. That’s not necessary when it comes to the Gaza Strip. There is no need for quality intelligence to determine that the humanitarian situation in Gaza has been spiraling toward disaster over the past few months.

Reports from the Gaza Strip have been warning ever since the closure was imposed 12 years ago that the humanitarian crisis is worsening and that the pressure cooker is about to explode. Still, Gaza and Hamas have always managed to survive somehow. One of the reasons for this is that every so often, Israel and Egypt have increased the flow of oxygen to Gaza, namely opening the crossing points for produce to enter, for laborers to exit, and so on.

There is, however, one more parameter that isn’t usually taken into account in analyses of the many long years of closure. The generation now growing up in Gaza was born into this severe crisis and have already reached their teens with no foreseeable way out. Their only hope is to participate en masse in the Friday demonstrations along the border fence with Israel or to find other ways to survive.

Al-Monitor and other news outlets have already reported on certain phenomena that Palestinian journalists in Gaza avoid covering out of shame, but also out of fear of the Hamas reaction. These include such pressing issues as prostitution, drug abuse and crime. On the other hand, there have been a few individuals who somehow managed to escape from the Gaza Strip through the Rafah crossing and reach other places in the world, particularly Europe. As far as the Gaza youths are concerned, there is no possibility of reconciliation with the Palestinian Authority as long as Hamas rules Gaza so high-handedly. Nor is there any chance of an arrangement with Israel. What this means is that the only option they have left is to escape, since staying means living in a constant state of crisis. And that's exactly what some of them are doing, if they happen to get a chance; they are fleeing from the Gaza Strip.

Over the past few months, the Southern Command has seen a dramatic rise in efforts by young people to flee Gaza into Israel. The IDF has always considered illegal border crossings from the Gaza Strip into Israel as attempts by Palestinians to commit acts of terror or to place bombs alongside the border fence. More recently, however, there has been a new phenomenon of attempted border infiltrations for reasons of misery. More than 15 Palestinians, most of them young men and boys, have been caught doing this since the beginning of 2019. While they were armed with a knife, their primary objective in crossing the border was not to commit some act of terrorism but to get caught, tried and sent to prison in Israel. At least there, they can be sure that they will not go hungry.

An Israeli security source told Al-Monitor that many young people try to cross the border every day but give up and draw back when the security forces on the ground fire warning shots at them, or use loudspeakers to warn them not to get any closer. Sometimes they return and even manage to cross the fence, but they are usually rounded up and returned to Gaza, despite their protests that Hamas is waiting for them on the other side.

Another phenomenon that offers further evidence of the terrible state of affairs in Gaza was described Feb. 7 by the Coordinator of Government Activities in the Territories (COGAT), Maj. Gen. Kamil Abu Rokon, in an Arabic-language post on the COGAT Facebook page. He told the story of a four-year-old Palestinian boy who was abandoned by his father at the Erez border crossing while returning from medical treatment in Israel. After leaving his son at the border crossing, the father fled back into Israel, hoping to find work as an illegal immigrant. According to Abu Rokon, this was not the first time that something like this happened. Several toddlers and children are abandoned by their parents at the border crossing every month.

In a statement to the press, the head of COGAT's Coordination and Liaison Administration for Gaza, Col. Iyad Sarhan, said, “As a father myself, I do not understand how a parent abandons his child and leaves him in the hands of a stranger without worrying about his welfare and safety.”

Sarhan is well-aware of the situation that has been created in the Gaza Strip. He handles thousands of requests a month from Palestinians who want to enter Israel for medical treatment, and knows that they do not make a conscious choice to abandon their children, but rather, act out of sheer desperation. In many cases, these are parents who can not support or take care of their families, so they choose to try their luck and stay in Israel, hoping to make a little money, even if they are fully aware that they could get caught and sent to prison.

Even if they are described in statements to the press as “deleterious incidents,” the Civil Administration refers to them as “human” stories and considers them very painful but public intelligence that offers a much clearer picture of the situation in Gaza than any document produced by the Military Intelligence Directorate.

Chilling military predictions foresee no improvement in the Gaza Strip in the near future. Talks about an arrangement have been put on hold as Israel is in the midst of an election campaign, and even when that is finally over, it will still take months or even a year to form a coalition and put together a government that is willing to renew the indirect talks with Hamas. In Gaza time, that may as well be an eternity.