Israel and Hamas are trapped in the same dilemma: avoiding escalation on the Israeli-Gaza border requires cooperation between them, but such cooperation portrays each side as weak. 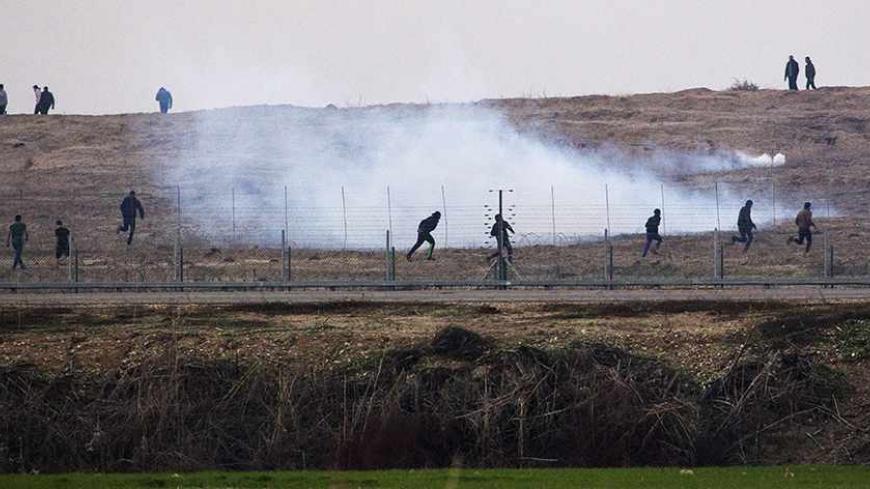 The Gaza Trap. That’s the term used by the intelligence community in the Israel Defense Forces (IDF) for the enormous dilemma that Israel faces whenever things heat up along the border with the Gaza Strip. The rationale guiding the decision-makers in Jerusalem is to establish a balance of deterrence and strike at Hamas targets, whether military or civilian, whenever there is a serious security incident that cannot be overlooked. That’s what happened on Dec. 24 after Salah Abu Latif, 22, an employee of the Israeli security services from the Bedouin town of Rahat, was shot and killed by snipers while mending the fence between Gaza and Israel. The IDF’s response was quick in coming. A series of targets was bombed, and in one attack in the Al-Maghazi region in the central Gaza Strip a 4-year-old girl was killed. From this point onward it was just a small step to the same scenario that the people of southern Israel and the Gaza Strip know all too well by now. Qassam rockets are fired. The IDF launches an attack in retaliation, and Palestinian groups break the rules put in place in the wake of Operation Pillar of Defense.

And where is Hamas in all of this? Caught between a rock and a hard place.

They are ensnared in the exact same trap that characterizes the movement’s behavior whenever there is an escalation of violence between Israel and Gaza. When Hamas is attacked by Israel or perceived as being weak by the other groups — which challenge it whenever they can — it loses its aptitude, its motivation and its legitimacy among the Palestinian public, so that it cannot prevent those armed groups from causing the situation to deteriorate. Having little choice in the matter, it's led into a full frontal confrontation with Israel.

As a result, operational attacks on Hamas targets, or any other targets in Gaza for that matter (particularly when civilians are affected, as happened again this time) not only fail to serve as a deterrent, they have the exact opposite effect. They result in a backlash.

The last thing that the Hamas leadership wants is to be portrayed as collaborating with Israel or as a group motivated by fear from it, taking action against Palestinian groups solely to appease Israel. That is what happened in Operation Cast Lead (December 2008), it's what happened in Operation Pillar of Defense (November 2012) and it's what happened again this week. It took but an instant to fracture the unique mode of cooperation along the border that Israel and Hamas have cobbled together over the past few months. Ever since the understandings reached in the wake of Operation Pillar of Defense, and especially since the Muslim Brotherhood's fall in Egypt, Hamas has taken rigorous steps to prevent other groups from approaching the border fence and getting the movement entangled in yet another military adventure against Israel at the worst possible moment as far as it is concerned.

Hamas acted so insistently and effectively that it and Israel seemed to share a common interest, which could almost be called security collaboration. This was hinted to a month ago by the commander of the Gaza Division, Brig. Gen. Mickey Edelstein, when he said that Hamas had allowed IDF forces to conduct operations in Gaza, some 100 meters (328 feet) past the border fence. As long as everything was kept under wraps and no group in Gaza could claim that the movement had sold its soul to Satan, that is, Israel, there was no problem with that, and everybody was satisfied with how things were run.

But then there was the huge winter storm, which flooded entire neighborhoods in Gaza and forced hundreds of families to evacuate their homes. It was exacerbated by a perpetual infrastructure crisis, which permanently leaves hundreds of thousands of residents without electricity and running water and compounded by the blocking of the smuggling tunnels connecting the Gaza Strip with Egypt. Under these combined circumstances, many residents of Gaza came to see the Hamas leadership at its most wretched state yet. Thousands took to the streets to protest the intolerable humanitarian conditions, which peaked after seven years of crisis, ever since Hamas first gained hold of the reins of government. But when they wagged their accusatory finger, it was directed at Israel and not at Hamas. It may have been convenient for the movement’s leaders to absolve themselves of any responsibility for the crisis and place the blame firmly on Israel’s shoulders, but the chaos in Gaza as a result of the storm and the weakness of Hamas was exploited by the Popular Resistance Committees to their advantage, when they took credit for shooting and killing an Israeli citizen, Salah Abu Latif. From there to escalation, there was a short distance indeed.

The old, familiar rule that the other Palestinian groups benefit whenever Hamas is weak happened to be true this time as well. The Popular Resistance Committees, which already have a complex relationship with Hamas, as well as Islamic Jihad and smaller Salafi groups challenge Hamas, which they believe has abandoned the struggle because of the allure of power. The consequence is that Hamas is once again being dragged into a military confrontation, against its will and even more so against its most obvious interest at present: attempting to extricate itself from the isolation it has been caught up in over the past year.

Senior Israeli intelligence officials know from past experience that the pattern of attacking targets in Gaza does not necessarily embolden the movement’s leaders to issue orders to stop the recalcitrant snipers. Last week was no different. Aerial attacks in the Gaza Strip in response to the sniper fire not only failed to achieve their objective. They also failed to motivate Hamas to stop the shooters, something it had done rather vigorously until the escalation of violence. If anything, the attacks threatened to bring down any understandings that existed and reset the new rules of the game, achieved clandestinely through considerable hard work and with the utmost sensitivity. So where is the logic here? Why have Israel and Hamas acted yet again counter to their clear interests?

To understand Israel’s behavior, it is first necessary to add another important detail to the already convoluted equation that describes its relationship with Hamas — public opinion within the country. How will the leadership in Jerusalem be perceived if it fails to respond to an attack from Gaza, especially in a week in which there is a sense that the two sides are on the verge of yet another major round of violence? Won’t the leaders look impotent if they fail to order a large scale attack on Gaza, intended to showcase their determination and maintain the balance of fear?

It turns out that Israel and Hamas are caught in the same trap. They are both acting against all logic, just so that no one will say that they are motivated by weakness.