Iraq's Popular Mobilization Units are forcing factions out and closing their operations as part of the integration process into Iraq's official security forces. 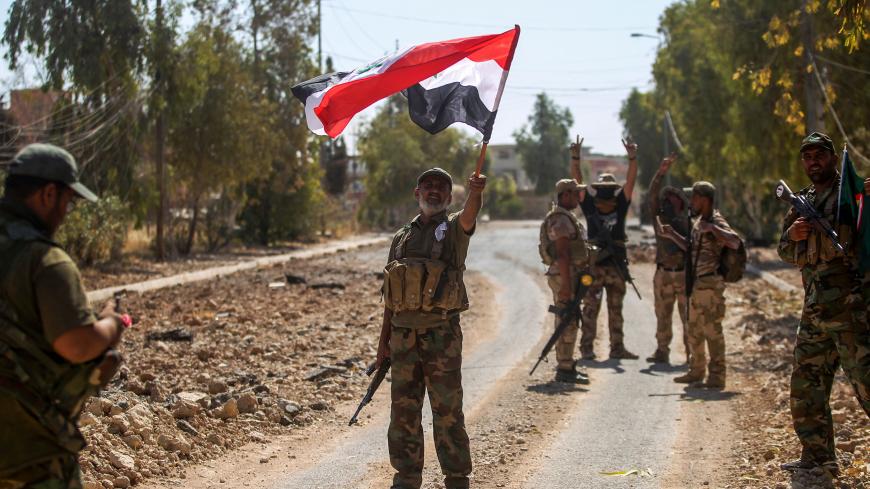 A fighter with the Popular Mobilization Units waves an Iraqi flag as others behind flash the victory sign, Tal Afar, Iraq, Aug. 26, 2017. - AHMAD AL-RUBAYE/AFP/Getty Images

BAGHDAD — In a fight for legitimacy, Iraq's Popular Mobilization Units are purging certain factions. The leader of Abu al-Fadhal al-Abbas Brigade, part of the PMU since its formation in 2014, was arrested Feb. 8. The forces that are holding him are unknown and he has not yet been transferred to the court system.

The timing of Sheikh Aws al-Khafaji's arrest raised speculation that it was linked to his recent claims that the killers of Iraqi novelist Alaa Mashzoub belong to a group aligned with Iran. “My cousin Alaa Mashzoub wrote an article against Iran and he was killed for that,” Khafaji had said.

Mashzoub, who belonged to the Khafaji tribe, had criticized Iran's influence in Iraqi political affairs and took part in the popular movement and last year’s demonstrations in Karbala province calling for reform and improved services. He was assassinated Feb. 2.

“We do not know when Khafaji will be released or his whereabouts.Some reports say he might soon appear in court,” Khafaji’s office manager Hussein al-Shammari told Al-Monitor.

“Al-Abbas Brigade is part of the PMU and made sacrifices to liberate the nation from the Islamic State. Arresting Khafaji and shutting down the brigade’s offices came as a big surprise. We were not notified of the decision to shutter our offices,” he added.

The Khafaji clan threatened to start a “revolution” and to resort to all “means and tactics” in the event Khafaji is not released, and demanded an investigation into Mashzoub's death.

Al-Abbas Brigade was not the only faction to face arrests and closures. The PMU said that it has closed down several “fake” offices in Baghdad. These included the headquarters of the Saraya al-Khorasani faction on Feb. 12; the group vowed to turn to the judiciary to prove the legitimacy of its offices.

Those who follow the PMU leaders’ statements saw these events coming, as many of them have expressed a desire to become a legitimate security institution. The Iraqi government is under international pressure to limit and control the PMU, while PMU leaders want to expand their presence and role.

PMU deputy head Abu Mahdi al-Mohandes said in a Jan. 15 interview with Nas News, “We will sacrifice a lot of friends when we cleanse our ranks and will face several obstacles. We have long way to go and we need to be patient." He said that organizing the different military factions and placing them under the control of the state is a difficult undertaking because some of the factions refuse to cooperate "and we will make many enemies in the process.”

Khafaji is not likely to be released anytime soon as unnamed other parties are making further charges against him, and he is likely to be brought to court. Should that come to pass, the Khafaji clan would likely seek revenge from the PMU and the other parties that pressed charges.

Khafaji was a leader of the Mahdi Army, the former military wing of the Sadrist movement. He established the Fayha al-Sadr Organization in Nasiriyah. In 2007, when Sadr dissolved the Mahi army, Khafaji held that his organization would not be affected.

Khafaji formed the Al-Abbas Brigade and moved it to Syria to fight when IS took over Mosul and large swaths of Iraq in 2014. The brigade fought in Fallujah, Anbar, Salahuddin, Baghdad and Mosul.

The number of the factions that fought IS is large, estimated in the tens of thousands of fighters, while a 2016 parliament decision officially legitimized only the PMU, whose identity and relationship to the rest of Iraq's security forces have yet to be legally defined.

Now, since the PMU leadership is part of the parliamentary Fatah Coalition, the organization's restructuring is expected to ramp up and there will be more arrests of leaders of factions that do not accept the full control of the state. 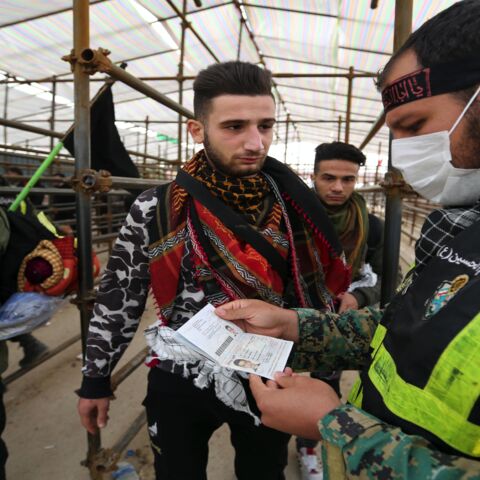