Banking giants in Iran have established a digital tokenization platform to liquidize bad assets. If it can overcome the many challenges on the way, it could generate vital cash — and public trust. 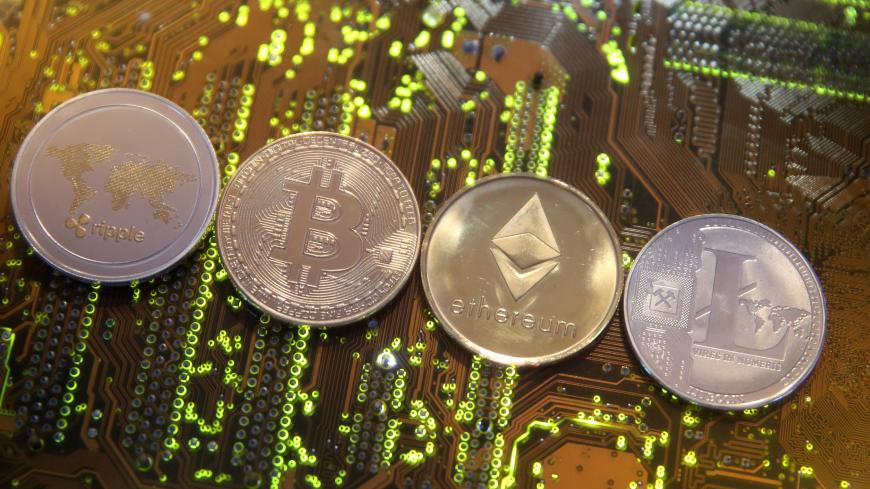 Representations of the Ripple, Bitcoin, Etherum and Litecoin cryptocurrencies are seen on a PC motherboard in this illustration picture, Feb. 13, 2018. - REUTERS/Dado Ruvic/Illustration

The biggest players in Iranian banking have joined forces in an effort to empower an ailing banking system that has long suffered from a slew of major issues — including a hefty credit crunch. There is no shortage of potential pitfalls and challenges, but the blockchain-enabled platform they have established — and its native gold-backed cryptocurrency — may prove a crucial source of cash and public trust in a not too distant future.

During the past year, the technology and payment system arms of four major Iranian banks — Parsian, Pasargad, Mellat and Melli —- in addition to Tosan, a leading provider of banking software solutions, have been developing Kuknos (“Phoenix”). Using distributed ledger technology, the blockchain platform’s ultimate goal is to make it possible for financial entities to issue digital tokens for a variety of assets and therefore increase financial inclusion. Its most immediate target, however, is to allow banks to tokenize and then liquidize their so-called “frozen” or non-productive assets.

Most Iranian banks are cash-strapped because they don’t have access to a significant portion of their assets. Those non-productive assets are largely the result of years of speculative activities, mostly in the lackluster property market. While there is no definitive account of the exact value of these assets, Minister of Economic Affairs and Finance Farhad Dejpasand recently estimated that it exceeds 1 quadrillion rials ($23.8 billion).

Kuknos, which was unveiled at a major banking conference in Tehran in late January, is an independent “fork” of the Stellar network, an open-source decentralized protocol for digital currency for fiat currency transfers. Its native currency is called PayMon (PMN), each unit of which is equal to and backed by 30 milligrams of 24-karat gold. Each PMN is now worth 156,581 rials ($3.72).

The platform is expected to officially start operating in the near future, likely before the end of the current Iranian year on March 20. Among other things, the project is awaiting finalization of the Central Bank of Iran’s draft regulatory framework on cryptocurrencies, which also deals with regulations for issuance of tokens.

According to the Kuknos white paper, 1 billion PMNs will be issued without backing when the platform is online. From that amount, 20% is reserved to be offered to “anchors” — who will need to meet technical and financial criteria, including but not limited to owning at least 300,000 PMNs. An initial coin offering (ICO) of 15% of total PMNs has been designated for the general public. In addition to a 5% portion dedicated to the founding team, the remaining 60% of the coins are to be offered to the network monthly, based on performance and demand.

The ICO for anchors is set to be held as soon as the network is operational. After the anchors are identified and their gold is secured, the public ICO will follow (which at the moment has been scheduled to start May 22 and end three months later). The votes of at least 70% of the founding team members will determine the timing of their ICO, while the monthly distributions will begin from Aug. 23, the project’s white paper says. Al-Monitor unsuccessfully sought further comment from top-level Kuknos executives.

Kuknos plans to offer a variety of facilities. Just like Stellar, it would have a decentralized exchange that swaps cryptocurrencies and fiat currencies. More importantly, it could significantly ease the know-your-customer process by issuing an identity token for users after they are verified by a founding member of the network; the user wouldn’t have to go through any more paperwork. This, coupled with the transparency intrinsic to blockchain technology, also could considerably boost anti-money-laundering processes. As planned, the platform also would reduce transaction times and costs. Finally, banks would have a new fee-based revenue stream, something they painfully lack due to the fact that most banking services in Iran are offered free of charge.

But first and foremost, Kuknos would allow validated entities to offer tokens on what is termed an agile and immutable blockchain network, which could then be traded by all members of the platform. If the platform finds a foothold, it could inject much-needed money into the banking system through absorbing micro capital from a general public that would otherwise be encouraged to invest their money elsewhere to hedge against a weak rial, potentially impacting markets adversely.

While FAM, a company founded by the government in 2009 to sell banks’ excess assets, has succeeded in selling a portion of the non-productive assets, the value of the sold assets is dwarfed by the total value of all excess assets. Kuknos has the potential to change that. For example, only a handful of people — if any — would be willing and able to purchase a major property from a bank. But now, many more would have the ability to digitally buy a percentage of that property and then trade it. Indeed, all tokens are to be offered in the over-the-counter Iran Fara Bourse capital exchange.

But Kuknos will have to overcome significant challenges. Chief among them is lackluster trust toward the banking system, both due to broken commitments by the banks in the past and the damage done by troubled financial institutions. This is compounded by the fact that adoption of blockchain and cryptocurrency technology will not come easily for the general public. Finally, the project may be subject to meddling by powerful officials or factions of the political establishment.

To account for these concerns, Kuknos is relying on the transparency offered by blockchain technology, and is planning to hold introductory and educational courses, first for potential future anchors and then for the general public — although none have been organized yet. It also signed an agreement with the scientific and technology department of the presidential office Feb. 5 to symbolically secure government support and establish a “distributed ledger-based acceleration and innovation center for the money and capital markets.”

But ultimately, Kuknos executives will have to deal with the fact that perception of their project both inside and outside Iran has been mostly negative, and at times completely opposite of what they have said the project is about.

On the one hand, the project has received pessimistic feedback on social media from local members of the blockchain and cryptocurrency community. On the other hand, due to US sanctions and the launch of a sovereign crypto-rial, most foreign media outlets are presenting Kuknos as a sanctions-busting endeavor, which undermines its goal of instead assisting the local banking system. However, due to its adoption of the Stellar architecture, it should be noted that Kuknos could theoretically link up with foreign partners and attract foreign investment in the future, absent a “maximum pressure” on the part of the United States.