Iran is accelerating work on its blockchain-enabled projects, which could potentially include a multilateral replacement for SWIFT, in light of the reimposed US sanctions. 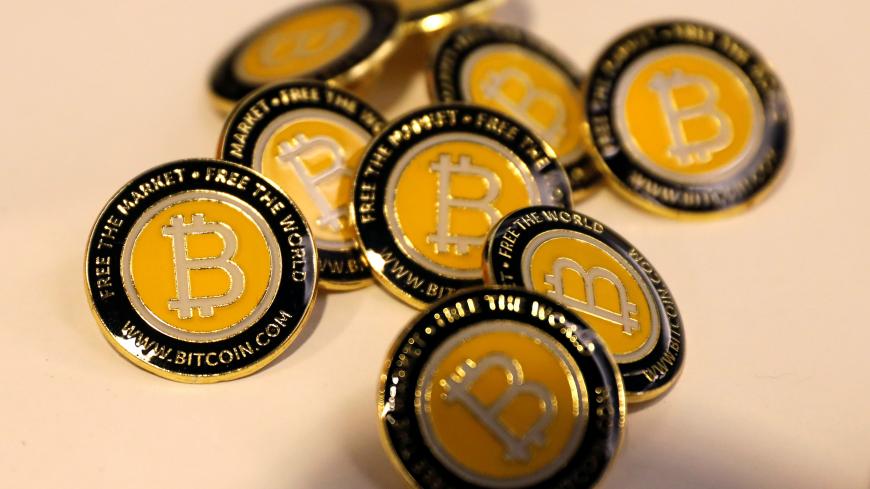 Bitcoin buttons are seen displayed on the floor of the Consensus 2018 blockchain technology conference in New York City, May 16, 2018. - REUTERS/Mike Segar

Blockchain technologies, especially cryptocurrencies, have become a hot topic in Iran during the past few years, just as in most other countries. Few tangible results have materialized so far, but US officials may have actually done Iran a favor as they have significantly accelerated development of blockchain-based projects. The unilateral reimposition of US sanctions and a local drive for transparency have prompted Iranian authorities to increasingly turn to blockchain and everything it enables.

At least two state-backed virtual currencies are in the works, one spearheaded by the Central Bank of Iran (CBI) and the other by the Information and Communications Technology Ministry. Authorities have signaled they will at least partially embrace cryptocurrencies. The head of the High Council of Cyberspace, Abolhassan Firouzabadi, said Nov. 4 that Iran’s government has accepted cryptocurrency mining as an industry. The CBI is expected to divulge its regulatory stance on cryptocurrencies in the coming months and recognize the decentralized phenomena; while it is unclear what degree of recognition will take place, the expected move signals an about-face from the blanket ban on handling cryptocurrencies for financial institutions issued in April.

The latest example of Iran striving to expand its blockchain development efforts came Nov. 14, when a trilateral agreement of cooperation was signed with Russia and Armenia during the ChainPoint 18 conference in Yerevan, Armenia. It was signed between the CBI-affiliated Iran Blockchain Labs, the Russian Association of Cryptoindustry and Blockchain and the Armenian Blockchain Association. The agreement deals with transferring knowledge and experience, holding mutual consultations, participating in joint work groups and raising awareness about blockchain technologies.

Al-Monitor unsuccessfully sought comment on the agreement from Iran Blockchain Labs. However, Armenian Blockchain Association President Vigen Arushanyan said the accord “is about sharing the expertise and experience between professionals from the participating countries,” adding, “All of the three countries have strong and prominent academia, and technical and technological human resources, so it is natural to combine efforts for the sake of the development of emerging technologies.”

The president of the Russian Association of Cryptoindustry and Blockchain, Yuri Pripachkin, said his group is comprised of players and companies representing various aspects of the Russian crypto industry: miners, traders, developers of blockchain technologies, lawyers and information and security specialists. He said the command that Russian developers and experts have about the subject is seen as quite high by those outside the country, "so the interest of Iranian colleagues in the experience of domestic Russian] specialists is understandable.” Pripachkin told Al-Monitor, “We are waiting for Iranian colleagues to exchange the experiences, contacts and knowledge that they have accumulated during their work.”

Practical applications of the distributed ledger technology offered by blockchain are immensely diverse and promise radical transparency. Iranian authorities have also started tapping into some of its various applications as it was announced in early August that the National Library and Archives of Iran will become accessible on blockchain. However, especially in light of reimposed US sanctions, Iran is now mostly focused on blockchain-enabled solutions in the financial sector.

In remarks reported by Russia’s RBK following finalization of the trilateral blockchain agreement, Pripachkin said it could prove especially useful to Iran, where the situation is more complicated in terms of sanctions. “According to our information, an active development of an Iranian version of SWIFT is currently under way,” he said, adding that cryptoeconomic tools can be effectively utilized to bypass sanctions restrictions.

On Nov. 5, the day the second tranche of US sanctions targeting Iran’s banking and oil industries among others came into effect, CBI Governor Abdolnasser Hemmati said the central bank had actively planned for various sanctions scenarios. He also confirmed that the CBI has already commenced work on a replacement for Society for the Worldwide Interbank Financial Telecommunication (SWIFT). Shortly after, the Belgium-based global financial messaging service caved in to US pressure and disconnected the CBI and several other Iranian banks. On Nov. 18, the semi-official Fars News Agency quoted an unnamed banking official who also confirmed work on a replacement for SWIFT, and said all Iranian banks and a number of foreign banks have already connected to it without mentioning any names. More recently, Russian President Vladimir Putin said Nov. 28 that Russia is “actively working” with partners to create financial systems that are independent of SWIFT.

“Blockchain’s distributed ledger technology can provide the required technical grounds that will have beneficiary countries, perhaps the Commonwealth of Independent States [CIS] nations, as members,” he told Al-Monitor.

The blockchain-enabled financial system could be pegged to gold, or a more sustainable backer that could be a basket of Iranian and CIS member states’ currencies. This way, “If Iran’s rial continues to slide, for example, the impact on the overall currency will be limited,” he said. For Tehrani, the more problematic aspect will be working out the commercial and legal challenges. The cryptocurrency expert said a multilateral blockchain-enabled financial messaging system would be nothing but a “pipe dream” absent committed negotiations to work out the details.

The text of the trilateral blockchain agreement does not mention any specific applications, including a financial messaging service. Pripachkin said Iran and Russia could potentially use cryptocurrency instruments to facilitate international payments. “However, at the moment this is impossible due to the lack of legal status of cryptocurrency in the Russian legislation,” he said, adding that his association is involved in an ongoing lawmaking process concerning cryptocurrencies in the Russian parliament.

Pripachkin said the Russian association's experts think Iran should for now primarily focus on creating a domestic market through employing cryptocurrencies that will be aimed at bettering the daily lives of citizens and boosting transparency. “And if investors, including foreign ones, see that this market actively operates and develops, then the next stage will be access to the international level,” he said.

For Arushanyan, even if the countries use virtual currencies in the future and commercial banks clear the transactions, “They will probably face some pressure from their international counterparts’ side.”

Fully aware of the potential ramifications of virtual currencies for its sovereignty, the United States has so far proved very vigilant in trying to monitor and curb crypto use by Iran. In a detailed advisory published Oct. 11, the US Financial Crimes Enforcement Network dedicated a lengthy chapter to Iran’s use of virtual currencies. The US Department of Treasury recently designated two Iranians for allegedly using bitcoin to facilitate “malign activities” and payments. Perhaps more noteworthy, it was the first time that US sanctions targeted digital currency addresses.