A new US intelligence assessment suggests that the Donald Trump administration’s Iran policy is not achieving its goals and may in fact be counterproductive. 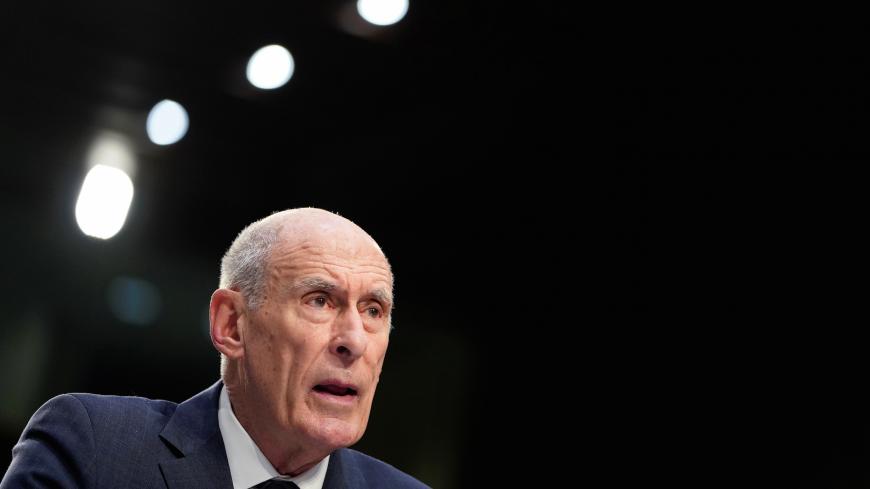 WASHINGTON — Top US intelligence officials, in a new "Worldwide Threat Assessment" to Congress, offered several judgments on Iran that seem to cast doubt on the effectiveness of the Donald Trump administration’s Iran policy.

Iranian hard-liners could be empowered, sporadic unrest is uncoordinated, and Iran’s regional behavior has not moderated and may even become more aggressive in the face of perceived increased US/Saudi/Israeli hostility and US-led economic pressure, the 42-page annual "Worldwide Threat Assessment," prepared by the Office of the Director of National Intelligence, said.

Iran continues for now to abide by the 2015 Iran nuclear deal, the Joint Comprehensive Plan of Action (JCPOA), that Trump withdrew from last year, Director of National Intelligence Daniel Coats told the Senate Intelligence panel today. But Iran is having internal debates if it should resume elements of its program if it does not receive the economic benefits world powers agreed to in exchange for its rollback of its nuclear program, US intelligence officials warned.

"We continue to assess that Iran is not currently undertaking the key nuclear weapons-development activities we judge necessary to produce a nuclear device,” Coats told the Senate Intelligence panel at a briefing today.

"However, Iranian officials have publicly threatened to reverse some of Iran’s JCPOA commitments — and resume nuclear activities that the JCPOA limits — if Iran does not gain the tangible trade and investment benefits it expected from the deal,” Coats said. “Iran’s continued implementation of the JCPOA has extended the amount of time Iran would need to produce enough fissile material for a nuclear weapon from a few months to about one year."

Iran currently continues to comply with the JCPOA, but is internally debating if it should continue should it not get the economic benefits, said CIA Director Gina Haspel.

"I think the most recent information is the Iranians are considering taking steps that would lessen their adherence to JCPOA as they seek to pressure the Europeans to come through with the investment and trade benefits that Iran hoped to gain from the deal," Haspel told the Senate Intelligence panel.

"They are making some preparations that would increase their ability to take a step back if they make that decision," she said. “But we do see them debating amongst themselves as they failed to realize the economic benefits that they hoped for from the deal."

Trump’s withdrawal from the nuclear deal last year and reimposition of harsh sanctions on Iran’s energy and banking sectors has not caused Iran to moderate its support for proxy groups in the region, or curtail its ballistic missile program, the largest in the Middle East, according to the new US assessment. Nor has it produced the kind of seismic unrest that would potentially threaten the regime’s survival and force it back to the negotiating table, the US intelligence community assesses.

“Iran’s regional ambitions and improved military capabilities almost certainly will threaten US interests in the coming year, driven by Tehran’s perception of increasing US, Saudi, and Israeli hostility, as well as continuing border insecurity, and the influence of hardliners,” the annual intelligence assessment said.

“Regime hardliners will be more emboldened to challenge rival centrists by undermining their domestic reform efforts and pushing a more confrontational posture toward the United States and its allies,” it assessed.

While unrest mostly driven by economic grievances is expected to continue, “the protests are likely to remain uncoordinated and lacking central leadership or broad support from major ethnic and political groups,” the US intelligence document said, adding the regime is well prepared to handle renewed protests.

As Al-Monitor previously reported, the Trump administration conducted a preliminary internal assessment of its Iran policy earlier this month and determined that it is not working, according to a recent International Crisis Group report. The Iran judgments in the unclassified new threat assessment seem to closely reflect those made in the purported interagency preliminary internal assessment. Namely, that Iran is not moderating its regional behavior or missile program, or coming back to the negotiating table under the Trump administration maximum pressure campaign.

The US intelligence assessment comes as State Department officials seemed to be moderating their vision for a conference next month in Poland amid concern from European allies that it would be an anti-Iran powwow.

Senior US and Polish officials, speaking to journalists from Brussels Monday, said the agenda for the Feb. 13-14 ministerial conference on peace and stability in the Middle East would be broad and not focused on Iran.

“The agenda has always been very broad to cover some of the most pressing issues in the region,” a senior US administration official, speaking not for attribution, said on the call. “We are going to discuss Iran because it’s not possible to have any conversation about the Middle East without having some reference to Iran. But that doesn’t make it an Iran ministerial, and it never has.”

The Polish co-hosts were even more robust in insisting it would not be a conference about Iran.

“Nothing in the title of the conference or in the agenda indicates that this is a conference on Iran,” a Polish senior official, speaking not for attribution on the call, said, adding that Poland, as a member of the European Union, supports preserving the Iran nuclear deal. “We support the JCPOA.”

The tension between the United States and Europeans over Trump’s exit from the Iran nuclear deal is just one issue that has contributed to one of the starker findings cited in the forward of the new US assessment: As Russia and Chinese cooperation deepens, some US allies are increasingly unsure they can count on the United States.

“Some US allies and partners are seeking greater independence from Washington in response to their perceptions of changing US policies on security and trade and are becoming more open to new bilateral and multilateral partnerships,” the threat assessment said.