US allies try to dilute anti-Iran agenda for Warsaw summit

Wary European allies are trying to dilute and broaden the agenda and lower their diplomatic representation for a US-backed ministerial meeting on Middle East peace and security to be held Feb. 13-14 in Warsaw, Poland. 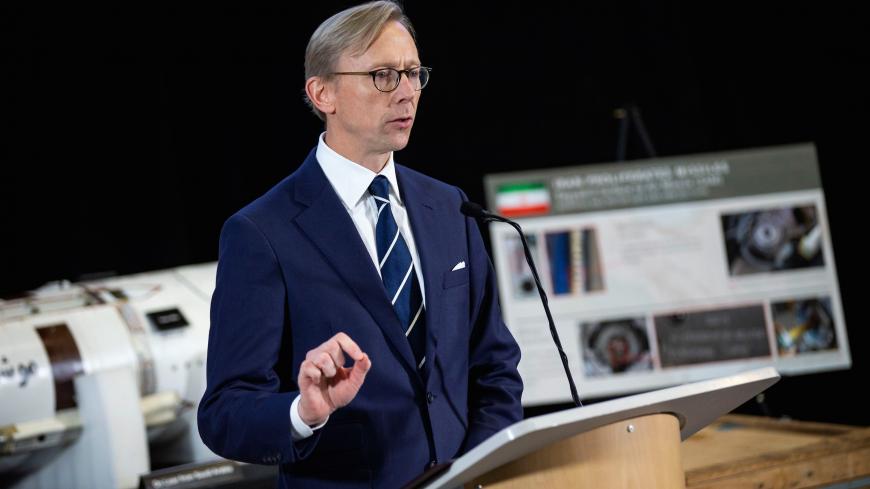 Brian Hook, the US special representative for Iran, speaks about potential threats posed by the Iranian regime to the international community during a news conference at a military base in Washington, Nov. 29, 2018. - REUTERS/Al Drago

WASHINGTON — An international conference in Poland next month that the Donald Trump administration had intended to showcase global unity and resolve to isolate Iran is instead highlighting wariness among US allies.

European allies are scrambling for excuses to send lower-level diplomats instead of their foreign ministers to the Feb. 13-14 Warsaw conference and also are looking for ways to dilute the agenda while not outright snubbing the United States, European sources said.

Meanwhile, the US envoy to the UN insisted this week that the Ministerial to Promote Peace and Stability in the Middle East was not intended to be a forum to demonize Iran.

“The ministerial will serve as a global brainstorming session where we can develop the outline of a stronger security architecture in the region,” the acting US Ambassador to the UN Jonathan Cohen told the UN Security Council on Tuesday.

“It is not a forum to re-litigate the merits of the JCPOA,” Cohen continued, using the acronym for the formal name of the 2015 Iran nuclear deal, the Joint Comprehensive Plan of Action. “While we’ve made our concerns with the JCPOA clear, we respect other states’ decisions to support it. It is also not a venue to demonize or attack Iran.”

But if US envoys were at pains to stress that the Warsaw meeting is not intended to be a forum to bash Iran, European diplomats are unconvinced. Among the reasons for their skepticism is that the meeting is being planned on the US side by Brian Hook, Trump’s special envoy on Iran and head of the Iran action group.

“It is really about Iran for the US,” one European diplomat, speaking not for attribution, told Al-Monitor. “They don’t even mention Poland when they discuss it with us.”

The State Department is expected to brief invited countries on Thursday on the agenda for the ministerial, diplomats told Al-Monitor.

British Foreign Secretary Jeremy Hunt is also expected to discuss it, along with “Yemen, Iran, Syria, cyber security and the future of the UK-US relationship,” when he travels to Washington on Thursday for meetings with US Secretary of State Mike Pompeo and Vice President Mike Pence. To date, Britain had not decided yet whether to send its foreign secretary or other representative to the Warsaw meeting.

The State Department said that the agenda for the Warsaw meeting was still being finalized, and that the United States has been in ongoing consultations with other countries about their thoughts on it.

“The agenda is still being finalized but will address a variety of Middle East issues,” a US official told Al-Monitor, adding, “There will be more information regarding the ministerial in the coming days.”

The United States hopes that all the invited countries send high-level representation, the official said.

Beyond the usual tensions between the Trump administration and Europe over Trump’s decision to withdraw from the Iran nuclear deal and reimpose sanctions, the Warsaw meeting is very poorly timed, as far as Europe is concerned, said Ellie Geranmayeh, deputy head of Middle East programs at the European Council on Foreign Relations.

“They don’t want to completely snub the US on the Poland summit, but find the timing very unhelpful,” Geranmayeh told Al-Monitor in an interview. “Because the priority for the moment on the European side is to consolidate the JCPOA.”

“Basically for the E3 [Britain, France, and Germany] countries in particular, this has come at a really bad and frustrating time for them,” Geranmayeh said. “Because on the one hand they are trying to demonstrate sincerity to Iran … about their commitment to the nuclear deal. And they are aware that Iran is frustrated by how slow the progress has been on that front.”

“At the same time, they have to consider their special relationship with the United States in the broader context of the trans-Atlantic relationship,” she said. “And they are all keen to signal to Iran that they want to have a much more frank and meaningful diplomatic process on things that they disagree on, like Syria, Yemen and the missile issue.”

“Everyone is scrambling trying to find an excuse not to send their foreign minister,” Geranmayeh added, citing excuses European nations have considered offering Washington for sending lower-ranking diplomats instead, such as Brexit and new parliamentary coalitions being created. “I also heard some countries are planning to send lower-ranking civil servants, not even political directors.”

With talk of Washington circulating “agendas with different task forces” for the conference, “that is something quite worrying to the Europeans,” Geranmayeh said. “They don’t want task forces focused on Iranian missiles, Iranian behavior in Syria, etc. So what the Europeans pushed for is, if this is really about stability in the Middle East, let’s have clear guidelines, [and sessions on] Yemen, Syria, humanitarian access. And in that sense, not send our foreign ministers or Iran desk, but our reps for Syria, Yemen, Israel-Palestine.”

“The Europeans are trying to limit the damage that could be done by diluting the Iran element and broadening the agenda,” Geranmayeh said.

In another sign of European preoccupation with trying to preserve the Iran nuclear deal, France said Wednesday that a European mechanism to facilitate non-dollar trade with Iran permitted under the nuclear deal would be ready imminently.

by Murielle KASPRZAK and Joseph SCHMID | AFP | May 26, 2022
END_OF_DOCUMENT_TOKEN_TO_BE_REPLACED