As Iran gives final approval to move forward with implementing the Iran nuclear deal, it is holding back for now on expanding contacts with the United States to discuss regional crises, wary of US influence and seeking to preserve internal balance. 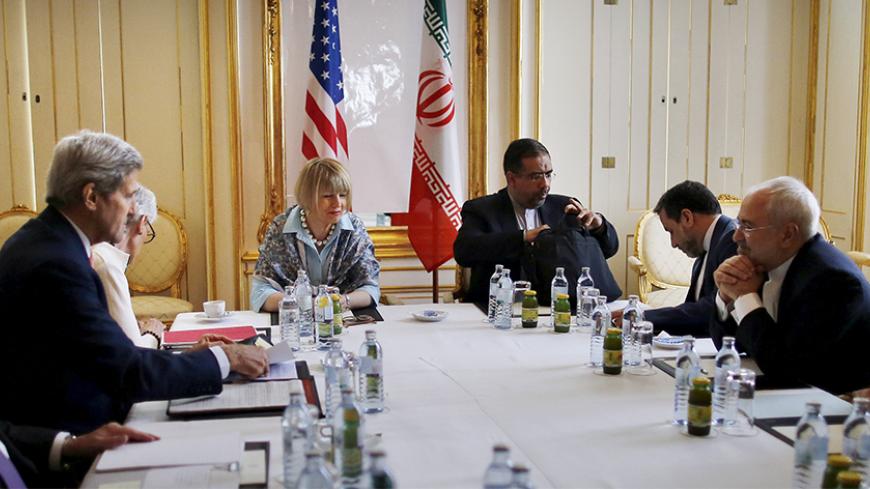 But even as Iran shows determination to move forward with implementing the nuclear deal, its leadership is also showing signs of wariness about moving to expand contacts with the United States, ruling out bilateral talks with the Americans on regional issues for now, even as it reaches out to Europe on Syria and has accepted European offers to mediate and try to facilitate a dialogue between Iran and the Sunni Gulf states, as yet rebuffed by Saudi Arabia.

Following the formal “adoption day” of the landmark Iran nuclear deal on Oct. 18, diplomats from Iran, the five permanent members of the UN Security Council plus Germany and the European Union will convene the first official meeting in Vienna of the eight-member Joint Commission they comprise, to oversee implementation of the deal, US and Iranian officials said. Iran expects that it will have completed all of the steps it has agreed to take to get sanctions waived or lifted — including reducing the number of centrifuges it is using to enrich uranium to 5,000, reducing its stockpile of lower enriched uranium by 98% to 300 kilograms and removing the core of its uncompleted Arak plutonium reactor — by the end of the year, Ali Akbar Salehi, the head of the Atomic Energy Organization of Iran, told Iranian journalists Oct. 15. Meanwhile, the International Atomic Energy Agency confirmed Oct. 15 that Iran had complied with answering the questions and providing the access it needed to issue a report on the suspected past military dimensions of Iran’s nuclear program by Dec. 15.

Iranian Deputy Foreign Minister for Arab and African Affairs Hossein Amir-Abdollahian made a rare trip to Brussels Oct. 13 to hold consultations with top EU foreign policy officials about Syria. EU Deputy Secretary-General Helga Schmid will travel to Iran this weekend to hold follow-up talks on Syria and implementation of the nuclear deal, she said. In the meantime, German Foreign Minister Frank-Walter Steinmeier is also due to travel to Iran Oct. 16, and will then travel on to Saudi Arabia and Jordan Oct. 18-19, saying he is seeking to help mediate to get Saudi-Iran dialogue going to try to facilitate an end to the Syrian conflict sending tens of thousands of refugees into Europe.

“We must strive to help build bridges between Iran and Saudi Arabia so that it becomes conceivable that in the end we can get all the regional partners we need at one table," Steinmeier said Oct. 13.

Iran Foreign Minister Mohammad Javad Zarif, speaking in New York Oct. 5, expressed frustration that Saudi Arabia until now has not been willing to discuss regional issues like Syria, Yemen and the Islamic State with Iran.

In the Iran nuclear deal negotiations, “What was important, what made the difference … what made this work was we were able to define the problem in a non-zero-sum way, so that our gain was not a loss for the United States” and vice versa, Zarif said in a conversation with his alma mater, the University of Denver Korbel School of International Affairs in New York Oct. 5. “When we were able to do that, we were able to move forward.

“The same applies to Syria, Yemen, Iraq. … Unless we change the paradigm, we are not able to resolve our problems,” Zarif said. “Unfortunately, our Saudi neighbors are not prepared to discuss these issues with us.”

The flurry of Iranian diplomacy with the Europeans and Russians on Syria is at odds with Iran’s more circumscribed contacts with the United States in New York last month. Iran’s Supreme Leader Ayatollah Ali Khamenei this month ruled out bilateral US-Iran negotiations on issues beyond the Iran nuclear deal, warning against US influence threatening Iran’s cultural identity and independence. That admonition was reflected in Iran officials’ more reticent posture in New York in September and October, where Iranian officials indicated the United States may be trying to talk with them about Syria, but Iran was not negotiating with them about it. While Iran would not at this point hold bilateral negotiations with the United States on regional issues, it did not rule out participating in multilateral discussions that would include the United States, such as a Syria contact group, said Iranian officials speaking not for attribution.

As Iran has moved in most every official body to approve going forward with the nuclear deal, it has simultaneously made a defiant show of strength on other fronts, many at odds with the positions of its Western and would-be Gulf interlocutors. On Oct. 14, the Iran Revolutionary Guard Corps took photographers for an unprecedented view of its missile strength buried in underground bunkers, conducted a controversial ballistic missile launch Oct. 11 that the United States and France say may violate UN Security Council resolutions and is reportedly ramping up for an anticipated major military operation in Syria in support of President Bashar al-Assad's forces near Aleppo. Iran also this week reportedly convicted Washington Post reporter Jason Rezaian in a secret espionage trial his family and editors say is a sham, after detaining him in Evin prison for over 14 months, and has not moved yet to release two other Americans being detained in Iran, former Marine Amir Hekmati and pastor Saeed Abedini, more than two months after reaching the nuclear deal. All this as Iranian President Hassan Rouhani is seeking to make Iran friendly to foreign investment to improve Iran’s economy ahead of parliamentary and Assembly of Experts elections early next year.

Khamenei is blocking Rouhani on multiple fronts to try to maintain internal consensus after the nuclear deal, said Iran analyst Ali Vaez. Khamenei “wants to ensure that the balance of power is not affected by the deal,” Vaez, a senior Iran analyst at the International Crisis Group, told Al-Monitor. Meantime, Iranian Foreign Ministry diplomats “still have not found the focus and opening that they need to influence regional policies.”

While Khamenei during the final round of nuclear deal consultations in June said the deal could be a test to see if Iran might continue working with the Americans on other issues, “After, he did a 180, … saying, ‘We can’t work with the Americans ever,’” Arianne Tabatabai, an Iran expert at Georgetown University, told Al-Monitor Oct. 14. “It is him posturing, … knowing he has all these constituencies he has to appeal to. … The whole fight in Iran on [the Joint Comprehensive Plan of Action] has been pretty ugly; it has made the US Congress look good.”

So Iran’s diplomacy-minded officials “have to be really careful what they do and say,” Tabatabai continued. “If anything is going to happen [by way of conversations with the Americans on regional issues], it is going to happen very hush-hush.”

The traction for Iran-EU diplomatic outreach on regional issues is partly the result of Europe’s concerted initiative and also concern that the United States may try to cut it out of a future Syria contact group, said Ellie Geranmayeh, an Iran expert at the European Council for Foreign Relations.

“Part of the diplomatic track between Iran and Europe is caused by the fact the Europeans themselves, the E3 [Britain, France and Germany] particularly, and [EU foreign policy chief Federica] Mogherini are more forward-leaning to Iran on regional issues,” Geranmayeh told Al-Monitor Oct. 14. “The Europeans, on their part in the last two weeks, know their niche. They are able to talk to the Iranians in a more direct fashion. Some fear that the E3 would be cut out by the Americans, after the nuclear deal, of the negotiations on Syria. The Europeans … [feel] we are the ones taking most of the cost, and we have to be involved. They don’t want to be cut out of the process.”

The Europeans, by deepening contacts with Iran on Syria and working to facilitate Saudi-Iran dialogue, are making a case for why they need to be involved in any Syria contact group, given the refugee flows into Europe, the security concern about foreign fighters returning to Europe and diplomatic relevance, said Geranmayeh.

US sets up implementation team amid personnel transition

The US government is also thinking through how to organize itself to ensure solid implementation of the Iran nuclear deal, while leaving open the possibility for potential conversations with Iran on other regional issues should the opportunity arise, during its own personnel and elections transitions. The lead US nuclear negotiator, Undersecretary of State for Political Affairs Wendy Sherman, retired earlier this month, after the retirement last year of Deputy Secretary of State Bill Burns, who led secret US bilateral talks with Iran that advanced the interim nuclear deal.

Solid implementation of the nuclear deal over the next year will be especially critical to ensuring the next US president who comes into office in 2017 decides, despite the Republican campaign rhetoric, to follow through with it, Burns stressed in an interview with Al-Monitor in July.

The United States and Iran “have got to establish a solid track record of implementation,” Burns, now president of the Carnegie Endowment for International Peace, told Al-Monitor July 24. “There is no substitute. Unless that is going OK,” it will reduce the space to potentially talk with the Iranians on other issues.

The US government has set up an office to coordinate implementation of the Iran nuclear deal under diplomat Stephen Mull, a former US ambassador to Poland and special assistant to Burns.

But after two years of negotiations at which large US and Iranian delegations were meeting almost every month at a high level, often at the ministerial level, it seems that the tempo, seniority and range of diplomatic contacts between the United States and Iran in the implementation phase could be reduced for now to what is anticipated to be quarterly meetings of the Joint Commission.

Beyond whatever communications continue between Zarif and Secretary of State John Kerry, it is not clear who may take the lead for the United States in pursuing potential opportunities for further discussions with Iran beyond JCPOA implementation, potentially Deputy Secretary of State Tony Blinken or Sherman’s nominated successor Tom Shannon, who currently serves as Kerry’s counselor and has long diplomatic experience working on Latin America.

It could be that with Iran behaving cautiously to reduce diplomatic outreach in the wake of the Iran nuclear deal and in advance of Iran's parliamentary elections next spring, and the US presidential campaign moving into full swing next year, Iran’s leadership may decide to wait out further diplomatic opportunities with Washington for now, to see who the next US president is and what his or her attitude and policies on Iran may be.