US to name coordinator for implementing Iran nuclear deal

With the Iran nuclear deal expected to survive congressional review, the Obama administration is preparing to pivot from defending the deal to the crucial task of implementing it, with diplomat Stephen Mull leading the new office to coordinate JCPOA implementation for the US government. 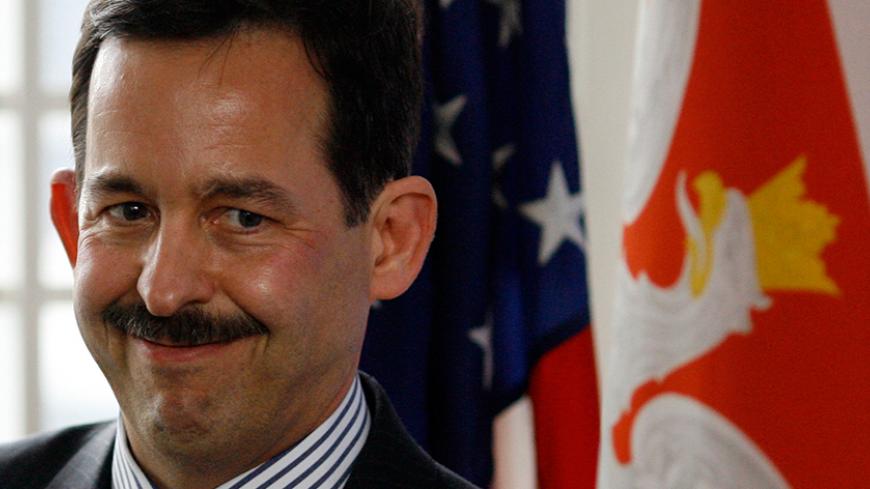 Stephen Mull smiles during a news conference at the US Embassy in Warsaw, May 7, 2008, when he was acting assistant secretary for political-military affairs at the US Department of State. He later became ambassador to Poland. - REUTERS/Kacper Pempel

With the Iran nuclear deal expected to emerge intact this week from a grueling 60-day congressional review, the Barack Obama administration is preparing to unveil a new office for coordinating its implementation, to be led by outgoing US Ambassador to Poland Stephen Mull.

The announcement of Mull’s appointment as US coordinator for the Iran nuclear deal implementation is expected to be made by Secretary of State John Kerry as early as Sept. 17 — the deadline for Congress to have sent a resolution of disapproval to the president, a move that was blocked by Senate Democrats — or shortly thereafter, US officials said. It is expected to come as the White House also announces the nomination of State Department Counselor Tom Shannon to succeed Wendy Sherman as undersecretary of state for political affairs, as Al-Monitor previously reported.

A veteran foreign service officer, Mull previously served as executive secretary of the State Department (2010-12), ambassador to Lithuania and, most critically, as senior adviser to then-Undersecretary of State William Burns (2008-10) when Burns was the lead US Iran nuclear negotiator and the United States was helping negotiate UN Security Council Resolution 1929 that sanctioned Iran over its nuclear program, among previous relevant assignments. (Mull was described by one former State Department colleague as “Burns’ right arm.”)

Mull, contacted by Al-Monitor, declined to comment on his anticipated new appointment before it is officially announced. His successor as US envoy to Poland, Paul Jones, was sworn in by Kerry at the State Department on Sept. 11.

Mull “is a brilliant choice,” Richard Nephew, former top State Department Iran sanctions official, told Al-Monitor, noting Mull’s experience on the Iran file under Burns from 2009-10 and wide-ranging work with agencies across the government. He may want to bring on as his deputy coordinator somebody who has invested a decade-plus specifically on the Iran file to complement his experience, Nephew said.

Beyond the near-term ribbon-cutting, the office may get off to a somewhat slow start, as Mull gathers his team, meets with all the senior people throughout the government and foreign interlocutors, and brings himself up to speed on every detail of the past two years of negotiations and the 159-page Joint Comprehensive Plan of Action, former US officials suggested.

The team will be “lean … not more than seven” people, and Mull “will have reach” across the entire interagency to convene what he needs, said a US official, speaking not for attribution to discuss the still-fluid plans for the office.

The small team working under Mull will be “coordinating this very large interagency group of people, hundreds of people,” across multiple agencies, including the State and Treasury departments and the labs employing Department of Energy nuclear experts, to ensure that both Iran lives up to its commitments under the JCPOA, and the United States lives up to its commitments, a second US official said, stressing that “the function of the team is a coordinating function.”

On the nuclear and sanctions issues, Mull brings a variety of expertise to the table, including his experience serving as Burns’ senior adviser from 2008 to 2010 when the United States was helping negotiate the critical UN Security Council Resolution 1929, and as executive secretary of the State Department, in which he coordinated lots of people to serve then-Secretary of State Hillary Clinton, now Democratic presidential candidate.

The coordinating team will be structured with Mull in charge; he will have an assistant coordinator and a handful of deputies responsible for different functions, including congressional reporting, verifying the nuclear piece, sanctions and sanctions relief.

The other members of the P5+1 — the permanent five members of the UN Security Council plus Germany — are also in the process of organizing themselves to implement the JCPOA. The JCPOA mandated that a Joint Commission — comprised of each member of the P5+1, plus the European Union and Iran — be established to meet regularly to coordinate implementation of the landmark Iran nuclear deal and work out any disputes that may arise.

France is likely to be represented on the Joint Commission by its political director and chief Iran nuclear negotiator Nicolas de Riviere, a French official told Al-Monitor.

Who will lead the European Union team on the Joint Commission “is still a work in progress,” an EU official told Al-Monitor on Sept. 15. An Iran task force has been established at the European External Action Service, led by Portuguese diplomat Hugo Sobral. Also mentioned as a possibility is Stephan Klement, the longtime top nonproliferation adviser to European Union Deputy Secretary-General Helga Schmid, who played the central role in over two years of Iran nuclear deal negotiations and the drafting of the final deal, reached July 14 in Vienna.

Iranian officials told Al-Monitor they were still figuring out their representation on the Joint Commission, and they understood the same to be true of some of the other P5+1 governments.

“At this moment, all these questions are under consideration in Iran and even, I assume, by other P5+1 countries, and no definite position has yet been made on them,” a member of the Iranian negotiating team, speaking not for attribution, told Al-Monitor on Sept.16.

The first meeting of the Joint Commission is likely to happen in New York at the political director level. “It’s supposed to be held on the sidelines of the UNGA in New York,” a senior Iranian official, speaking not for attribution, told Al-Monitor on Sept. 15. He added that the date is not finalized yet.

“Adoption day” of the JCPOA is Oct. 18 — 90 days after the UN Security Council unanimously passed a resolution endorsing the deal, US Energy Secretary Ernest Moniz told journalists at a press conference in Vienna on Sept. 14 on the sidelines of an International Atomic Energy Agency general conference.

Barring surprises from Congress, after Sept. 17, “our expectation … is that the agreement will then go forward,” Moniz told journalists in Vienna on Sept. 14. “Certainly our thinking … is [then] on the question of implementation.”

“This is a large task,” Moniz said. “And my view … is that over the next year and a half, the most important thing is in fact implementing well on all sides, and essentially demonstrating the value [of the Iran nuclear deal] so that … next year, what we will see [is that] the Iran nuclear program has been rolled back substantially.”