NSC Senior Director for non-proliferation Paul Irwin is set to head a new NSC directorate on implementation of the Iran nuclear deal. 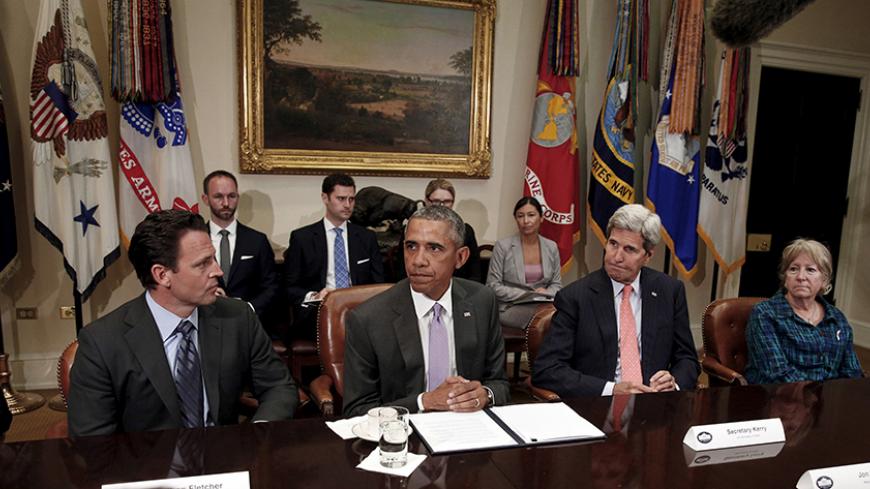 President Barack Obama, with Secretary of State John Kerry (2nd R) at his side, meets with a group of veterans and Gold Star Mothers to discuss the Iran nuclear deal at the White House in Washington, Sept. 10, 2015. - REUTERS/Kevin Lamarque

The US National Security Council is joining the State Department in establishing a new office to oversee implementation of the Iran nuclear deal, to be headed by NSC Director for Nonproliferation Paul Irwin, a veteran of the US nuclear negotiating team, US officials tell Al-Monitor.

The new directorate signals the White House plans to play a lead role in the critical implementation phase of the landmark nuclear deal. It comes as the Obama administration has also tapped several veterans of the US-Iran nuclear negotiating team to play a continued role interacting with the Iranians on implementation issues. Among them, State Department senior arms control adviser James Timbie, and top State Department Iran sanctions coordinator Christopher Backemeyer, who, along with Irwin, were key members of the US team with firsthand experience negotiating the deal with the Iranians.

“The NSC is standing up a new directorate which will be focused on the implementation of the [Joint Comprehensive Plan of Action]” a senior US administration official told Al-Monitor in response to a query.

“Successful implementation of the JCPOA is one of the president's top priorities and the new directorate will ensure continued focus on the issue,” the official said. “The new Implementation Directorate will be coordinating and working closely with Ambassador [Stephen] Mull's team at the State Department.”

Irwin, a former NSC director of nonproliferation involved in the past two years of talks, is expected to have a number of staff working below him in the new directorate, and will work closely with Mull’s shop as well as with Timbie at State. Because of their experience with the Iranians, Timbie and Backemeyer will continue to participate in the State Department's interactions with the Iranians, sources said.

Mull joined Ambassador Tom Shannon, who has been nominated to succeed Wendy Sherman as undersecretary of state for political affairs, at talks on implementing the deal in Vienna last week with Iran, the European Union and five permanent members of the UN Security Council plus Germany. The deal entered its official “adoption” phase Oct. 18, 90 days after the UN Security Council passed a resolution endorsing the deal.

Iran must take multiple agreed steps — including reduce the number of centrifuges at Natanz to 5,000, reduce its stockpile of low enriched uranium to 300 kilograms and remove the core of its uncompleted Arak plutonium reactor. When the International Atomic Energy Agency (IAEA) verifies those steps have been taken, the parties are expected to announce “implementation day” when the United States and European Union will lift nuclear-related sanctions. Iran’s Supreme Leader Ayatollah Ali Khamenei, in a letter last week, said Iran will not ship out the bulk of its LEU stockpile to Russia or remove the Arak calandria until the IAEA issues a report on past suspected military dimensions of Iran’s nuclear program. The IAEA has agreed to produce the report by Dec. 15.