Iranian officials and media outlets are still busy panning US efforts to advance an anti-Tehran agenda at a two-day conference in the Polish capital, saying the event will only fan the flames of chaos in the Middle East. 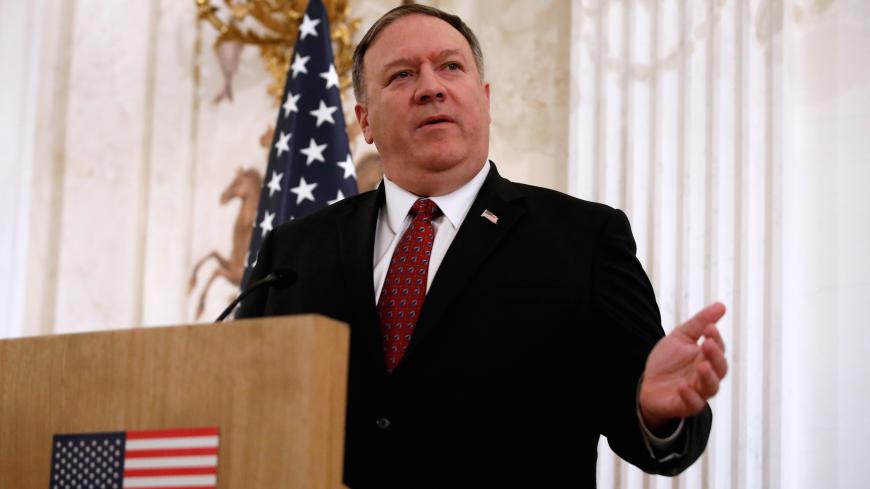 US Secretary of State Mike Pompeo speaks at a news conference at the Lazienki Palace in Warsaw, Poland, Feb. 12, 2019. - REUTERS/Kacper Pempel

Tehran's rage and discontent do not seem to have died down since US Secretary of State Mike Pompeo's announcement of its Warsaw conference last month. Iranian officials are busy trying to mitigate the perceived negative impacts of the event widely considered an American push to mobilize the world against the Islamic Republic.

"The summit is of the same nature as other steps which Tehran construes as US failures in the past 40 years," reported hard-line newspaper Javan Feb. 13, only hours before the conference kicked off in Warsaw. According to the paper, which echoes the views of the country's powerful Islamic Revolutionary Guard Corps, "Signs of that failure began to emerge weeks before the event, as Russians openly shunned it." The paper delighted in the fact that the United States had to amend the meeting's original stated purpose, broadening the agenda to peace and security in the Middle East rather than exclusively focusing on Iran.

On the diplomatic front, Iran has been trying to change the path of the conference first by summoning Poland's envoy to Tehran in protest. Iran's foreign minister has also used social media to shame Warsaw with an allusion to his country's hospitality for Polish refugees during the World War II. To mend the strained ties, Poland later dispatched its deputy foreign minister to soothe Tehran's anger ignited by the diplomatic row.

Last week, Iran's ambassador to Warsaw spoke of promises by Polish authorities that the conference would not be an anti-Iran platform. But on the day the event opened, the furious rhetoric continued. On its website, Iran's mission in Warsaw slammed US policy in the region as "unconstructive, biased, confused and self-contradictory." Criticizing efforts to exclude Iran, the statement defended the Islamic Republic as a "responsible" and "stabilizing" player in the Middle East. It also painted a gloomy picture for the conference's outcomes, predicting it will further escalate "distrust, chaos, crisis and conflict in the region."

Iran's military chief Maj. Gen. Mohammad Bagheri downplayed the gathering as a "worthless" step with no impact upon "Iran's activities and power."

Tehran believes its battle over the Warsaw summit has succeeded in keeping Washington from its goals, as the invitees have been convinced to dispatch lower-ranking participants. Moscow openly declined the offer, EU Foreign Policy chief Federica Mogherini said she was tied up with an African visit and UK Foreign Secretary Jeremy Hunt stressed that he would only focus on the ongoing humanitarian crisis in Yemen.

"The monthlong media hype by the United States has harmed Washington rather than served it," reported moderate news analysis outlet Rahbord-e-Moaser. The piece claimed that the US efforts in the Polish capital will be a repeat of a similar "failed" attempt at a UN Security Council meeting chaired by President Donald Trump last September.

During the past several weeks, social media platforms have been indurated with mixed reactions to the summit. Proponents of regime change in Iran have been writing extensively in a back-and-forth with pro-government Iranians. But one particular Twitter hashtag, #WeSupportPolandSummit, has been found to have been employed suspiciously often by suspected bots. A BBC Monitoring analysis found that 14,000 of those tweets were posted by only eight users.

With the US-Europe relationship far from its best, Iranian officials have been boasting about creating a gap between the two sides that has widened following the unilateral US pullout from the Joint Comprehensive Plan of Action. While Europeans are trying to prop up the fragile nuclear deal and keep it alive, Iran's supreme leader has repeatedly advised the country's diplomats against trusting them. But his latest remarks on the matter took a softer tone when he painted some European states as the lesser evil when compared to the United States.

"Apart from the criminal United States, today the Iranian nation considers some of the European states deceitful and untrustworthy," Ali Khamenei said in a statement called "The Second Step" released the day after the 40th anniversary of the country's revolution. In the missive, he kept the door open for Iranian authorities to hold talks with Europeans to work out solutions. But he was as uncompromising as ever regarding Iran's arch-foe. "As for the US, no solution is imaginable. … negotiations with [Americans] bear no fruit but material and moral harm," he warned.