Poland's deputy foreign minister visited Tehran to assure Iranians that an upcoming controversial conference in Warsaw will not turn into an anti-Iran event. 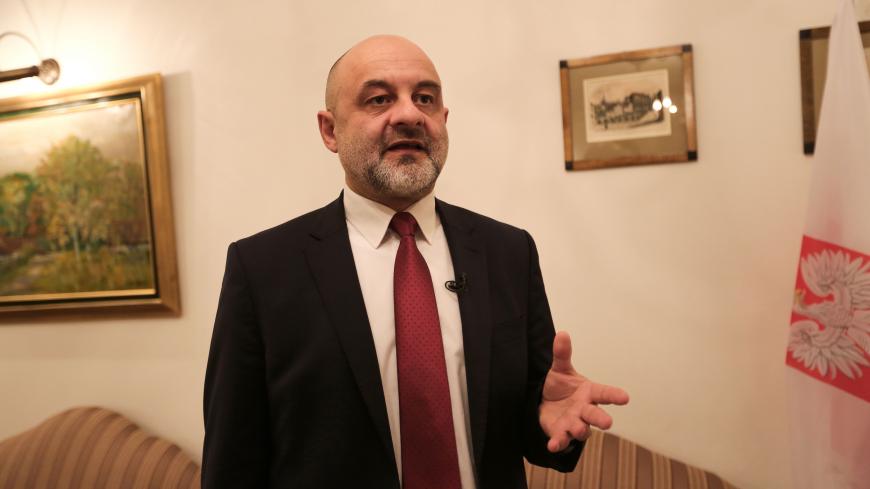 Warsaw is set to host the event Feb. 13-14, when Tehran's adversaries are expected to discuss what is described as Iran’s destabilizing role in the region. Lang gave Iranian authorities assurances, however, that unlike what they fear, Poland will not allow the conference to become a platform for anti-Iran rhetoric. His Iranian counterpart, Abbas Araghchi, warned that Poland needs to be careful about the consequences of the event.

Reformist media in Iran interpreted the visit as an effort to win back Iranians' hearts and minds. It was "a Polish push for reconciliation," Ghanoon said, while Ebtekar shed light on the implications of the trip and the prospects of the Iran-Europe ties. Likening the situation to "walking on thin ice," the paper stressed the sensitivity of the current circumstances and how various factors could jeopardize relations between Iran and Europe.

Earlier this month, to vent its anger, Iran summoned Poland's charge d'affaires in Tehran to grill him over his country's decision. Foreign Minister Mohammad Javad Zarif also took to Twitter to review history and make Warsaw feel ashamed for holding an "anti-Iran circus" while "Iran saved Poles in WWII." Over 100,000 Polish citizens took refuge in Iran during the Second World War.

But to Iran's hard-liners, who spare no chance to question Iranian diplomats (mostly hailing from the rival moderate camp), the Foreign Ministry has been too passive and has failed to move beyond Twitter diplomacy in the Poland row.

Social media reactions to the meeting were mixed. The portion of the opposition that promotes regime change has largely hailed the conference as a key step toward further tightening the noose around Iran's neck. Still, there were some in this group who dismissed direct foreign interference. "We have to make the decision on our own before we ask for foreigners' help. We cannot let them do the job and treat us as extras [with no role]," a Twitter user named Rayan said.

Another Twitter user, defending the Islamic Republic's official position, predicted that the Warsaw meeting will be fruitless. "The No. 1 idiot [US President Donald Trump] will bow to Iran's power and unity after he fails in the Warsaw conference and has to again watch the massive Iranian turnout Feb. 11," which is the 40th anniversary of Iran's Islamic Revolution.

The Warsaw conference has already been snubbed by Russia and several European Union members have suggested that they will do so; the bloc's foreign policy chief Federica Mogherini has also said she will not show up due to other commitments.

The meeting is to be held at a time when both Iran and the European Union are struggling to keep a crumbling Joint Comprehensive Plan of Action (JCPOA) alive following the US pullout May 8.

Europe's Special Purpose Vehicle (SPV), meant to serve as a back channel to handle financial transactions and bypass US sanctions on Iran, has been expected to be unveiled for weeks now. The implementation has, nevertheless, faced setbacks such as those caused by accusations that Iran has been behind assassination plots on European soil, a matter being closely followed up by the Dutch and Danish governments. Tehran contends that pressure from the US government on Europeans is creating cracks in the ongoing cooperation.

To many Iranians, the Polish government's hosting of the conference is Warsaw's step toward pleasing the Americans in a continuum that earlier saw the Poles propose hosting a US base in their country and even express willingness to name it Fort Trump.

Iran should launch a unified diplomatic push to deflect the US efforts aimed at creating an anti-Iran consensus, Iranian observer Jalal Khoshchehreh proposed in Ebtekar. "Doing so, Tehran will keep Washington grappling with its legitimacy crisis."

Correction: January 23, 2019 An earlier version of this article missated the upcoming date of the Warsaw conference. It is Feb. 13-14.