Turkish army brass at odds over military operation in Syria

The Turkish government’s removal of two key commanders from active duty has revealed the discord in the Turkish military over the planned military operation east of the Euphrates River. 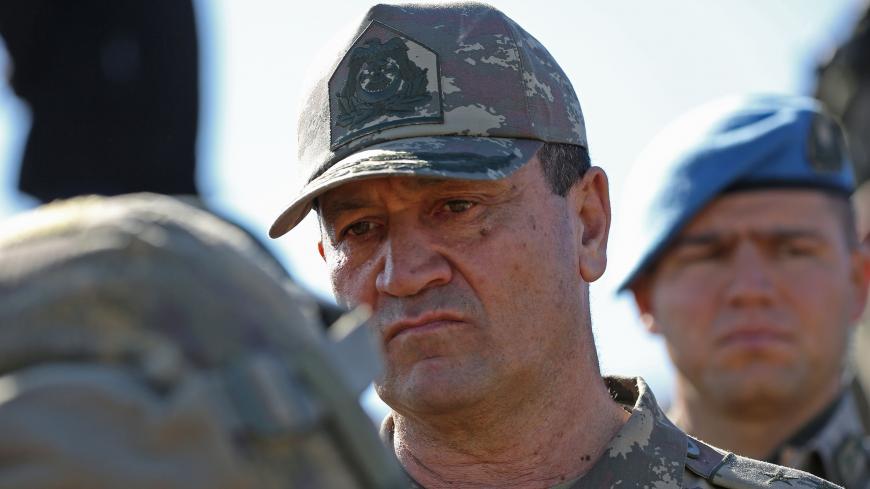 While Turkey was negotiating with the United States to draw a road map for the area east of the Euphrates River and Manbij and also coordinating with Moscow to get Russia's green light for a possible military operation against the Kurdish forces, an unusual development erupted in the Turkish army: Four-star Gen. Ismail Metin Temel, the commander who runs the Iraq and Syria fronts and built a reputation for his leadership skills during the Euphrates Shield and Olive Branch operations in Syria, and Brig. Mustafa Barut, the commander of the Fourth Commando Brigade, were suddenly transferred to desk jobs.

Turkish news outlets reported they were removed over their objections to the east Euphrates plans. The move against the two commanders highly valued by President Recep Tayyip Erdogan exposed the contradictions and disagreements that are dividing Turkey's top brass.

Deniz Zeyrek, a columnist for Sozcu and a seasoned defense and diplomacy writer, summarized their objections in three points:

Until now, the top military ranks had kept quiet on their differences of opinion, but over the past days retired officers have voiced unease with the government’s Syria policy.

US President Donald Trump’s sudden decision to withdraw American troops from Syria and then tasking Turkey to deal with the remnants of IS raised questions about an imminent operation east of the Euphrates.

The deepest schisms are between what Ankara wants and what Trump means by offering to hand over the territories that American forces will evacuate. While the United States assigns the mission of combating IS to Turkey, Ankara is talking about wiping out the autonomous Kurdish structures emerging in northeast Syria.

Ankara’s original plan was to set up a buffer zone of 10-40 kilometers (6-25 miles) between the Euphrates and Tigris Rivers that would be cleansed of the YPG. Turkey doesn't have any ambition to go deep inside Syrian territory and reach Deir ez-Zor to fight against IS.

There is also the option of the leaving the liberation of Syria to its own army. Some are questioning the wisdom of sending Turkish troops so far from the border.

While the critical question of whether the United States will allow Turkey to trample the Kurds awaits an answer, first Sen. Lindsey Graham and then Trump voiced views that shook Ankara. After meeting Trump, Graham said, “Trump will have gained the following by withdrawing from Syria: IS will be totally decimated. Iran won’t be taking over the areas IS will evacuate. Our Kurdish allies will be protected.”

Graham spoke of a formula to prevent Kurdish-Turkish clashes, and Trump is supposed to assure Turkey that it will have the buffer zone it needs. In his Jan. 2 Cabinet meeting, Trump also said, “We want to protect the Kurds.”

Yet if Turkey's plan for the area is as destructive as its one in Afrin, how are the Americans going to protect the Kurds? If the buffer zone is the formula to distance Kurds from the border, how will it be secured without clashes? How can the United States, which is planning to withdraw its 2,000 troops from the field, enforce the buffer zone?

Russia is trying to persuade Ankara to give up its operational plans and promises a different type of buffer: Deploying the Syrian army to Manbij and east of the Euphrates. According to the Russian thinking, when the Syrian army comes, the YPG’s control will end. The Syrian regime also says it will dispatch troops to the region only when the YPG withdraws.

Turkey, on the other hand, suspects the Kurds will devise a formula to remain in the area or under the protection of the Syrian army. While Turkey is struggling between the US and Russian plans, another element makes the issue even more complex: Washington wants to deploy Saudi, UAE and Egyptian troops in the region, hardly friendly forces to Turkey. The plan has already made Turkish officials nervous. Reports that Egypt has been trying to get Kurds and Damascus to negotiate have made Turkey even more tense.

Keeping Iran away from Syria is not a source for real concern for Turkey at the moment.

Why should Turkey, which is already defying US sanctions against Iran, challenge Tehran in Syria?

There are also questions about the likelihood of success for a land operation east of the Euphrates. Afrin, apart from a single exit corridor via Tel Rifaat, was already under siege during the previous operation. As the area was isolated, the YPG had limited manpower and weaponry. East of Euphrates, however, the YPG is equipped with US weaponry and experience gained in their combat with IS. Afrin was surrounded by armed groups guided by Turkey that had declared hostility to the YPG. The southern flanks of the Euphrates-Tigris line is wide open to surprises.

Keeping in mind field conditions, there is no guarantee of holding onto an area of 450 kilometers (some 280 miles) and ensuring its stability.

Another issue of serious quarrel is the deplorable record of the local militia forces that are accompanying Turkish troops. There may be strong reactions to deploying such groups, which have been accused of looting, torture, maltreatment, abductions, theft and destruction to the area.