For decades, the Turkish government took pride in burning cannabis fields in its battle against PKK terror. Now, a boasting Erdogan leads Islamists in celebrating industrial hemp cultivation as a method of resistance to the West. 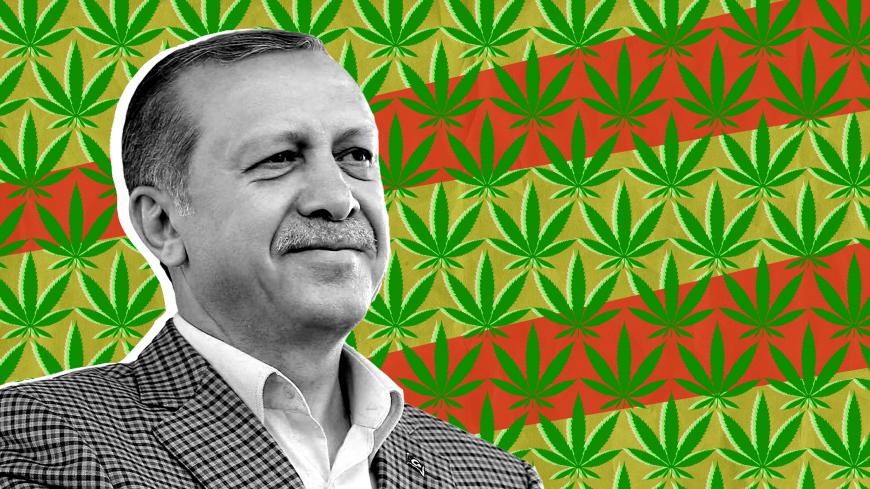 Recep Tayyip Erdogan has flip-flopped on several crucial issues, but not on his dislike and disapproval of alcohol and tobacco consumption or on his outspoken war on drugs. Easily justified with Islamic teaching, Erdogan's Justice and Development Party has passed several bills making the production of tobacco and alcohol — even home-brewing — almost impossible with increasingly strict regulations. Drug wars are enforced with harsh punishment for users and dealers. Government spending to prosecute drug dealers has gradually increased, reaching up to 720 million liras in 2016 (about $140 million with today’s exchange rate). That is precisely why Erdogan’s advocacy for cannabis cultivation in his campaign speeches surprised audiences.

Indeed, the restrictions on hemp production were lifted in 1990 and re-regulated by the Turkish parliament to make it even more liberal in September 2016. Today, it is already legal to grow hemp in 19 cities, but you need government permits. The updated 2016 legislation relaxes the permission process for farmers. It also adds a flexible licensing process for researchers.

However, it did not catch the attention of Erdogan until now. A source close to the Palace told Al-Monitor, “Turkey is working with international consulting firms, and we believe they are the ones that brought this lucrative plant to the president’s attention.” Global consulting firm McKinsey & Co. has given similar advice to Lebanon. The Turkish agreement to work with that firm was cut off abruptly and suspiciously after widespread public reaction.

But desperate times call for interesting measures. On Jan. 9, Erdogan blasted out to the "enemies of Turkey who pretend to be friends," saying that they have compelled Turkey to end its cannabis production. In an emotional speech, referring to his ancestral city of Rize and remembering when they used to make underwear from hemp that is more absorbent than any other material, Erdogan said Turkey has been importing the plant but is now taking steps for its widespread production.

On social media, pundits took this “enemies who pretend to be friends” to be the United States, which pressed to ban opium poppy production in 1971. Up until then, Turkey was a major producer of legal opium, but farmers were known to produce also significant amounts of the plant illegally.

Currently, Turkey has one alkaloid processing plant in Central Anatolian province of Afyon, which means "opium" in Turkish. Afyon is known for its high-quality poppy seed production. The factory produces ingredients to be used in prescription drugs. Turkey’s conservative segments now applaud Necmettin Erbakan, the late leader of the Islamist movement in Turkey, for his firm support for the construction of the plant in the late 1970s.

Pro-government media promptly started distributing informational graphs and pieces on the benefits of cannabis production — which they referred to as a national matter— to the health sector and the economy, declaring this to be a “cannabis war” and praying for a victory. Even the uses of hemp for the Ottoman navy were cited in the news.

Turkish government television TRT started airing infomercials about cannabis while referring to it as an “Anatolian plant” and elaborating on countless uses of hemp. Islamist media particularly was quite eager to back Erdogan. For example, Mehmet Toprak, a columnist for Dirilis Postasi, wrote a piece titled “Cannabis will make the US' dollar weapon explode in their own hands.” Toprak emphasized that “President Erdogan’s decision on cannabis production is a turning point in our history. It is as revolutionary as the July 15 victory. This decision shows us how crucial it is to stand behind Erdogan for the future of our country and the Muslim lands.”

"Cannabis production is now presented as a form of national resistance to the West," said an Agriculture Ministry bureaucrat who is expecting to receive significant incentives from the government to spread plantations. Personnel at the ministry believe Erdogan is serious. “In the last two years, since the legislation passed, not much has been done to assist the farmers to harvest hemp; now there is a national call for it. If it proves lucrative, in a few years it will be legalized in more than 19 cities, and we have to invest in a way to process the plant as well,” added the senior bureaucrat, who spoke on the condition of anonymity.

It should also be noted that the Turkish government’s official rhetoric encourages the production of low THC cannabis, which is commonly known as industrial hemp. It lacks properties to turn into heroin or other drugs. Agricultural experts appearing in different media outlets have been calling for a national hemp seed production that will classify as industrial hemp.

All of this, including the Islamist and state support behind cannabis production, appears as lucrative and smart public policy planning. Yet this is rather an incomplete presentation of Turkey’s agricultural politics.

Al-Monitor spoke with food and agricultural engineers to evaluate the recent interest in cannabis cultivation. All the experts in the field are delighted about the proposed government support for a crop. Yet they are also surprised because little has been done in the last decade. One agricultural engineer working as a government employee said on the condition of anonymity that “food prices have skyrocketed, particularly in the last year. For example, onion [which is a staple ingredient for most recipes in Turkish cuisine] prices went up 185% in 2018. While its population is increasing, Turkey is producing fewer basic crops like wheat, barley, chickpeas, beets, beans and potatoes now than it did five years ago. Plus, cotton and flax production, just like hemp, has been decreasing in volume gradually over the last 15 years. This can be blamed on the government’s lack of planning for the impact of climate change on crops; its policies to lift tariffs on these goods, encouraging cheaper imports; and the rise in pesticide and fertilizer prices, making production more expensive. The government has failed to support farmers almost every step of the way, leaving them alone to the whim of the weather, cheap exports and inadequate storage disasters.”

A food engineer conducting research on food security at an Istanbul university concurred with her colleague. "These great promises on cannabis cultivation as a form of ultra-nationalistic stand against the West are exciting for the crowds … but how about other staple goods people need to survive? The arable land and number of farming families are dwindling. In 2017, meat [red and white] consumption in Turkey per person was averaging around 30 kilograms. In the European Union, that average is almost 70 kilos per person. We are much more dependent on grains and vegetables in our diet. Now if we switch to cannabis, what will people eat?" she said, speaking on the condition of anonymity.

According to The Turkish Official Gazette on Jan. 16, all tariffs are to be removed on imports of rice, wheat, barley, corn and beans. Experts fear cannabis production on a large scale will only add to increasing food insecurity in Turkey, and government-published data support the validity of such concerns.

Whether McKinsey or another consulting firm recommended increasing cannabis production in Turkey has not been confirmed; however, cannabis is now making headlines in Turkish media with all the positive vibes. For years, the crop appeared in the media as the most important income source of the Kurdistan Workers Party, and security forces burned the hemp fields. Looking at the map of cities in which cannabis cultivation has been legalized, we see in the southeastern areas that the majority Kurdish population has not been allowed to grow the crop.

As Turkey approaches municipal elections, the promise of a lucrative cannabis dream that would benefit dozens of different industries seems like Erdogan's newfound, charming slogan to keep the crowds interested if not convinced.