In response to Trump's tweet threatening to destroy Turkey economically if it attacked the Kurds, Erdogan focused on the other half of the tweet: a buffer zone along the Syrian border. 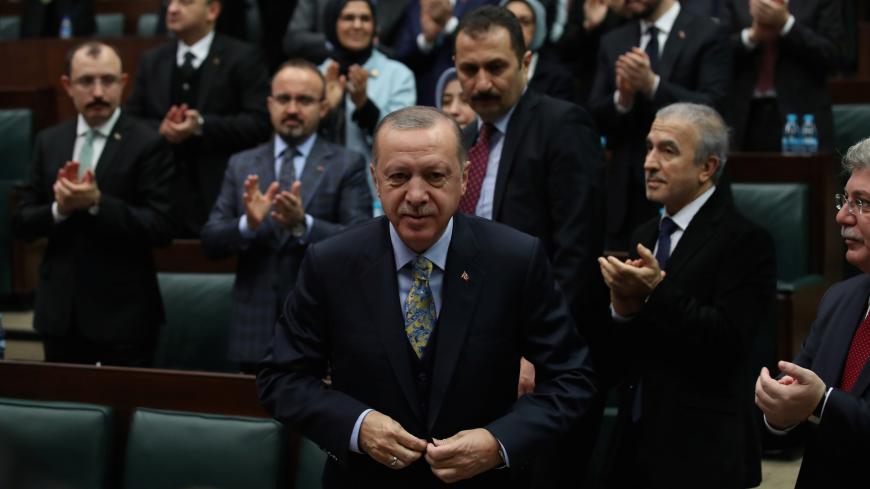 Turkish President Recep Tayyip Erdogan leaves his seat to address members of parliament from his ruling Justice and Development Party during a meeting at the Turkish parliament in Ankara, Turkey, Jan. 15, 2019. - REUTERS/Umit Bektas

ANKARA, Turkey — President Recep Tayyip Erdogan demonstrated his political skills today when he eschewed attacking the US president for threatening Turkey and changed the Syrian debate from wiping out the Kurdish militia to erecting a buffer zone along the Turkish-Syrian border.

Erdogan spoke a day after President Donald Trump posted a tweet about the US withdrawal from Syria, in which he threatened to "devastate Turkey economically if they hit Kurds.” The comment provoked an outcry. Opposition politicians and centrist media joined the government in condemning Trump for his heavy-handedness.

Erdogan himself is fond of aggressive rhetoric and bluster intended to mobilize nationalists and frighten his enemies. So when he mounted the podium to address his party’s legislators in parliament today, observers expected him to respond to Trump in kind.

Instead, Erdogan focused on a different part of Trump’s tweet, where the American president had written: “Create 20 mile safe zone.”

Erdogan said this was a proposal he had first made to President Barack Obama, and that he had discussed it with Trump in a phone call on Monday night. Trump had endorsed the idea and suggested the dimension of 20 miles deep.

Erdogan told the legislators the zone “will be formed by us” but, in comments to reporters later, he said there was no decision to erect such a zone yet.

“If the coalition forces, and the United States especially, if they give us logistical and financial support with the condition of protecting the people’s safety there, we would accomplish such a safe zone,” Erdogan said.

“We can provide services, especially TOKI,” Erdogan told reporters in parliament’s corridor, referring to the acronym for Turkey’s state housing agency. “My plan would be to build two-story houses with gardens of 500 square meters so the inhabitants could begin a new life.”

He added such a buffer zone “would also block migration completely,” an idea that would appeal to European members of the US-led coalition in Syria.

He said Turkish and US officials would negotiate the details of the zone.

NTV reported that Erdogan would also discuss it when he goes to Russia Jan. 23 for talks with President Vladimir Putin as part of the Astana process for Syria, which includes Iran. The Russian leader has also suggested a buffer zone along the Turkish-Syrian border, but one erected by Syrian government troops.

Russia is opposed to Turkey’s intervening in Syria. It argues the departing US troops should be replaced by Syrian government forces so that Damascus regains control of northern Syria.

Referring to the threat in Trump’s tweet, Erdogan told legislators, “The message given by Trump upset me and my friends. Yesterday we had a phone call with Trump. It was a positive conversation.”

Hours later, Erdogan’s chief adviser, Ibrahim Kalin, told the press, "The issues of economic threats have been left behind as they were concluded nicely during the phone call."

For weeks the Turkish president has been telling his country that the army would be going into northeast Syria to eliminate the Kurdish militia, the People’s Protection Units (YPG). And over the weekend he said the Turkish armed forces had completed their preparations for such an offensive.

Turkey sees the YPG as a pack of terrorists as it is the sister organization of the Kurdistan Workers Party (PKK), the Turkish Kurdish insurgents. But the United States has found the YPG an effective fighting force against the militants of the Islamic State.

When a reporter asked Erdogan if the YPG would have any role in the buffer zone, he replied, “They are terrorists. Can we leave this area to the terrorists?”

But there is one issue that Erdogan did not address at all: the fact that in large swaths of such a buffer zone, Syrian Kurds, not Arabs, would be in the majority. If Turkey plays the leading role in erecting and maintaining such a zone, Turkish administrators would find themselves dealing with people whose relatives have served in the YPG and who support the YPG’s political wing, the Democratic Union Party (PYD).

Last week the co-chairman of the PYD, Shahoz Hasan, said that if Turkish forces enter northeast Syria, they would be opposed. “We will be ready,” Hasan said, referring to Kurdish fighters.

It is unlikely that if Turkish forces cross into Syria with the declared aim of setting up a buffer zone, the YPG will meekly retreat 20 miles to the south.

Turning to an issue among Turkey’s Kurds, the solitary confinement of the imprisoned leader of the PKK, Abdullah Ocalan, has provoked a hunger strike by a legislator of the pro-Kurdish People’s Democratic Party (HDP), Leyla Guven.

Last week, the HDP issued a statement saying that Guven’s condition had reached ''a life-threatening stage.” Having begun fasting on Nov. 8, Guven has lost about 15 kilograms, can no longer walk without assistance, and cannot drink liquids — including water.

The statement said “at least 171” other prisoners had joined the hunger strike “in order to terminate the isolation imposed on Imrali” — a reference to the island where Ocalan has been held since he was captured in 1999 and later sentenced to life in prison for separatism and terrorism.

On Saturday, Abdullah Ocalan’s younger brother, Mehmet Ocalan, who bears a striking resemblance to Abdullah, was allowed to visit the founder-leader of the PKK. NTV reported it was Abdullah Ocalan’s first visit in two years.

Omer Ocalan, a nephew of Abdullah and a legislator for the HDP, told the press that the government had invited Mehmet to Imrali.

“This visit happened thanks to the efforts of Leyla Guven and the other political prisoners” on hunger strike, Omer Ocalan said. Whether Guven would now resume eating was “her own decision,” he added.

Al-Monitor contacted an HDP legislator, Ayse Acar Basaran, who is in touch with Guven, and asked if Mehmet’s visit would end the hunger strike.

Basaran replied by text message: “This visit does not mean the solitary confinement has been lifted. For that reason the hunger strike will continue.”