Erdogan: Turkey to expel Kurds from Manbij if no one else does

Erdogan vows that Kurdish militia members will be removed from Manbij, one way or another; Greek prime minister visits Ankara; jailed CHP legislator ends hunger strike, but Kurdish woman continues hers despite being released. 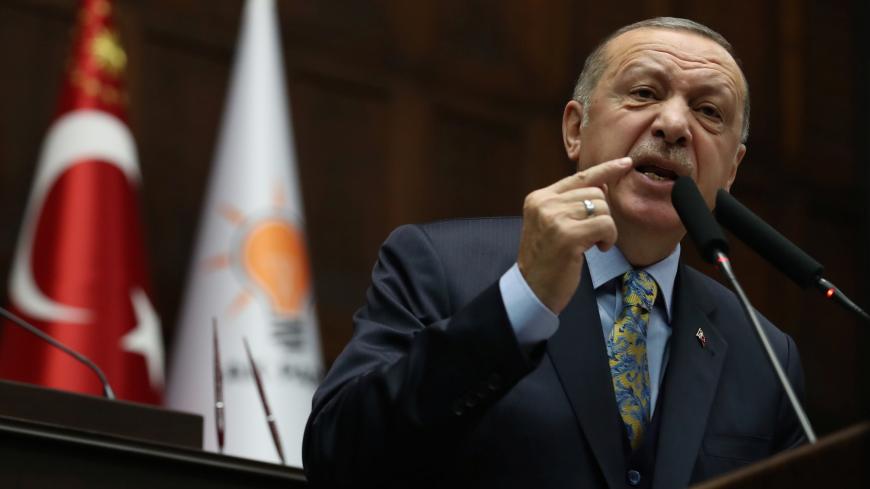 Turkish President Recep Tayyip Erdogan addresses members of parliament from his ruling Justice and Development Party during a meeting at the Turkish parliament in Ankara, Turkey, Jan. 15, 2019. - REUTERS/Umit Bektas

ANKARA, Turkey — President Recep Tayyip Erdogan warned today that if Syrian Kurdish militia members are not expelled from Manbij and the Turkish-Syrian border zone, Turkey will do the job itself.

Making his weekly address to legislators of his Justice and Development Party in parliament, Erdogan expressed impatience with the United States for its perceived failure to deliver on understandings he reached in phone calls with President Donald Trump.

“We have warm conversations with Trump but, on the lower level of diplomatic and military issues, the US offers no concrete plan,” Erdogan said.

“If the terrorists in Manbij are not removed in the next few weeks, our waiting will end. We will go our own way and nothing will stop us from implementing our plans, including a sanctions list,” he said, referring to the possibility that the United States would penalize Turkey for intervening in the north-central Syrian town.

Turkey reached an agreement with the United States for the withdrawal of the Kurdish People’s Protection Units (YPG) from Manbij last year. But despite Trump’s announcement in December that US forces would pull out of Syria, the town continues to be controlled by US troops and the allied Syrian Democratic Forces (SDF) — of which the YPG is the largest component.

Similarly, Turkey says the Americans have not done enough toward setting up a safe zone along Syria’s northeast border with Turkey, a zone free of the YPG. Turkey regards the YPG as a terrorist organization as it is a sister organization of the Kurdistan Workers Party (PKK), a Turkish Kurdish insurgent group.

“If the US does not contribute to a safe zone under the control of Turkey, we will take the matter into our own hands,” Erdogan said.

“We don’t accept any other formula than a safe zone where Turkey has control and other countries provide logistical support,” the president added, indicating he expected American air power to back Turkey.

But if Turkey does not get Washington’s support for its plans in northern Syria, it risks a confrontation with both the United States and Russia.

Trump warned last month he would “devastate” the Turkish economy if Turkish troops marched into Syria and attacked the SDF. Russia, which has armored cars on the outskirts of Manbij waiting for the Americans to leave, has said Syrian government forces should retake control of northern Syria after the US withdrawal. President Vladimir Putin supports the idea of a safe zone along Syria’s border with Turkey, but says it should be maintained by Syrian government troops.

Reuters reports the safe zone is on the agenda of a ministerial meeting of countries fighting the Islamic State group that will be held in the United States on Wednesday. Turkish Foreign Minister Mevlut Cavusoglu is due to attend.

In other news, Greek Prime Minister Alexis Tsipras landed in Ankara this afternoon for talks with Erdogan on a variety of issues, some of which have plagued Turkish-Greek relations for decades.

The prime minister stepped down from a small air force passenger plane, wearing a dark suit and his signature white shirt with no tie.

He and Erdogan have met several times and they appear to get along despite sharp differences in views. Their last meeting in each other’s capitals was a public relations flop. In December 2017, Erdogan went to Athens and suddenly called for the renegotiation of the 1923 Treaty of Lausanne — the foundation of modern Turkey as well as Turkey’s relations with Greece. Greek President Prokopis Pavlopoulos told the press it was out of the question and Tsipras said the proposal left him confused.

The issues facing Turkey and Greece include Cyprus — which has been divided into a Turkish-occupied north and a Greek Cypriot south since Turkey invaded in 1974 after a coup instigated by the junta in Athens; tension between Cyprus and Turkey over exploration for oil and natural gas off the Cypriot coast; refugees who cross illegally from Turkey to Greece in small boats; eight Turkish soldiers who found refuge in Greece after taking part in the attempted coup of 2016; and the Turkish state’s closure of the Greek Orthodox seminary on Heybeliada, an island near Istanbul.

A Turkish journalist of Greek origin, Yorgo Kirbaki, told the Turkish channel NTV that while the Greek press is pessimistic about Tsipras’ visit, he sees it as a positive move. Kirbaki said Tsipras has been pursuing a policy of improving relations with Greece’s neighbors. The prime minister's foremost success so far has been to overcome the name dispute with the Former Yugoslav Republic of Macedonia. The country is now called North Macedonia in deference to the northern Greek province of Macedonia.

Of all the issues on the table, the one that seems to be favored by Washington for resolution is the seminary on Heybeliada. The ecumenical head of the Orthodox Church, Patriarch Bartholomew, is a graduate of the theological school. NTV broadcast a video on the seminary today, showing a classroom with empty desks of black wood and its lovingly preserved chapel with frescoes and golden columns. Presidents Bill Clinton, George W. Bush and Barrack Obama urged Ankara to reopen the seminary. But Ankara seeks matching concessions for the Turkish-speaking minority in eastern Greece.

Another Turk of Greek origin, Stelyo Berberakis, who reports for NTV from Athens, said the idea had been floated that Greece would open a mosque in Thessaloniki, the northern town where Ataturk was born, in return for Turkey’s allowing Heybeliada seminary to reopen.

Separately, the issue of hunger strikes came to the fore today when Kemal Kilicdaroglu, the leader of the biggest opposition party, the Republican People’s Party (CHP), addressed his legislators in a chamber of parliament.

More than 200 prisoners are currently on hunger strike in a bid to force the government to allow the imprisoned PKK leader, Abdullah Ocalan, to have regular meetings with his lawyers and relatives.

The strikes were initiated by Leyla Guven, a legislator for the pro-Kurdish Peoples' Democratic Party, who was imprisoned in January 2018 for criticizing Turkey’s military intervention in Syria.

Kilicdaroglu spoke of Eren Erdem, a former CHP legislator who has been detained for seven months on charges of being a Gulenist terrorist. Erdem began a hunger strike Jan. 28, saying he wanted a fair trial and “a fair, democratic and fully independent Turkey.”

Addressing Erdem, Kilicdaroglu said: “We, as the CHP and this country, need you. Please end your hunger strike for justice.”

However, there has been no such let-up by Guven, who has not eaten for 90 days. Her health is failing and she cannot walk by herself.

On Jan. 25, a court ordered her release, but Guven continued her fast at home.