Former Rep. Buck McKeon, R-Calif., donated $1,000 to a key lawmaker the same day he lobbied his office on behalf of the Saudis — a common practice in Washington. 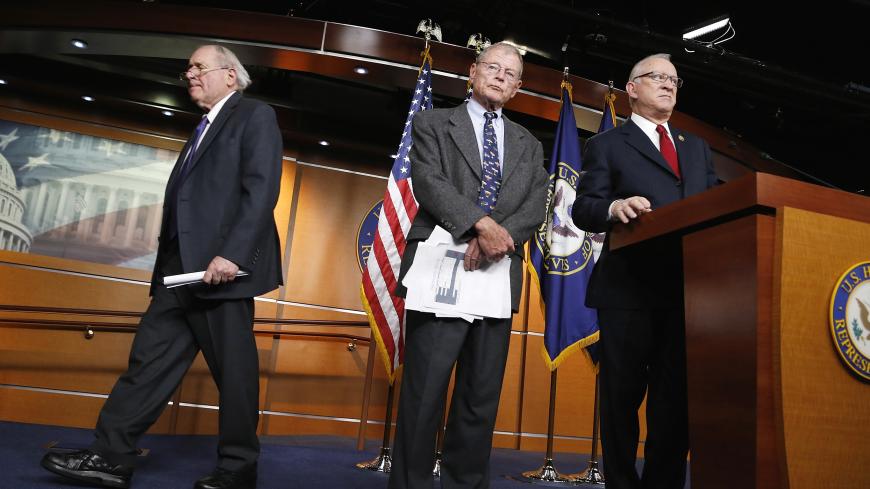 Many lobbyists ditched Saudi Arabia after the murder of Jamal Khashoggi, but several clients are still sticking with their lucrative patron. And at least one of those lobbyists met with a key Senate staffer at a lawmaker's birthday party the same day his firm donated to the lawmaker’s campaign.

The California Republican, who now heads the McKeon Group lobbying firm just outside Washington, told Al-Monitor that the donation was unrelated, although the payment occurred on the same day.

“I’ve had some money left over in my campaign fund,” McKeon said. “I served with Jim Inhofe when I came to Congress in 1993, we’ve been friends ever since and I have supported him on his campaign.”

McKeon served as the chairman of the House Armed Services Committee from 2011-2015 and has lobbied for Riyadh since 2016. He also made two other recent donations to Inhofe — $1,000 in October, shortly after Khashoggi’s murder, and another $1,000 in July.

The former chairman told Al-Monitor that David Keysor, the Chief Operating Officer for the McKeon Group, and McKeon's son attended Inhofe's birthday party on Nov. 14. During the event, Keysor, who is not a registered lobbyist for Riyadh, discussed Saudi Arabia and arranged a subsequent phone call. The two then discussed a Yemen war powers resolution by phone on Nov. 29.

The party came as Congress was gearing up to retaliate against Riyadh for murdering Khashoggi with the resolution, which would direct the Donald Trump administration to pull US military support for the Saudi-led coalition against Yemen’s Houthi rebels. Inhofe voted against the resolution. It ultimately passed 56-41, only for House Republican leadership to forestall a floor vote in the lower chamber.

McKeon has also lobbied his former colleagues on the House Armed Services Committee on behalf of the Saudis. In July he asked Rep. Joe Wilson, R-S.C., to champion legislation sanctioning supporters of the Houthi rebel group. That same month, he arranged a meeting between Wilson and the then-Saudi ambassador to the United States, Khalid bin Salman.

Congress never advanced the bill, and McKeon never donated to Wilson’s campaign. But he has donated to several other former colleagues on the House Armed Services Committee.

“Number one, I didn’t know that he made a contribution, and number two, I didn’t know he was lobbying for the Saudis,” Inhofe told Al-Monitor about McKeon’s donation.

Federal law prohibits former lawmakers from using campaign funds for “personal use.” But whether — and to what extent — for-profit lobbying qualifies is a gray area.

“Surprisingly, these same-day contributions are perfectly legal and do not violate any current campaign finance laws,” Lydia Dennett, a foreign lobbying investigator with the Project on Government Oversight, told Al-Monitor. “When lobbyists make contributions on the same day that they meet with lawmakers on behalf of their foreign clients, it certainly gives the appearance of a quid pro quo relationship.”

But there is a movement afoot to bar ex-lawmakers and former candidates from using leftover campaign funds to lobby. The nonpartisan Campaign Legal Center is petitioning the Federal Election Commission (FEC) to amend regulations to bar politicians from using personal campaign funds for lobbying and other expenses.

“After receiving our petition, the FEC announced in April that it will begin reviewing campaign disclosure reports to determine whether former candidates and officeholders are illegally using leftover campaign money for personal purposes,” Corey Goldstone, a spokesman for the Campaign Legal Center, told Al-Monitor.

A 2014 Project on Government Oversight report points to numerous instances of lobbyists making contributions to lawmakers on behalf of their foreign clients, including in the Middle East.

And while lobbyists can make campaign contributions in the hopes of securing face time with lawmakers and their offices, Dennett says that politicians such as Inhofe are often legitimately unaware of the contributions.

Dennett says that while lobbyists can intentionally time their donations to coincide with meetings, they may not always consciously be using the donation to advocate for their client.

“These are just individuals who are politically active, and they just sort of happen to be donating to the same people that they’re trying to influence,” said Dennett. “It’s just part of being in DC.”