Russian-born Anastasia Petrova Cetinkaya is running for mayor of Turkey's southern resort city of Alanya in a bid to better serve residents and strengthen the two countries' bilateral relations. 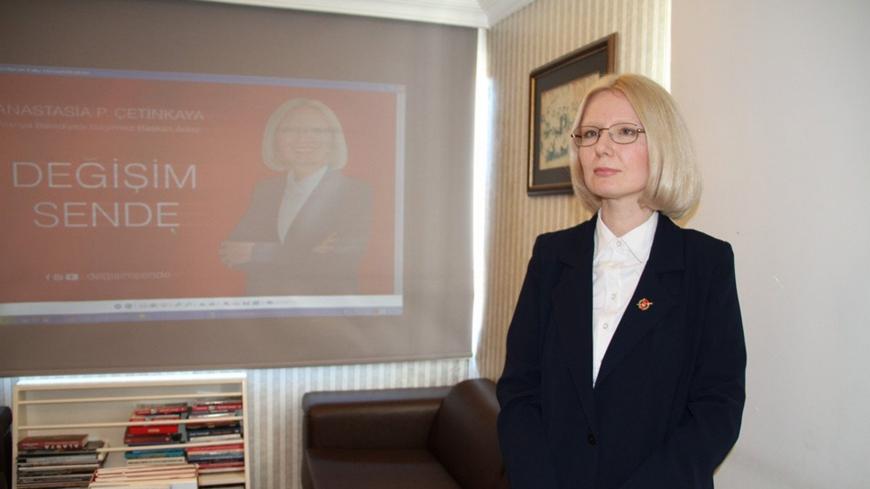 In a historic first, a Russian-born female is running for mayor of the Turkish resort city of Alanya.

“It has been a long road,” Anastasia Petrova Cetinkaya told Al-Monitor in explaining how she decided to run for mayor in the March 31 election. “Three years ago I got this idea. Two years ago I started to write my election program.”

Petrova Cetinkaya, 36, was born in Murmansk, a port city on the Barents Sea in the far northwestern part of Russia. She graduated from two universities — one in Murmansk and the other in Oslo, Norway, where she studied political science. After graduation, she returned to her hometown, where she worked for a while as a business development manager at a foreign company. In 2010 Petrova Cetinkaya moved to Turkey, where she and her Turkish husband are engaged in the printing, design and branding business. She speaks five languages — Russian, English, Norwegian, Turkish and French — studies Arabic and plans to master Chinese. Petrova Cetinkaya also writes for local newspapers.

Alanya is a resort city in Antalya province in Turkey’s Mediterranean region. More than 30,000 foreigners live there, including Germans, Russians, Ukrainians, Iranians and Iraqis, among others. Thus, being a candidate with foreign roots does not appear to be a problem for Petrova Cetinkaya. However, she says that first of all she is a Turkish citizen and that she would be elected as a Turkish citizen by other Turkish citizens. She promises to improve local people's lives and create new jobs.

Her program includes more than 40 proposed projects that seek to improve local citizens' living conditions, increase tourism and implement a number of infrastructure and environmental projects. The slogan of the election campaign is "Be the Change," which calls for, first of all, personal responsibility.

“We have no printed election brochures. Everyone asks why? I can explain. Every year billions of printed brochures are thrown away. It’s just useless garbage. So we decided not to do that. We are widely represented on social media. Everyone can easily find us there,” she told Al-Monitor.

Petrova Cetinkaya is campaigning as an independent candidate but doesn’t deny that in the future she could join some political party. However, at this point she prefers not to show her political sympathies.

Although the mayoral candidate says tourism is not a top priority of her campaign, she calls for dramatically increasing tourist flow to 6 million in the next five years. Currently around 2 million tourists come to the city annually.

For the last two years Alanya has been the most popular destination for Russian tourists who come to Turkey, according to Russia’s online service for finding and booking tours Travelata.ru. Daria Toropova, head of the client department of Travelata.ru, said Antalya's popularity can be explained by low cost.

“The prices are lower there as Alanya is the farthest resort from Antalya Airport. Another factor affecting pricing is that Alanya is not as green as other popular Turkish resorts — Kemer and Belek. As a result, 35% of all the tours sold last year were tours to Alanya. The main advantage of the resort is the southern location, so you can safely go there in April, and the season lasts in Alanya until late November,” Toropova told Al-Monitor.

In 2018, Turkey was the most popular foreign destination for Russian tourists, with visitor numbers rising 25%. According to Maya Lomidze, head of the Russian Association of Tour Operators, the overall Russian tourist flow grew 8% in 2018 compared with the previous year. Visa-free travel, short flights and an all-inclusive system are among the most important factors for Russian tourists when they choose their travel destination.

However, Petrova Cetinkaya told Al-Monitor that while the all-inclusive system is good, Alanya needs something new.

“We need to think big. It is important to distribute tourist flow rationally. We should attract more tourists not only from European Union countries, Russia or Ukraine but also from Asian countries, such as China, Japan, Singapore and others,” the mayoral candidate said. She added that Alanya is not popular among tourists from Asian countries.

Among her plans is the creation of a “Turkish village” — a touristic place where people could see what a traditional local village looks like. “It can be a center for winter and summer tourism,” Petrova Cetinkaya said.

She also wants to organize more festivals and other cultural events between Alanya and its 12 sister cities, most of which are in Europe.

Petrova Cetinkaya’s hometown of Murmansk is among the sister cities; due to her personal initiative, the two cities became twin towns in February 2014.

The candidate said her Russian origin is not an impediment but rather an advantage in the upcoming local elections given the current positive dynamics between Turkey and Russia. These include stable political and economic relations, cooperation on Syria, the two mega projects of the TurkStream gas pipeline and the Akkuyu nuclear power plant and personal chemistry between Presidents Recep Tayyip Erdogan and Vladimir Putin. Last year, the two leaders had seven one-on-one meetings and 18 phone calls to discuss bilateral relations and regional developments, especially the Syrian crisis.

Petrova Cetinkaya disagrees with the position that it is difficult for women to make their way in Turkish politics.

“It is a very silly stereotype about Turkey. Women are very welcomed in politics. Look at the last general and presidential elections. Meral Aksener and her party showed good results,” Petrova Cetinkaya said.

She said she loves Alanya with all her heart.

“I have been living in Alanya for nine years but still every time I go somewhere it opens something new for me here,” she said.