As the United States plans to withdraw from Syria, Russia considers all options available to settle conflict east of the Euphrates. 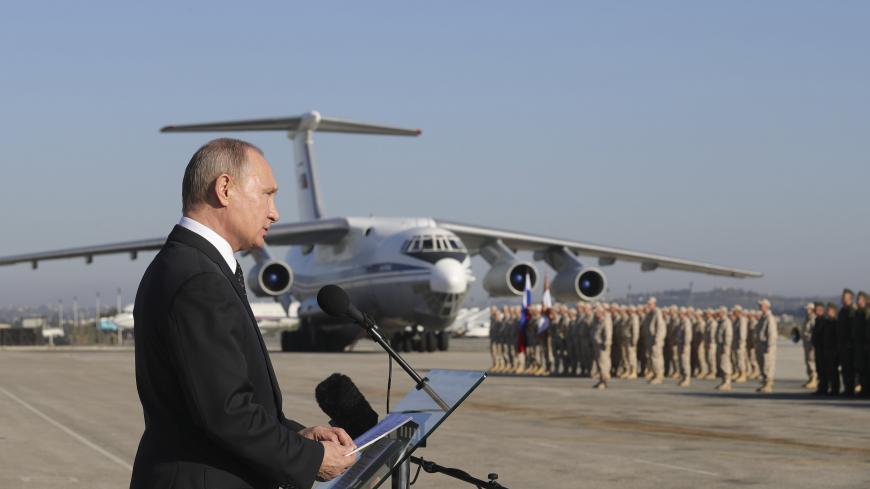 The usual pace of the fight for influence in eastern Syria was altered when Turkish President Recep Tayyip Erdogan raised the stakes and US President Donald Trump decided to withdraw US troops from the country shortly thereafter. Now, all interested sides have to demonstrate their ambitions once again and attempt to gain control over areas they seek to influence — in a brand-new configuration.

It is not clear how well Russia, Iran and Turkey were prepared for the announced withdrawal of US forces. Due to the possibility of a vacuum appearing, the Astana format guarantors of the resolution in Syria may face additional challenges and burdens in the geopolitical and economic realms. The void temporarily left in the trans-Euphrates region could potentially be settled by the active involvement of the Arab states that are interested in restraining Iranian and Turkish ambitions. Certain Russian experts cautiously point out that Russia may make a deal on this with the Gulf nations. This argument suggests that Riyadh and Abu Dhabi influenced the opposition in Syria's southwestern de-escalation zone in exchange for the restoration of diplomatic contacts with Damascus and Moscow’s permission to expand their presence in eastern Syria. Previously, Emirati and Saudi delegations repeatedly visited the areas controlled by the Syrian Democratic Forces (SDF).

As reported first by the Israeli website DEBKAfile and, later on, the Turkish daily Yeni Safak, representatives of security services from Egypt and UAE visited Manbij, a city claimed both by pro-regime and pro-Turkish forces. Both Egypt and the UAE believe that Ankara’s ambitions in the region should be restrained. Earlier, Cairo had refused to deploy its troops to Syria, preferring to provide a venue for the negotiations between the Syrian opposition and Russia within the Astana process. However, after Trump announced the withdrawal of American forces from Syria, Egyptians reportedly became mediators between Damascus and the Kurds.

Obviously, the contacts between security services and the limited forces from Arab countries deployed in Syria are unlikely to deter a potential Turkish assault. At most, these factors can guarantee that the SDF’s political project will survive and that its Arab component will be further consolidated after the government forces take over the area. Sources in the opposition claim that Russia has already suggested it will deploy military police on the east bank of Euphrates to block the advance of pro-Turkish troops farther into Syria.

Considering the obvious politicking with the Kurds and obscure prospects of stabilization in the region, keeping the border between Syria and Iraq secure becomes a priority. To accomplish this, military and counterintelligence methods alone will not suffice. It is also necessary to rebuild infrastructure in the areas where numerous Arab tribes, both large and small, live. Their own views have transformed substantially during the years under Islamic State (IS) control. Moreover, permanent poverty, destruction, involvement of pro-Iranian militants and the opening of “cultural centers” compel the communities to support radical structures.

Baghdad disproved the rumors about the US request to enter Syria and create a buffer zone, yet it didn’t rule out that IS' presence in eastern Syria may make Iraqi forces operate outside Iraq’s borders. For his part, Bashar al-Assad allowed Iraq to assault IS inside Syria without any prior approval by Damascus. This measure, along with the reports of the Iraqi president planning to visit Damascus, was used in Russian media to prove that the partnership between the two nations was strengthening. At the same time, Iraqi air forces and artillery previously attacked the terrorists inside Syria, coordinating their actions both with SDF and the four-sided counterrorism center, as explained below, in Baghdad.

Russia, Iran, Iraq and Syria cooperate within the so-called smaller counterterrorism coalition, which was technically created a year before its official launch in 2015, with its coordination center located in Baghdad. During the latest meeting in mid-December, intelligence officers of the member states discussed the situation in eastern Syria and in the area along the border with Iraq.

The information about the productivity of the coordination center’s work is quite scarce.

“We established the exchange of information on the militants from Russia and ex-USSR countries fighting in Syria and Iraq," Maj. Gen. Alexander Smolovoy, the head of the Russian side of the counterterrorism center in Baghdad, disclosed a while ago. "We detected the routes they had taken to arrive to the combat zone, the training camps and their funding sources."

However, Russia had supposedly failed to develop fully functioning counterterrorism structures in Iraq. As a result, Moscow focused on the ad hoc approach, solving issues such as the identification of Russian nationals fighting in Iraq and the deployment of special forces in the town of Abu Kamal near the border. Thus, even if this type of cooperation is suitable for the local counterterrorism effort, it is hardly efficient to eliminate developed Islamist networks. But these measures allow for diversification of logistic routes inside the so-called Shiite corridor between Iran and Lebanon.

In a parallel development, Ahmad al-Jarba, the leader of Syria's Tomorrow Movement, a political organization, and head of its militant wing, the Syrian Elite Forces (SEF), visited Turkey for negotiations and met Iraqi Kurdish security chief, Masrour Barzani. Jarba originates from the Shammar tribe, a clan closely connected to the UAE and Saudi Arabia. He also has friendly relations with the Barzani family and is consistent in his contacts with Russia. The SEF, which has repeatedly clashed with the SDF, opened its offices to recruit new members and published requirements for the servicemen.

According to media reports, the SEF, supported by regional actors, is able to control the border together with Rojava peshmerga, which has contacts with the Democratic Union Party and Syria’s Kurdish National Council. Some reports claim that SEF troops may also be deployed along the Syrian-Turkish border to prevent or minimize the consequences of Ankara’s new operation. However, no matter the outcome of these talks, Jarba’s political authority grows. He is supported across the region, although it has been repeatedly mentioned that military officials of Assad’s regime are highly skeptical of the SEF leader.

Eastern Syria, therefore, is currently an equation with numerous variables, where every actor aims to avoid getting stuck in the conflict but seeks to promote its own scenario, regardless of its tactical obligations to its allies. In this regard, the US departure from Syria is likely to become a fruitful measure by, first, allowing Washington to avoid the need to protect the SDF alliance that is crumbling due to the Kurdish-Arab controversy. Second, in this turn of events, the United States will retain its referee status if it continues to supervise the processes around Syria, fight IS and restrain Iranian influence, using facilities in Jordan and Iraq constructed specifically for these purposes. Russia, in turn, will also seek to establish itself as a mediator despite its clear bias and inability — bordering on unwillingness — to restrain Iranian influence.