The political outcry over settler youths arrested for causing the death of a Palestinian woman reflects the Israeli leadership's fear of the settlers’ political power. 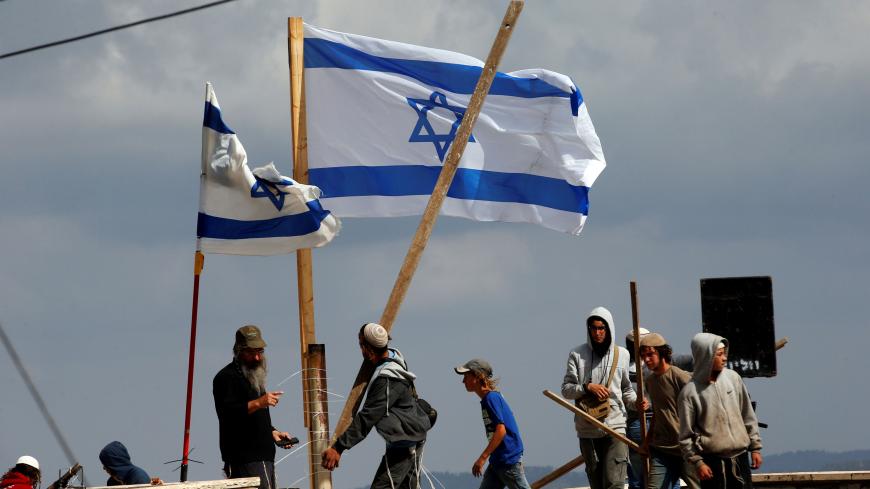 Protesters hold sticks as they stand on a roof during the evacuation of Jewish settler families from the outpost of Netiv Ha'avot in the occupied West Bank, June 12, 2018. - REUTERS/Ronen Zvulun

About 15 years ago, Idith Zertal and my fellow Al-Monitor columnist Akiva Eldar wrote “Lords of the Land.” In their in-depth book they investigated the settlement enterprise and showed how the settlers receive preferential treatment over the rest of the nation, delineating the perks and privileges they enjoy. Today the situation is even worse. The prime minister and political leaders are simply afraid of the settlers.

There were two dramatic events this past week: another evacuation of the Amona outpost in the West Bank (evacuated by court order in February 2017) and the arrest of Jewish teenagers on suspicion of terrorism. These events and their fallout show that the State of Israel has become the land of the settlers, and its elected leaders their servants.

In the 1999 elections, in which Benjamin Netanyahu lost to Ehud Barak, Netanyahu created the slogan “They are afraid," a contemptuous reference to Israeli media outlets and his critics. Now he himself is so afraid to lose the far-right settler votes that to appease them over Amona, he was willing to humiliate his military secretary, Brig. Gen. Avi Blot.

The small Amona outpost, north of Ramallah, has become notorious in Israel even though it was populated by a mere 40 families. In the years between its establishment and its 2017 evacuation and even after, right-wing Knesset members behaved like the Amona settlers' servants. They paid visits to the outpost to encourage the residents and went out of their way to compensate them for their “distress and anguish” in the forced evacuation.

The original Amona was built on private Palestinian land and after endless petitions, extensions and appeals, it was evacuated about two years ago. Following the evacuation, the government authorized a generous compensation package to the settlers to the tune of dozen of millions of shekels and decided to found a permanent, alternate locality named Amichai. Amichai was founded, but last month, a group of settlers returned to Amona in reaction to the shooting terror attacks near the Ofra settlement. When the Frontier Guard and police forcibly evacuated Amona once again Jan. 3, Netanyahu grew concerned for right-wing criticism and worried that the settlers might take revenge in the upcoming April 2019 elections. And so, Netanyahu blamed Blot (himself a resident of a settlement), accusing him of failing to relay the prime minister’s instruction to suspend the eviction in time. As a result, IDF Chief of Staff Gadi Eizenkot officially reprimanded Blot.

This is not the end of the groveling before the Lords of the Land. In the course of the evacuation, 23 policemen were injured, including a police officer who was stabbed in the hand with a sharp instrument. Some were sent to the hospital for treatment. Seven settlers were detained but immediately freed. None of them were brought before a judge for attacking and wounding policemen. As far as is known at this time, none of them have been indicted.

Recall the young Palestinian girl Ahed Tamimi, who was arrested, investigated, tried and sentenced to eight months in prison for slapping and kicking an Israeli soldier. Her lawyer’s requests for early release were refused on the grounds that Tamimi maintains an “extremist ideology.”

On Jan. 6, it was released for publication that five teens from the Pri Ha’Aretz yeshiva in Rechelim are under suspicion of causing the death of Aisha Rabi, a Palestinian resident of Biddya and mother of a large family in October 2018. Rabi was killed near Rechelim as a result of stone-throwing at the family car being driven by her husband. Only 24 hours after the incident, four prominent right-wing activists from the Yizhar settlement drove — violating the Sabbath — to Rechelim to prepare the yeshiva students to be cross-examined by members of the Shin Bet’s Jewish Department. It took the Shin Bet almost three months to arrest the perpetrators.

When the settler youths were first arrested, they were denied the opportunity to meet with a lawyer, just like Palestinian security detainees. In reaction, a whole campaign was orchestrated on their behalf. Justice Minister Ayelet Shaked, for example, spoke on the phone to the mother of one of the arrested teens who asked that her son be allowed to meet with a lawyer. Shaked told her that she talked to State Prosecutor Shai Nitzan twice, saying, "I relayed to him your cry and made the point clear to him." She added that she would do everything she could to help them. On Jan. 7 it was reported that Shaked also met in person with the parents.

True, the teens' culpability has not yet been proven, but the protests over the conditions of their arrest on suspicion of terrorism, complete with harsh verbal attacks on the Shin Bet, are unprecedented. “Every day stones are thrown at vehicles in Judea and Samaria and if you are wondering why you don’t hear about it, it’s because it is Palestinians stoning Jews,” tweeted Likud Knesset member Nava Boker. “But when Jewish youths are suspected of throwing stones, suddenly they experience KGB investigation methods. It would be better if the Shin Bet spent its time trying to prevent murderous Palestinian terror and not torturing Jewish boys.”

Last week, they were brought before the Magistrate Court in Rishon Lezion and the Central District Court in Lod to discuss the case. Rght-wing activists protested nearby and clashed with police. A demonstration in support of the detainees was held in Jerusalem with the participation of rabbis and senior members of the religious Zionist stream. Rabbi Ephraim Meir, a professor from Bar Ilan University, said at the demonstration, “Our wonderful hilltop youths, continue following your paths. You are the pioneers of the generation. We are not terrorists.”

Simultaneously, important Zionist figure Rabbi Haim Druckman published a video in which he argues to Netanyahu that the youths “are not terrorists” and that they should be investigated like anyone else in Israel, not interrogated by the Shin Bet.

Did Netanyahu back up the Shin Bet for its work in arresting Jewish perpetrators of terror? Has anyone among pro-settler HaBayit HaYehudi, the New Right party or the Likud supported the Shin Bet? So far, no, not even after the intelligence agency shared documentation of some of the youths destroying the Israeli flag.

This is the way things go when the prime minister and his ministers are servants instead of masters.