A group of rabbis supports settler youths suspected in causing the death of a Palestinian woman, instead of condemning their act and defending human rights and democracy. 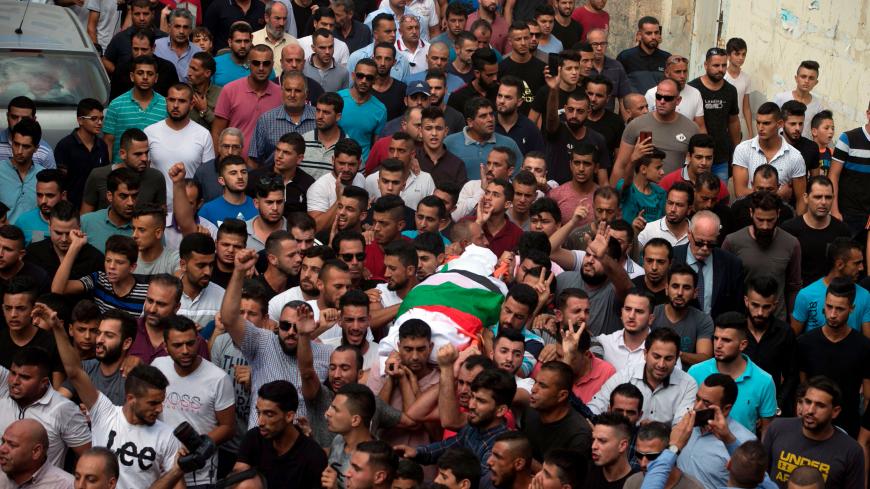 Palestinians carry the body of Aisha Rabi, who died after the car she was traveling in was hit by stones thrown by a group of Israeli settlers, during her funeral in Biddya, West Bank, Oct. 13, 2018. - JAAFAR ASHTIYEH/AFP/Getty Images

Agents of the Shin Bet security service have developed a particularly thick skin over the years. The Shin Bet generally ignores human rights activists who accuse it of torturing Palestinian detainees or issues a laconic denial, at most. Shin Bet usually does the same whenever a radical right-wing Jewish group accuses it of using outlawed methods to interrogate Jewish suspects.

On Jan. 6, however, the Shin Bet deviated from its practice, as it reacted to the right-wing outcry against the detention of five Jewish minors suspected of causing the death of Aisha Rabi, a Palestinian mother of eight from the West Bank village of Biddya. Rabi and her husband were attacked by a group of settlers who threw stones at their car. In a statement about the detention, the Shin Bet lashed out at the “deliberate and continuing effort by interested elements to denigrate the organization and its employees and delegitimize its activities.” Taking an unusually harsh tone, the organization said it conducts all its counterterrorism activity in accordance with the law and values of the state and it expects “condemnation” of those who malign it.

This should send shock waves through the country as this is not some one-off incident. It is a distress call by a key security agency tasked with protecting the State of Israel from a subversive organization that does not recognize the country’s laws and rules. According to official data, Israeli West Bank settlers and right-wing activists carried out 482 documented attacks against Palestinians in 2018 (up to mid-December), more than three times the 2017 figure. These include throwing stones, damaging homes and cars, cutting down trees and spraying graffiti. Israeli human rights activists operating in the West Bank claim this information is not complete because many incidents of harassment by thugs from Israeli outposts go unreported given Palestinian mistrust of the Israeli Police.

These very same assailants and their supporters are now crying foul at the arrest of several Israeli teens suspected of complicity in the rock throwing that killed Rabi. They are the ones to whom the Shin Bet was referring in demanding that its critics be condemned. Obviously, the organization expected that its direct boss, Prime Minister Benjamin Netanyahu, would rush to its defense. However, it took Netanyahu two days to issue a half-hearted defense of the organization — and then only because he had no choice in light of its success in hunting down and killing a wanted Palestinian terrorist.

“It [the Shin Bet] does its work with professionalism and dedication. There is no place for attacks on it,” Netanyahu said Jan. 8.

It is easy to guess how Netanyahu would have slandered the Arab minority if minors from the Israeli Arab village of Kfar Kassem, for example, were suspected of killing a Jewish woman. Suffice it to recall what Netanyahu said after a January 2016 terror attack by an Arab Israeli in Tel Aviv. “I will not accept two nations within Israel: a lawful nation for all its citizens and a [second] nation within a nation for some of its citizens, in pockets of lawlessness,” he said, speaking at the scene of the attack.

On Jan. 3, upon his return from Brazil, a jet-lagged Netanyahu was quick to demand that Israel Defense Forces Chief of Staff Lt. Gen. Gadi Eizenkot reprimand the prime minister’s military secretary, Brig. Gen. Avi Blot, for the delay in conveying Netanyahu’s instructions to the army to stop the evacuation of the outlawed settler outpost of Amona. Netanyahu does not seem to have visited the 23 members of the security forces injured in clashes with the settlers opposing their evacuation, and he did not comment on the violence in this “pocket of lawlessness” whose residents are allowed free rein.

Justice Minister Ayelet Shaked cannot afford to lag behind the prime minister in the campaign for the hearts and minds of the Jewish lawbreakers. She took time off from the election campaign of her fledgling New Right party for a phone call with the mother of one of the teen suspects; she then met with the parents. The minister said on the phone that she had spoken twice with the state prosecutor about the youths. “I relayed to him your cry and made the point clear to him,” Shaked told the mother.

A Jewish law opinion issued by a group of rabbis after the death of Rabi reveals the side taken by the prime minister, the defense minister, the justice minister and their supporters in the rearguard battle to save Israel’s democratic values and its Jewish image as envisioned in the Declaration of Independence. Traveling on the Sabbath by car violates Jewish laws and is not permitted under almost any circumstances, unless someone’s life is in danger. Still, well-known rabbis justified a decision by right-wing activists to desecrate the Sabbath by driving to Rehelim yeshiva in the West Bank on the day following the attack on Rabi. The activists assessed that the Shin Bet would arrest students from that yeshiva over Rabi’s death, and went there to coach the youths on dealing with Shin Bet interrogators.

To cover for the youths suspected of violating the “Thou shall not kill” commandment (Exodus 20:13), Rabbi Dov Lior, one of the leaders of religious Zionism, Rabbi Yehoshua Schmidt of the settlement of Shavei Shomron and the head of the Bircas Hatorah yeshiva gave a post-factum blessing to violation of another commandment — “Remember the Sabbath day, to keep it holy” (Exodus 20:8). Over the centuries, Jews gave up their lives in order to abide by the Sabbath commandment, mindful of the biblical injunction that “Everyone who profanes it must surely be put to death. Whoever does work on that day must be cut off from his people” (Exodus 31:14).

These “rabbis” — like the ones who decreed that Prime Minister Yitzhak Rabin was fair game for assassination because he was willing to cede parts of the biblical Land of Israel to the Palestinians — should be qualified as “villains in the service of the Torah." In other words, these are people who misleadingly and incorrectly use Jewish law to justify their villain deeds. But some rabbis reacted to that. Consequently, Rabbis for Human Rights announced that it was considering taking the rabbis to a religious arbitration court.

In fact, Rabbis for Human Rights made the correct distinction between moral and human rights on the one hand, and preventing injustice on the other. On the detention of the settler youths, the group rejected the use of any illegitimate methods of interrogation and the blocking of the right to meet with an attorney, the same way it criticizes the countless violations of rights that Palestinian suspects suffer.

The country’s political and judicial leadership, on the other hand, is burying its head in the ballot box. Ignoring this situation enables the Israeli leadership to ignore the vile statements excoriating the state and its laws, made in broad daylight in the outposts of the radical right zealots. These zealots are growing in number, growing in power, growing in extremism. They are, to paraphrase the Jewish sages, “Villains in the service of the authorities.” It will not be long before this monster rises up against its creators.