Knesset member Benny Begin has long been the emblem of political honesty and integrity; now he must raise his voice against Prime Minister Benjamin Netanyahu's continued rule while suspected of corruption. 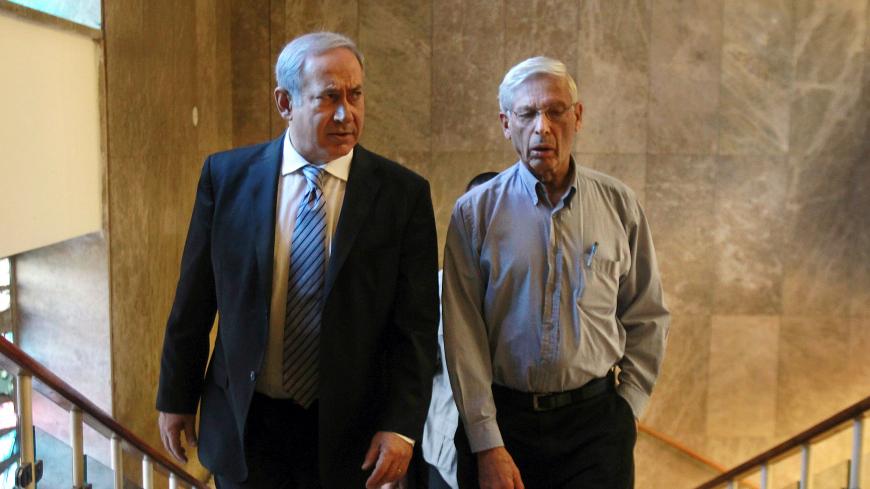 As of now, the 20th Knesset will not go down as Likud Knesset member Benny Begin’s greatest hour. At age 76, he will not be looking to serve another term in the next Knesset either. He arrived in the current Knesset on the shoulders of Prime Minister Benjamin Netanyahu, who reserved the 11th slot in the party list for him so Begin could avoid the ordeal by fire that is the party primary system. When Netanyahu formed the current government, he appointed Begin as minister without portfolio, a position Begin held for 17 days. Then, suddenly, he was forced to resign so that Gilad Erdan could join the Cabinet.

Benny Begin served in the larger-than-life shadow of his father, the late Prime Minister Menachem Begin. Benny Begin filled various minor ministerial positions and was liked by all, though he did not particularly stick out among his peers. He combined an extremist ideology, which rejected any partition of the land no matter what the cost, with a liberal attitude, which opposed any discrimination against minorities, and which respected human rights.

During his political career, Begin sometimes found himself in absurd circumstances. That is what happened in 1999, when he was part of the hard-line National Union list with Minister Rehavam Ze’evi, who advocated for the transfer of the Arab population. Begin even ran a failed campaign for prime minister. On the other hand, Begin was admired throughout his long political career for his honesty and integrity. He was never afraid to speak his truth, even if doing so put his political standing at risk. It was because of this that he came to be considered the “conscience of the Likud.” He opposed the Regularization Law, which allowed the retroactive confiscation of privately held Arab lands to build West Bank settlements (he called it the Robbery Law), and the Nationality Law in its current iteration and proposed his own version of it. While his version was completely unnecessary, it would not have caused as much harm to Israel’s non-Jewish minorities. Begin was the only voice in the Likud who spoke out against the various populist and criminal tendencies in his party, and he continued to do so even after he was removed from the Knesset’s Internal Affairs Committee just so that he would not vote against the Likud’s positions.

With just three months to the election, this should be Begin’s big moment. It’s up to him to make sure that he’s heard loud and clear about what is happening in Israel right now. He must speak up against a prime minister, who refuses to resign, even though the police have called for his indictment for three separate cases of bribery, and who is using the official tools at his disposal to try to prevent the inevitable.

Netanyahu is a cynical man who bases his decisions on pure pragmatism. Over the years, he has learned caution. He now thinks twice before making decisions. He will no longer be caught making mistakes like the opening of the Western Wall tunnel in September 1996, which immediately led to the deaths of 17 Israelis and about 100 Palestinians. The thing is that when the decisions affect him directly, he often loses all sense of better judgment and discretion. In many cases, he causes himself harm, as he did in 1993, when he shared details about his extramarital affair with the entire Israeli public, while accusing his political rivals in the Likud of plotting to release a videocassette of that affair. That cassette has never been found, nor did the police ever find the people allegedly involved in the whole sordid incident.

In 2008, Netanyahu actually called on Prime Minister Ehud Olmert to resign when Olmert was under police investigation. But things are very different when Netanyahu himself is the subject of the investigation. He is inclined to take full advantage of the Israeli law code, which allows a prime minister to remain in office until he is convicted in court. He exploits the fact that the Israeli media pays closer attention to the prime minister’s every utterance than it does to anyone else in the country and uses that to lash out at the police and the prosecutor's office, accusing them of all sorts of chicanery. This, he hopes, will bolster public support for him and dissuade the attorney general from announcing before the election that Netanyahu has been indicted, subject to a special hearing given to ministers before the final indictment decision. Netanyahu wants any such announcement to be held off until after the election.

Until only recently, Netanyahu believed that the response he repeated after every police investigation and every decision about his case — “There will be nothing, because there is nothing” — was enough to convince the public that he was facing false accusations and that there would be no indictment. Now, however, it is obvious to everyone that the indictments are right around the corner. Instead of ignoring them and focusing on real issues, Netanyahu has concluded that focusing on the recommendations to indict him would actually play in his favor and win him public support in his struggle against everything the “gatekeepers” have in store for him. He is following in the footsteps of Shas leader Aryeh Deri, who, in 1999, was found guilty of receiving a bribe. Deri responded by presenting himself as the victim of the system, which he accused of casting aspersions on him through no fault of his own. The creation of the Sha’agat Aryeh yeshiva (literally, the “Lion’s Roar” yeshiva) right outside the prison where he served his sentence and the widespread use of the slogan “He’s innocent!” only boosted his party’s popularity. It won 17 seats in that year’s election even though its leader was in prison.

But any attempt by the prime minister and leader of the ruling party to imitate Deri is a big problem. It completely ignores the severity of the damage that it would cause to the police, the state prosecutors, the attorney general and the entire judicial branch of government. Netanyahu is acting like an injured animal who will do everything to avoid prison time, even if it means destroying the very foundations of the rule of law. His ministers all justify his behavior and act as if they are reading from a list of talking points put out by his office every day. Or they say nothing at all. Not one of them was critical of the disturbing farce that was Netanyahu's appearance on all TV stations Jan. 7, just to say that his request to confront state witnesses in his case had been turned down.

Begin has already proved that he has no qualms about standing up to the Likud consensus or even to Netanyahu himself. Now that he is about to exit the political arena, this could be his big moment. He could call on Netanyahu to announce that he can no longer function in office and demand that he clear the way for someone else from their party to take over. It would be just like late Prime Minister Yitzhak Rabin did in 1977, after he was suspected of committing a crime (owning a dollar account abroad — which does not constitute a crime in Israel any more). Back then, Rabin announced that he could no longer function in office and transferred the reins of power to Shimon Peres.