The public opinion battle of Prime Minister Benjamin Netanyahu against a possible indictment continues, with his associates publishing photos of four journalists on a billboard, accusing them of persecuting the prime minister. 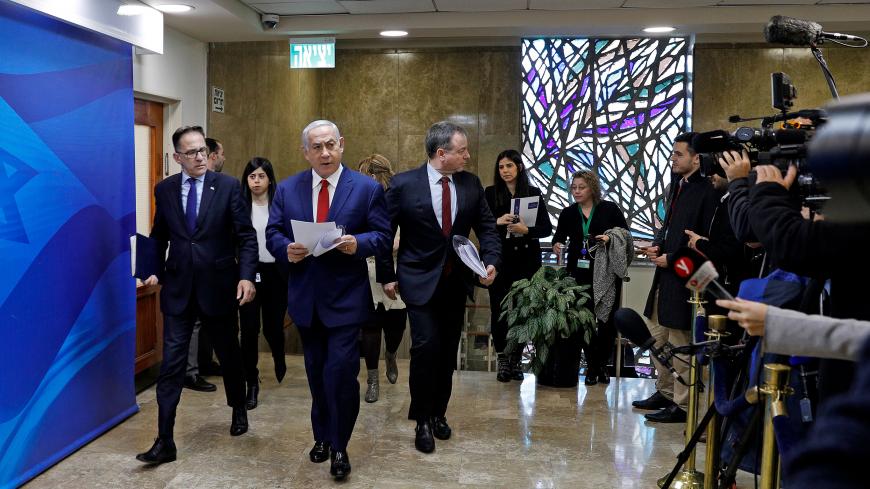 Prime Minister Benjamin Netanyahu’s right-wing government has managed to fracture the two foundations of any democracy: an independent judiciary and a free press. The prime minister’s re-election campaign proves he is now targeting both for total annihilation. Helping him is Justice Minister Ayelet Shaked, who prides herself on having wrought a revolution in the Israeli judicial system and wants to see it through to the end.

On Jan. 18, given increasing indications that Attorney General Avichai Mandelblit is likely to indict Netanyahu on corruption charges before the April 9 elections, pending a hearing, a giant billboard went up in Tel Aviv with the portraits of four leading Israeli journalists and the caption, “They will not decide.”

Two days later, Netanyahu posted the four portraits on his Facebook page, writing, “They will not decide. You will decide.” The journalists include Al-Monitor colleague Ben Caspit, author of a critical biography of Netanyahu published in 2018, and Raviv Drucker, who has exposed alleged corruption — including malfeasance at Netanyahu's residences, gifts he received and Israel’s purchase of German submarines — that led to police investigations. Also on the billboard is journalist and analyst Amnon Abramovich, who is often critical of Netanyahu and his circle, and television reporter Guy Peleg, who aired transcripts of conversations between Netanyahu and Yedioth Ahronoth publisher Arnon Mozes, which are at the center of File 2000, involving a suspected quid pro quo in return for favorable coverage. By posting the photos on his Facebook, Netanyahu declared open season on the journalists and, in general, the media.

A day before, Netanyahu posted a short clip that opens: “For 3 years, the left and the media have been persecuting the attorney general to force him to indict me at all costs." The words “3 years” and “all costs” are colored red, with the graphic design strongly suggesting that the left and the media are spilling Netanyahu’s blood.

Much has been written about Netanyahu’s obsession with silencing the media. He does not even try to hide it. In 2017, Netanyahu admitted that he had brought forward the 2015 elections to scuttle legislation that would have harmed Israel Hayom, the free newspaper published by his patron, American billionaire Sheldon Adelson, which regularly extols the prime minister and his government. The daily has become the country’s most popular and widely distributed newspaper, gravely damaging Israel’s print media.

Israel’s print and electronic media have been fighting for their lives over the past two years. Last week, two major commercial television channels merged in a bid to survive. At the same time, the media have exposed the affair involving Netanyahu and Mozes and another affair, dubbed File 4000, in which Netanyahu is suspected of granting regulatory favors to media tycoon Shaul Elovich, also in return for favorable coverage on Elovich’s Walla website. Police have questioned Netanyahu and recommended to the state prosecution that he be indicted on bribery charges.

After winning the 2015 elections and “saving” Israel Hayom, Netanyahu appointed himself minister of communications, in addition to his post as prime minister. In his new position, he strove to complete the “media revolution” he had planned, but journalist Gidi Weitz, among others, thwarted his plans in an October 2015 expose of the links between Netanyahu and the popular Walla site, which eventually became File 4000.

The Netanyahu heading into the coming elections is a worried and battered prime minister. This time, there is no repeat of his previous “Strong on Hamas” slogan. He also appears to have abandoned the use of the Iranian threat as a cudgel in his campaign, which is shaping up as the most fraught since he was first elected in 1996. At the time, he defeated acting Prime Minister Shimon Peres by demonizing him with the slogan “Peres will divide Jerusalem.” In 2019, Netanyahu’s “enemies” are the left and the media (which he regards as the same).

During his many years in power, Netanyahu has succeeded in convincing many Israelis that leftists are despicable enemies verging on traitors. His emissary and confidant, former coalition whip, Knesset member David Bitan, went as far as to claim on Jan. 20 that support for the left is not a legitimate stance. Now, all Netanyahu has to do is thoroughly discredit the liberals’ "partners," the media. If he is re-elected, Netanyahu appears likely to thumb his nose at all the curbs and the criminal investigations against him until he puts down the last watchdog of Israeli democracy. For now, it seems, he is focused on a more modest goal, turning his four “enemies” into fair game for his supporters, assisted by unnamed associates who plastered the faces of the journalists on a billboard painted in bold colors. (The billboard was not signed.)

Justice Minister Shaked, his coalition partner, has also opted for war and revolution. Shaked, like Netanyahu, did not blur her declaration of war against the country’s legal system. During her four-year tenure, the Judicial Appointments Committee that she chairs has named 334 new judges and registrars, including six new Supreme Court justices. “I have fractured the basic concept of the legal system,” she said on Jan. 8, adding that she prioritizes the appointment of conservative judges — a euphemism for judges whose views are palatable to the political right.

During her tenure, Shaked stripped the Supreme Court of its authority to adjudicate petitions against the state’s appropriation of Palestinian lands in the West Bank, handing it instead to the Jerusalem District Court, some of whose judges are more attentive to the West Bank settlers. One obvious outcome of her strategy was the controversial and precedent-setting ruling by Jerusalem District Judge Arnon Darel in August 2018 that settler outposts built illegally on private Palestinian land could be legalized if the land was given to the settlers “in good faith.”

Shaked is now vulnerable over the entanglement of her ally on the appointments committee, the former chair of the Israel Bar Association, Efi Naveh, in an affair dubbed the “sex for appointments” scandal. However, she has marked her next target: another term as justice minister. Her party co-chair Naftali Bennett is fully on board with her goal: “Make no mistake. Ayelet Shaked is not made of fragile material. Ayelet Shaked’s revolution of the judiciary system will not be stopped.”

Netanyahu and Shaked are now promising voters that the next right-wing government elected on April 9 will complete the revolution in the media and judicial system. This is also likely to be the fate of Israeli democracy.