Who's afraid of a free Israeli press? 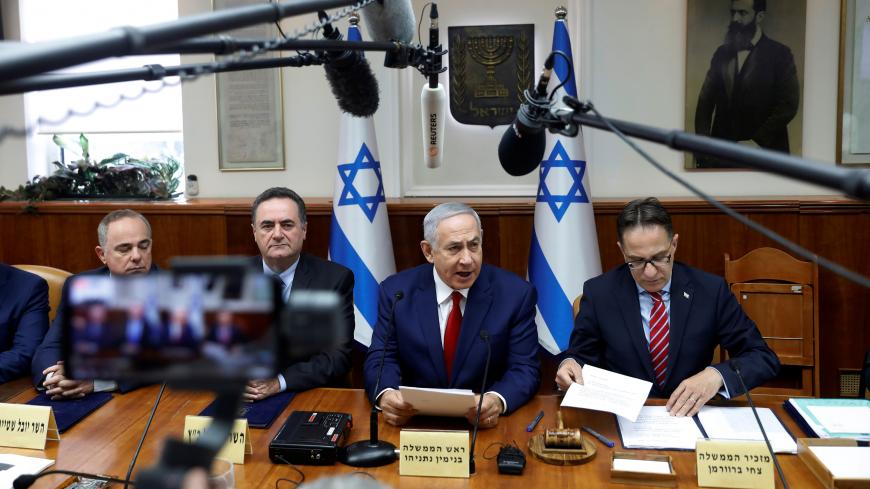 “Israel’s foreign relations are flourishing and have hit an unprecedented … all-time record,” boasted Prime Minister Benjamin Netanyahu at a Dec. 17 meeting of his Likud party’s Knesset members. “We have tremendous accomplishments [from] around the world, including the Arab world, which we never had before,” bragged Foreign Minister Netanyahu. “We are protecting Israel as an island of calm,” continued Defense Minister Netanyahu in the same vein. Netanyahu's remarks were prominently reported the following day by Israel Hayom, the newspaper owned by the family of American casino mogul Sheldon Adelson and distributed free on every street corner in Israel.

Given all this, how is it possible that 52% of Israelis do not want such a successful prime, foreign and defense minister to lead them for another four-year term, as revealed a Hadashot TV poll conducted Dec. 25? How does one explain the fact that only 37% of the public thinks that such an outstanding leader is fit to rule them, as found a poll conducted the same day by Kan TV, Israel’s public broadcaster? Who are the mean-spirited people turning the public against a man who dedicates his life to defending them and also against his party even as a Dec. 25 Channel 10 poll gives the Likud 30 Knesset seats?

Judging by Netanyahu’s past statements, the list of usual suspects certainly includes the American Hungarian liberal billionaire George Soros and the New Israel Fund, left-wing Israeli organizations, the European Union, jurists and purists. Topping the list are the media.

The media — print and online newspapers, television and radio — have plotted, Netanyahu claims, to mislead the public. They have joined forces to conceal from Israelis the abundance endowed upon them by Netanyahu and his wife, Sara, and turned them against the couple with tall tales of non-existent corruption. This will probably be the Likud party’s primary narrative in the upcoming election campaign.

Netanyahu treated members of the Likud’s Knesset faction to generous helpings of this murky stew at their Dec. 17 meeting. Netanyahu waxed poetic about his travels to international summits and how his listeners would “not hear a word about it in the press.” Netanyahu said that 300 foreign dignitaries — prime ministers, presidents, foreign ministers, senators, leading lawmakers — visit Israel every year.

“It’s a flood. How much does one hear about it? Have you heard of Japan? Sure, if a shoe is placed on the table,” said Netanyahu, referring to an unusual desert in the shape of a shoe served at an official May 2 dinner for visiting Japanese Prime Minister Shinzo Abe. “It takes a shoe on the table for you to hear that it was Prime Minister Abe’s second visit to Israel and that Japanese investments in Israel have increased over a thousand fold,’’ Netanyahu added.

Netanyahu complained about “several journalists” who “criticized and slandered” the Dec. 10 visit by “my wife, Sara” to Guatemala, a visit that made a “significant contribution” to Israel’s public diplomacy. “And what did you hear here?” Netanyahu whined to his adherents. “Zilch. Almost zero.”

Netanyahu not only moaned about the media ignoring his and his wife’s diplomatic achievements, but also knew in advance that the media would conceal from the Israeli public his visit to Brazil, scheduled to begin Dec. 27. “The media ignores us,” Netanyahu said, summing up the diatribe against his imaginary enemy.

After a similar complaint in 2016, the veteran Israeli journalist Dan Shilon said, “I can attest from the pinnacle of my experience that never was there a prime minister treated so well by so much media. He has his own newspaper [i.e., Israel Hayom], he has television and radio channels that for the most part do his bidding.” Indeed, most of the media devote considerable coverage to Netanyahu’s journeys and meetings with VIPs.

After listing the sins of the media at great length and denouncing its blatant disregard of his accomplishments, the politician who spends his time delegitimizing journalists who refuse to toe the line ended his by saying, “And we ignore the media.” Interesting. Is that what he told the police working Case 4000 who heard dozens of taped conversations of Netanyahu demanding favorable coverage by the Walla news site from Shaul Elovitch, the sites biggest stakeholder?

To underscore Netanyahu's “we ignore the media” declaration, one should also recall his phone conversation with the publisher of Yedioth Ahronoth, Arnon Mozes, part of Case 2000, the investigation into whether Netanyahu conspired with Mozes for favorable coverage. Then there was Netanyahu’s 2014 decision to dismantle his previous government over a proposed bill curtailing the free distribution of the pro-Netanyahu freebie newspaper.

Less than a week after blasting the media, Netanyahu announced that he had decided to sue our colleague Ben Caspit over a news item he had written for Maariv. Netanyahu and his wife, who “ignore the media,” have since his first term (1996-1999) filed at least seven libel suits against journalists and media outlets totaling some NIS10 million ($2.65 million). Most of the suits were dismissed or resolved without compensation being paid, but media researchers have found that such tactics are generally effective in muzzling the media and in certain cases taking out rivals. Netanyahu had a good mentor in this regard. In 2012, Adelson had filed a $60 million libel lawsuit against the National Jewish Democratic Council, and although the courts dismissed the case, it almost led to the organization’s collapse.

On Dec. 26, Netanyahu told settler leaders, “In the next elections we will see an attempt by the left to overrule the government by mobilizing the media and other entities,’’ clearly suggesting an alleged conspiracy by the press, the police and state prosecutor's office to topple the incumbent prime minister.

In addition to trying to erode the influence of traditional journalism on voters by delegitimizing journalists who refuse to toe the line, Netanyahu is also intensifying his penetration of every Israeli household through social media. He reportedly ordered Justice Minister Ayelet Shaked and the chair of the Knesset’s Constitution, Law and Justice Committee, Nissan Slominski, to suspend all work on election campaign reform that would require identifying the candidates and political parties or other organizations paying for campaign ads on television, radio and the internet. Current law only requires such information for election ads in newspapers. Netanyahu said he wanted “to study” the proposed law, although he himself is a leading expert on how to exploit commenters and opinion columnists.

As was the case in the 2015 elections, in the elections scheduled for April 9, 2019, Israelis will have to choose between occupation and peace, between freedom of religion and rule by rabbis, and between liberal democracy and nationalist conservatism. In addition, they will have to choose between a regime that encourages a combative, independent media and one that turns the media into a disciplined propaganda tool.