Prime Minister Benjamin Netanyahu's overhyped TV address failed to impress a million viewers and betrayed his fear of being indicted before the April elections. 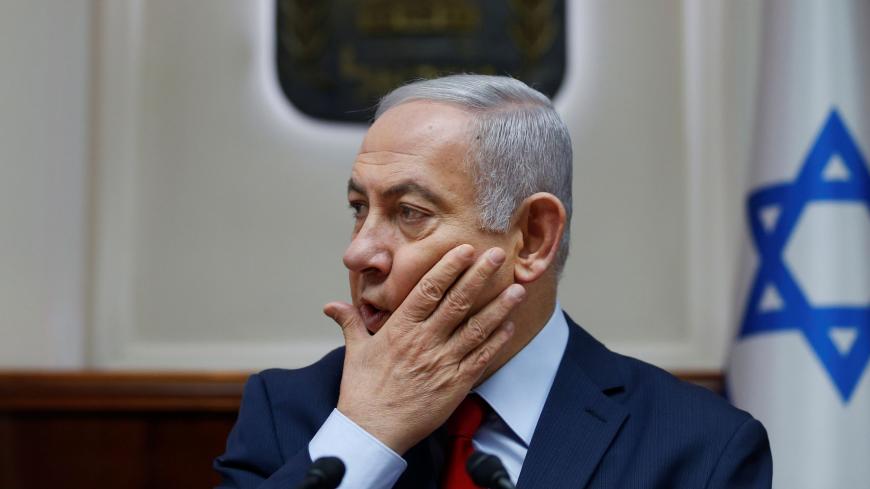 Even Prime Minister Benjamin Netanyahu’s sworn followers are beginning to wonder if he has begun to lose it. Netanyahu’s people promised a "dramatic announcement" on primetime TV, but his appearance on the evening of Jan. 7 was far from it and very far from what he usually delivers.

Netanyahu is one of the best orators in the history of Israeli politics who knows how to steal the show with magnetic and impressive performances. On Monday evening he did just the opposite: This was a pale, unconvincing, frightened Netanyahu who looked like a trapped animal surrounded by hunters. Still, it is possible that it was precisely the impression that Netanyahu wanted to make. He knows how to manipulate his constituents' emotions and motivate them to try to save him; as he did on the eve of the last elections in March 2015.

“It was the appearance of someone who finally put two and two together, who suddenly understood that he lost control over his situation and his fate,” said a senior Israeli political figure who was loyal to Netanyahu for a long time, adding to Al-Monitor on condition of anonymity, “Evidently he understood that the attorney general is really going to indict him and announce his decision even before elections.”

Netanyahu made a number of mistakes on the way to the appearance. They began at five p.m., when his office spread the word that the prime minister would deliver “a dramatic announcement” at eight p.m. In Israel, that kind of buildup can cause panic and sweep an entire country with crazy rumors. This is exactly what happened on Monday afternoon. As the clock ticked closer to eight, Netanyahu’s people understood the terrible mistake they had made and tried to lighten the atmosphere. It's nothing so dramatic, Netanyahu’s associates began to leak to the media, calm down. But it was too little, too late.

One minute after Netanyahu began to talk, it was clear that all the drama had been unwarranted. He did not announce peace, declare war or reveal a new existential threat. He presented no achievement in the battle against Iranian nuclearization. Instead, he faced the camera to complain about the way he was treated in the investigations and to demand the right to confront the men who turned state’s witness against him. He even suggested that the face-to-face meetings be broadcast live.

“He lost touch with reality,” one of Netanyahu’s ministers told Al-Monitor on condition of anonymity after the broadcast. “He thinks this is a reality show and that he is the director.”

The state recruited three witnesses from Netanyahu's sworn confidants: Ari Harow, a former top aide and chief of staff; Shlomo Filber, former media adviser and Communications Ministry director; and Nir Hefetz, former adviser and spin artist of the Netanyahu family. Netanyahu ignored the fact that confrontations between accusers and accused are a tool used at the prerogative of investigators and not a right of the person under investigation. He appeared before a million viewers, a very high number for Israel, and again tried to subvert the investigations. As usual, Netanyahu presented himself as a martyr, an eternal underdog who is persecuted by mysterious forces who want to destroy the State of Israel. This time, it seems, he was not successful.

The polls taken after Netanyahu’s appearance revealed that a significant majority of the general public does not believe his version of events or his claims that the proceedings against him are unfair. On the other hand, Netanyahu reaped success among Likud voters, his base, and got them to close ranks. A large majority of them believes him and swallows his version as absolute truth. Still, this limited achievement might not be sufficient for his political survival.

According to one of Netanyahu’s associates who spoke on condition of anonymity, the prime minister’s watershed moment in understanding the depth of his predicament was when Attorney General Avichai Mandelblit convened a meeting with his predecessors and with former state attorneys. The meeting took place in the Cramin hotel in Kiryat Anavim, where Mandelblit asked the attendees for their opinions regarding publicizing a decision to put Netanyahu on trial before the elections. Attendants included legal icons like Aharon Barak and Meir Shamgar, two former Supreme Court justices, and former legal advisers Elyakim Rubinstein, Dorit Beinish, Meni Mazuz and Asher Grunis. Their consensus was decisive and clear: The legal decision must not be delayed. Should the attorney general reach a decision before the elections, he must disseminate it immediately.

Netanyahu suddenly understood that he stands to lose the race he started just two weeks ago, when he brought the election date forward, between Mandelblit's announcement and the election. Netanyahu examined surveys that probed the influence of an indictment before the elections and concluded its political impact could be lethal. We’re not talking only about the election results — Netanyahu knows that even if he wins the elections after such an announcement, he would have a hard time assembling a coalition. He would need a miracle that would heighten the power of the far-right and ultra-Orthodox parties to give him a majority, with partners willing to serve under a prime minister who is struggling to prove his innocence in court. It is unclear whether other potential partners would enter a coalition under such circumstances. Even for Netanyahu, that miracle is likely unattainable. He also understands that he is fighting not only for his political life, but for his freedom. This insight is what made him look the way he did on Monday night.

Two days later, a new survey was published and, for the first time, it seems that Netanyahu actually has a real political rival: When asked who is most appropriate to serve as the next premier, 41% of respondents said Netanyahu and 38% said former Chief of Staff Benny Gantz. The numbers are almost a statistical tie, and Netanyahu has not experienced anything like it in the last decade.

Despite all the above and the unprecedented drama, we must remember an important point: Netanyahu still enjoys a large lead in the polls. Even now, when his situation seems hopeless, it is too early to eulogize the man.