For the time being, the indictment of Sara Netanyahu for fraud and breach of trust has not damaged the popularity of her husband, Prime Minister Benjamin Netanyahu, among Israelis. 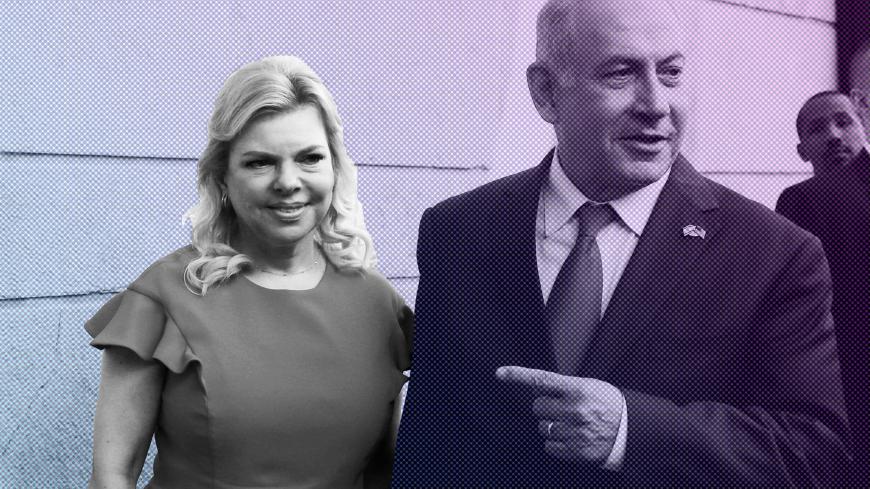 Israeli Prime Minister Benjamin Netanyahu and his wife, Sara, stand outside the US Embassy, Jerusalem, May 14, 2018. - REUTERS/Ronen Zvulun

The shoe finally dropped on June 21. Israeli prosecutors filed an indictment against Sara Netanyahu, the wife of Prime Minister Benjamin Netanyahu. The charge: fraud and breach of trust while exploiting her position as wife of the prime minister. It is alleged that all this went on for more than two and a half years in the prime minister’s official residence in Jerusalem.

Almost 20 years have elapsed since the first criminal investigation was opened into Benjamin Netanyahu (2000). Now, an indictment has been filed for the first time against a member of the family that has ruled Israel for almost a full decade. It comes after an endless series of investigations and testimony from around the world (including Australia, the United States, Europe and elsewhere), the recruitment of state’s witnesses and much indecision. True, Sara Netanyahu is not Israel’s prime minister, but anyone familiar with the goings-on in the official residence knows that she is a full partner in the ruling enterprise. She has great influence on her husband, managing his life around the clock. Anyone who harms her, harms her husband.

Over the years, Benjamin Netanyahu has devoted tremendous amounts of energy to “keep the lady happy,” as Netanyahu’s inner circle describes it. According to a political source speaking on the condition of anonymity, whenever something happens that insults or hurts his wife, Netanyahu feels undermined and loses his equilibrium.

“We are one,” Netanyahu tells anyone asking why he continues to identify with and back up his spouse. This is not only with regard to investigations into her, but also the way that national decisions are made in his office. Anyone who does not fully accept that the first lady is in charge of her husband, is immediately distanced from the prime minister’s environs. Now, the first lady is involved in a criminal court case, and Netanyahu’s people have locked their sights on the police investigators, the attorney general and, of course, the media.

Attorney General Avichai Mandelblit finally crossed the Rubicon after long and tiring negotiations, two hearings, supplementary hearings and additional testimony. After trying everything, he concluded he could not close the file without a trial. Mandelblit authorized the prosecution to issue a harsh indictment against Sara Netanyahu.

The indictment reveals the tip of an iceberg of alleged rampant corruption, most of which still remains under the radar from the time that Netanyahu and his spouse returned to the throne in 2009. Mandelblit had hoped and prayed until the very last minute that he could avoid the dangerous path to indictment. He had hoped for an official medical opinion that would declare the first lady unfit to stand trial due to her precarious “state of mind.” A hint of this had reached the ears of preceding Attorney General Yehuda Weinstein from attorney Yaakov Weinroth, an advocate of the first lady.

The Netanyahus did not, however, go along with this convenient solution. Sara is completely fit and healthy, they claim. Not only is she far from being psychologically disturbed, she is in fact a paragon of stability, refinement, sanity and modesty. It’s everyone else who is unstable. After Sara rejected an offer to close the file contingent on her paying a significant fine and receiving a minor criminal conviction, the attorney general understood that he had hit a brick wall.

“The State of Israel against Sara Netanyahu” is the title of the document submitted to the Jerusalem Magistrate’s Court detailing her ostensible misdeeds. This is the first time that the “Netanyahu” name has graced a document such as this, but evidently it won’t be the last. Mandelblit is inching his way toward making decisions on the much more complex investigative files of Sara's husband. His conclusions are expected sometime next year.

To what extent will Mandelblit’s decision to indict Sara Netanyahu affect his direction regarding allegations against her husband? The assessment is that Mandelblit has already undergone the baptism by fire and emotional turmoil that an indictment against one of the two would likely cause. Recall that Mandelblit had served as Netanyahu’s Cabinet secretary for four years, been a member of the prime minister’s most intimate coterie and had seen and experienced (sometimes personally) the antics of the family’s inner circle. In fact, for a considerable period of time, Mandelblit had been viewed by the Netanyahus as “one of us.”

Mandelblit had in 2015 asserted to the selection committee that authorized his nomination that he would not hesitate to open an investigation and file an indictment even against the prime minister. Nevertheless, when the time came, it was hard for Mandelblit, perhaps even very difficult indeed. He hesitated, was indecisive and postponed the decision to open an investigation against Netanyahu for many long months. Even after he gave the go-ahead, Mandelblit played for time and was outrageously slow with everything connected to the assorted investigative files now plaguing the prime minister.

Regarding Sara Netanyahu, Mandelblit had more luck. It was his predecessor, Weinstein, who issued the directive to investigate her, in the last months of Weinstein’s tenure, in July 2015. Weinstein, who had earlier served as the Netanyahus' personal lawyer and shielded them throughout his entire term in office, “broke” at the last minute. Weinstein instructed that an investigation begin of Sara regarding the “prime minister’s residence affair.” It took three years after the investigation began until the formulation of an indictment, even though a few newbie investigators and a young prosecutor would have finalized the same indictment in a mere few months. One way or another, the mental block was breached, and the indictment was filed. The barrier that had protected the Netanyahu couple from legal charges until now has been shattered, at least in the meanwhile.

Yet all of these events have not affected the tremendous popularity enjoyed by Benjamin Netanyahu among the Israeli public. His recent successes in the security and diplomacy spheres, his close, public alliance with President Donald Trump, and his considerable personal charisma have all helped the prime minister retain his steadfast position in the polls. This proves with every passing day that there is no alternative to Netanyahu with regard to national leadership.

Netanyahu is well-aware that the odds are that he will be indicted sometime next year, yet he is far from conceding defeat or accepting his fate. He scornfully rejects all suggestions of trying to make some kind of a deal with the attorney general, such as exiting political life in exchange for closing all the files against him and his wife. Netanyahu, true to his tradition and heritage, will fight to the end. He is determined to hold elections even before the indictment against him is filed, at the beginning or middle of next year. He wants to win by a large majority so he can signal to Mandelblit that the nation is with him despite all the witnesses, indictments, investigations and bad publicity against him.

When the time comes, if it comes, Mandelblit will have to decide whether Netanyahu can continue as prime minister while a suspect in a criminal case. If the attorney general hesitates, the High Court of Justice may have to decide. Such a scenario would, obviously, take the drama to new heights. Until then, Netanyahu is here to stay.