The news that Nechirvan Barzani will not continue as prime minister of the Kurdistan Regional Government in Iraq is causing Turkey to worry that the new KRG Cabinet will not be formed of allies of President Recep Tayyip Erdogan. 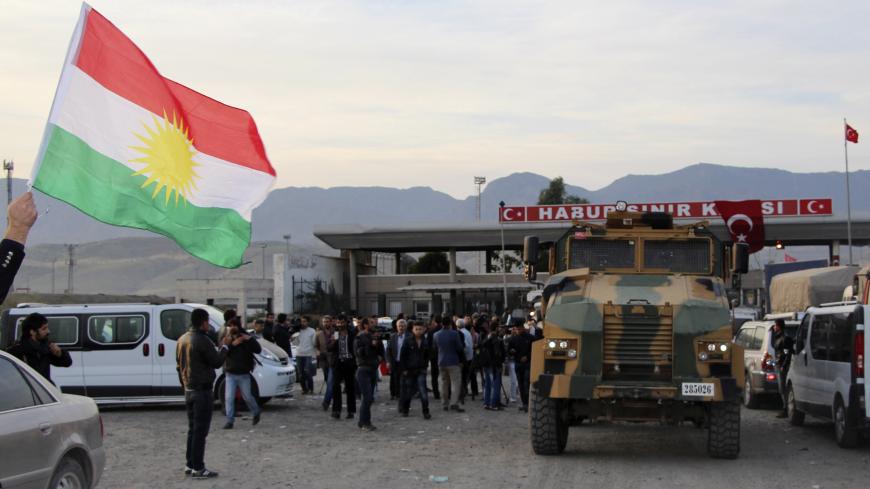 A man waves a Kurdistan flag as a Turkish military truck escorts a convoy of peshmerga vehicles at Habur border gate, which separates Turkey from Iraq, near the town of Silopi in southeastern Turkey, Oct. 29, 2014. - REUTERS/Kadir Baris

For about 10 years, the Kurdistan Democratic Party (KDP), which controls Erbil and Dahuk provinces in Iraq, has enjoyed close working relations with the Turkish government on trade, energy and security. The main architect of this opening has been the KDP's Nechirvan Barzani. The KDP, unlike other Iraqi Kurdish groups, has also acted as a counterweight since the 1990s to the formidable Kurdistan Workers Party (PKK) guerrilla movement — Turkish President Recep Tayyip Erdogan’s archenemy — by allowing Turkey to establish a number of military bases to monitor PKK activities.

However, Barzani, prime minister of the Kurdistan Regional Government (KRG) since 2012, was not nominated by the KDP to form the next KRG Cabinet. This is causing Erdogan to worry about the fate of a 50-year secretive energy deal made with Barzani in 2014.

In short, the KDP has been a critical partner for Erdogan. He was in Venezuela early last month when the news about Barzani broke and phoned from Caracas to find out more about what was happening in Erbil. According to two sources briefed about the conversation, Erdogan was concerned. “It took several minutes for Nechirvan to convince Erdogan that he should not worry about the changes,” one source told Al-Monitor. Another source said Erdogan directly asked Barzani, “Are you happy with the changes?” While Barzani told Erdogan that the decision to nominate his cousin Masrour Barzani as prime minister has been based on consensus, foreign diplomats and sources close to the KDP say the switch was not easy and fairly acrimonious.

The changes involving the powerful Barzani family are not only a family affair but also a regional issue that Turkey and Iran are watching closely.

In recent years, the Kurdish issue in Iraq and Syria has taken up a lot of the thinking space in Erdogan’s brain. Turkey is currently fighting Kurds across the four parts of Kurdistan, in Iran, Turkey, Iraq and Syria.

On several occasions, Turkish jets have bombed the fighters of the Kurdistan Free Life Party (PJAK) — a guerrilla group affiliated with the PKK that fights the Iranian government — right on the Iranian border with the acquiescence of Tehran in recent years, sources close to the PJAK say. Turkish security forces fight the PKK in Turkey's southeast and have constructed dozens of bases across the border inside Iraqi Kurdistan to restrict the movement of the PKK.

Turkey invaded the Kurdish enclave of Afrin in Syria last year, and as Turkish Foreign Minister Mevlut Cavusoglu said Jan. 10, Turkey will attack the Syrian Kurds regardless of the US withdrawal. Whether President Donald Trump delivers on his threat to devastate the Turkish economy if Turkey attacks the Syrian Kurds is not clear.

Turkey does not want to see another self-administered Kurdistan on its doorstep that spends millions of dollars annually on lobbying in Washington and other Western capitals. Since 1992, Turkey has faced numerous problems with the Iraqi Kurds from whose territory PKK fighters cross the border into Turkey and attack Turkish security forces and their Kurdish collaborators. In the first decade of Kurdish rule in northern Iraq, Turkey enticed Kurdish peshmerga to fight a bloody battle against the PKK fighters in the mountains of Iraqi Kurdistan; still, the Iraqi Kurds, feeling more anchored and connected internationally, have become more independent actors.

The issue of the Syrian Kurds is a big headache for Erdogan; another one involves the activities of the PKK in the Sulaimaniyah area, the seat of the Patriotic Union of Kurdistan (PUK). Since August 2017, when the PKK abducted two senior officials of the Turkish intelligence agency near Sulaimaniyah, Ankara has placed tremendous pressure on the PUK to limit PKK activities. Turkey also has continued a ban on flights through its airspace to the Sulaimaniyah airport that started after the Iraqi Kurdish independence referendum in September 2017.

Ankara says there is no coherent rule in PUK-controlled areas, unlike in KDP-controlled areas under Barzani. A Turkish diplomat told Al-Monitor that this has created a vacuum the PKK has exploited to increase its activities. A Turkish diplomat told Al-Monitor on condition of anonymity that the main stumbling block is “financing and sending new recruits to the mountains, which is done in safe houses in Sulaimaniyah.” Still, the PUK has intensified its crackdown on PKK activities, leading to the arrests of dozens of people affiliated with the groups close to the PKK in Sulaimaniyah. Turkey is allegedly prepared to lift the ban on use of its air space for flights to Sulaimaniyah later this month following the recent visit of Iraqi President Barham Salih, who is a senior member of the PUK.

Turkey apparently also has concerns about PKK activities in KDP-controlled areas as well as the activities of Gulen educational institutions. “The KRG has taken over all our institutions, and we are not operating anything there,” a Gulen movement official who operated in Kurdistan until two years ago told Al-Monitor via Facebook from a Western capital. “The terror that Erdogan unleashed against us made life unbearable for us in Kurdistan.”

Erdogan’s overzealous drive to strike hard at opponents in and around Turkey will undoubtedly win him votes inside the country, but Turkey is bound to be troubled by the Kurdish issue for years to come as demonstrated by the changing US position on the Kurds of Syria.

The PKK is a powerful transnational armed organization and further pressure from the PUK on its activities and activists in Sulaimaniyah area could propel the group into reacting, which could have devastating consequences for the stability of the Sulaimaniyah region.

As for the formation of the next KRG government, negotiations are dragging on. Erdogan's ally Nechirvan Barzani has been nominated to be KRG president, a post that is expected to be less important than prime minister. There is no clear indication as to how he and his cousin Masrour Barzani will share power.