Iran, Russia remain skeptical about US exit from Syria, Afghanistan

With the announcement of a US withdrawal from Syria, Iran and Russia can be expected to intensify their bilateral cooperation to achieve common interests rather than turn against each other. 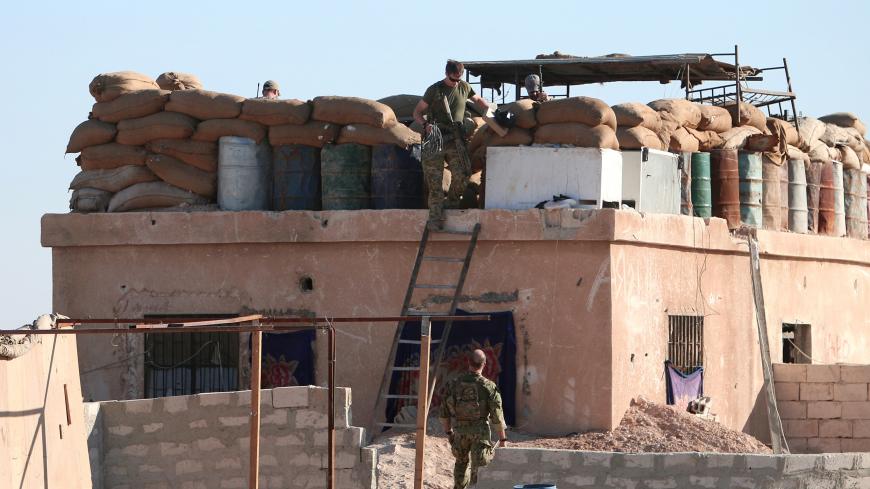 A US fighter walks down a ladder from a barricade, north of Raqqa city, Syria, Nov. 6, 2016. - REUTERS/Rodi Said

In the political sphere, Iran and Russia have interpreted the announced US withdrawal from Syria — be it tactical or strategic — as an American failure and an indication that their own policies have succeeded.

In Iran, the deputy commander of the Islamic Revolutionary Guards Corps, Brig. Gen. Hossein Salami, has described the US exit as an obvious retreat and a sign that US policies in the region have hit a dead end. In Russia, President Vladimir Putin has stressed that there is no need for a US presence in Syria, suggesting that US policy has been but a failure.

Yet, when geopolitics and regional security are considered, many Iranian and Russian officials are skeptical about the withdrawal and do not see it as a significant shift in Washington's Syria strategy. This probably explains why Iran's Supreme Leader Ali Khamenei and President Hassan Rouhani have refrained from commenting on the plan so far. The chief of staff for the armed forces of the Islamic Republic, Maj. Gen. Mohammad Bagheri, argues that given the massive US presence in the region, the Syria pullout is no policy reversal. In Russia also, Foreign Minister Sergey Lavrov has cast doubt on the implementation of President Donald Trump's order.

To the skeptics, even in case of an actual complete pullout, the United States will continue to directly or indirectly interfere in Syria. What fuels concern in both Tehran and Moscow are the ambiguities and likely negative implications of Trump's decision. There are a number of potential key impacts of a US withdrawal, four of which are listed below.

The necessity to introduce a new balance of power in Syria

As a major power, the US has played an important role in both creating and disrupting the existing orders in the Middle East. The Syria pullout is no exception. The effort by alternative powers to redefine the order is another major challenge in itself. Among those powers, Iran and Russia are the two that have the greatest ability to establish a new order. The common understanding by Tehran and Moscow of their interests and threats in Syria could prepare the ground for their cooperation in defining a new order and preventing other players from adversely affecting their interests in the country. In this vein, the US departure is likely to weaken the Geneva framework as well as other Western-Arab initiatives on the Syria crisis, opening up space for further Iran-Russia cooperation within the Astana process and the Sochi talks, particularly with the aim of drafting a new constitution for Syria. Plans to strengthen cooperation among Moscow, Tehran and Ankara over implementing the Astana process, as emphasized by Lavrov, plus a scheduled fresh trilateral Moscow meeting in January, are steps in that direction.

Competition among present players in Syria may tighten

A US departure could trigger fresh rivalry among the present players who will go the extra mile to fill the vacuum and grab bigger shares within the existing calculations. Although Iran and Russia are expected to enter that competition — as the two still maintain differences over their shares in Syria — the vacuum will not be a great challenge given their overall macroscopic approach toward the balance of interests. Here, the pursuit of goals by other players such as Turkey or Arab nations, including their wanting to be more involved in the reconstruction phase, might further encourage closer cooperation between Iran and Russia, who will go to lengths to prevent those states from harming Iranian and Russian interests. In line with this approach and to manage the competition on the ground, Iran and Russia have both warned about a Turkish military offensive in northern Syria, and have also warmly welcomed the fashioning of a compromise between Syrian Kurds and the Syrian government.

US might try to ignite asymmetric war against Iran, Russia

Iranian and Russian officials have time and again accused Washington of inciting terrorist groups to damage Tehran and Moscow's interests. Bagheri once explicitly accused the US government of coming to the rescue of the Islamic State (IS) whenever the terror group was under siege or on the verge of collapse. Likewise, Lavrov has stated that IS has served merely as a pretext to justify US involvement in Syria, which he has said is essentially meant to overthrow the Assad government rather than fight terrorism. The Russian foreign minister even has said that IS has been viewed by US officials "almost as an ally in the fight against the Syrian regime." These remarks support the assumption that in a post-America Syria, the United States might still tend to exploit IS or other terror groups as a tool to advance its own agenda. This could once again bring Tehran and Moscow closer in thwarting common threats.

There are a multitude of paramilitary groups in Syria that the United States has either fought or funded during the war in Syria. Those groups now find the announced US pullout an opportunity to consolidate or strengthen their grips on areas they hold. Given the experience in Iraq, where the vacuum created by the US withdrawal offered a breeding ground for IS, the pullout from Syria could raise a similar legitimate concern. Although Syria and Iraq deeply differ — including the fact that Iran and Russia have significantly jointly helped Damascus tackle terror threats — Tehran and Moscow have every right to be worried about the growth of regional extremism and a revival of defeated terror groups. This shared fear again creates further ground for Iran and Russia to stand by each other.

Iran and Russia view the question of the United States in Syria and the Middle East within a broader regional context. As such, Trump's speech at Ain al-Asad air base in Iraq — where he stressed the continued presence of American forces in Iraq and the possibility of using them for operations in Syria — and his reluctance to end the US presence in Afghanistan have sent the signal that there is no strategic policy shift on the horizon.

Meanwhile, as opposed to the case of Syria, there has been no sign of Trump’s pledged withdrawal of half of the US forces in Afghanistan. If implemented, that decision or any other plan for a greater US exit will bring the war-ravaged country the same security consequences — or even worse — that Syria might face after an American pullout. With that outcome looming large, Iran and Russia have intensified diplomacy and joint efforts to mitigate the negative impacts. Indeed, the September Tehran Security Conference attended by officials from Iran, Russia, China, India and Afghanistan as well as the November Afghanistan peace summit in Moscow were both held within that very framework.

With their shared regional approach toward the Syrian and Afghan questions, Iran and Russia have reached a common understanding on their interests and threats. The two consider US actions in Syria and Afghanistan as well as in Iraq directly and indirectly as running counter to their own interests. This has led Tehran and Moscow toward success in their joint coordination in Syria. They have also realized that lowering the level of mutual support in one country could affect cooperation in another. Therefore, given that Russia and Iran need each other's support for a common agenda in Iraq and Afghanistan, both Moscow and Tehran in the wake of the announced US pullout from Syria prefer interaction and a balance of interests over the rivalry that a US exit may spark between the two players.

Iran and Russia are conscious about their political and battlefield influence in Syria, Iraq and Afghanistan. They understand that mutual assistance is a win-win strategy that reduces the costs of their presence and guarantees more of their interests.