Why Iran has opened up about engagement with Taliban

Iran's engagement with the Taliban amid the ongoing US peace negotiations with the group is part of Tehran’s strategy of defensive engagement in its efforts to adapt to the changing geopolitics of Afghanistan. 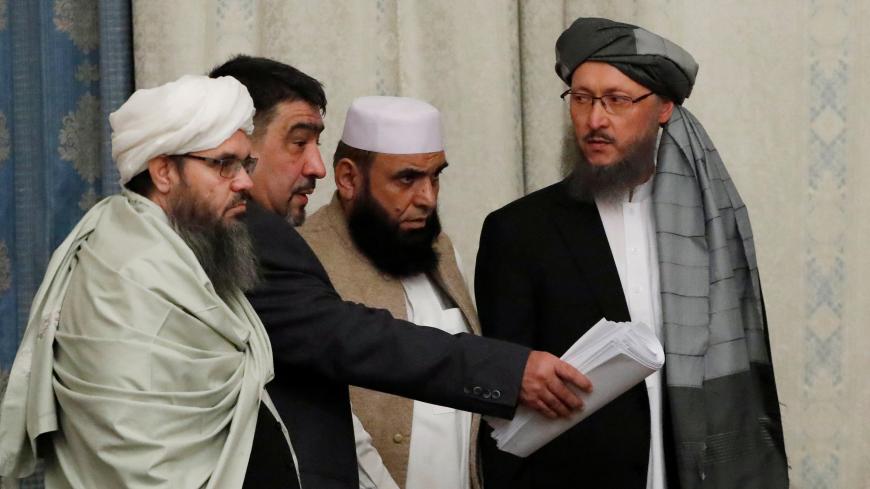 Members of the Taliban delegation take their seats during multilateral peace talks on Afghanistan in Moscow, Russia, Nov. 9, 2018. - REUTERS/Sergei Karpukhin

After years of accusations, Supreme National Security Council Secretary Ali Shamkhani confirmed that Iran had been holding talks with the Taliban during a Dec. 26 visit to neighboring Afghanistan. Shortly after this trip, Taliban representatives headed to Tehran to discuss the Afghani peace process with Iranian officials.

Redefining the Taliban is part of Tehran’s strategy of defensive engagement in its efforts to adapt to the changing geopolitics of Afghanistan. Ever since the Soviet invasion in 1979, Iran has been deeply engaged with the successive Afghani crises. This engagement has at times been offensive and at other times defensive.

For instance, the shocking events of Sept. 11, 2001, placed Iran in a position of offensive engagement. The Islamic Republic played an active role in the collapse of the Taliban’s Islamic Emirate as well as the Afghani state-building process following the 2001 US invasion, beginning with the 2001 Bonn conference and continuing into recent years. The Bonn conference forged limited Iranian engagement with the United States that in turn helped the Northern Alliance, thus positioning Iran as one of the latter’s allies in the Afghani state-building process. Another outcome was the expansion of Iran’s economic and trade relations with Afghanistan.

This limited engagement with the United States came to an abrupt end in 2002, after US President George W. Bush described Iran as part of an “axis of evil” in his State of the Union speech. Tehran became increasingly skeptical toward Washington and its agenda in Afghanistan.

The state-building process initiated in Bonn has met increasing challenges. Forces close to Iran have become worried about the future of Afghanistan, and years have passed since Iran’s limited engagement with the United States on the war-torn country came to an end. Against this backdrop, Iran has even accused the United States of transferring Islamic State forces from Iraq and Syria to Afghanistan.

More importantly, the Taliban has moved from the sidelines to the forefront as a deciding factor in the Afghani equation. Having eroded the power of the government in Kabul, the militant group now enjoys some regional legitimacy, has regular engagement with China and Russia and has even brought the United States to the negotiating table.

Thus, the current trend favors the Taliban, so much so that the Afghani government feels an urgency to negotiate with the group and each Afghani party is independently trying to enter talks with it. The Taliban, meanwhile, has rejected negotiations with the government in Kabul and even talked about reviving the Islamic Emirate.

Given Afghanistan’s new geopolitics, Tehran is seeking a peaceful coexistence with the Taliban. Unlike the Taliban that Iran nearly went to war with after Sept. 11, the new Taliban shares some common views with Iran. The key point that they have in common is a shared interest in US forces leaving Afghanistan. Iran has continuously expressed concern about the US bases in the country as well as its permanent presence there. Thus, if the US-Taliban talks lead to American forces leaving or reducing their numbers in Afghanistan, it will be a victory for both Iran and the Taliban.

Afghanistan’s political stability is another factor that has always been important for Iran. Tehran has tried at different times to establish pragmatic relations with key players involved in the Afghani crisis. At present, about half of Afghanistan is under the control or influence of the Taliban, making it once again Iran’s neighbor.

It should be noted that the formation of a peaceful and lasting coexistence between Iran and the new Taliban will be complicated and filled with uncertainties. A large portion of the forces that are close to Iran in Afghanistan may fall victim to the new state-building measures that are focused on the Taliban. The Taliban coming to power could also weaken Iran’s allies and push them to the sidelines. Tehran views the Taliban’s efforts to revive the Islamic Emirate of Afghanistan as an ideological-geopolitical threat as such a development would shift the region’s ideological map to Tehran’s disadvantage.

Saudi Arabia and the United Arab Emirates are trying hard to direct the new round of Afghani peace negotiations in their favor. Meanwhile, Tehran is monitoring their efforts with concern. Given the Taliban’s dependence on Pakistan and its animosity toward India, the group’s power over the Afghani government could threaten the strategic Chabahar port project in southeastern Iran as well as Iran’s $2.7 billion worth of exports to Afghanistan. If the Taliban revival means the formation of a four-way coalition between Kabul, Islamabad, Riyadh and Abu Dhabi, Tehran’s peaceful coexistence with the group will face serious challenges.

In this equation, Russia and China’s increasing role in the Afghani crisis and their ability to influence Pakistan’s strategic behavior somewhat alleviate Tehran’s concerns. However, just as the United States’ extensive engagement in Afghanistan previously complicated Iran’s role in the crisis, its disengagement could create even more complications in terms of its cooperation with other actors. A speedy US exit from Afghanistan could quickly lead to the collapse of the political order in the war-torn country and expand a crisis to Iran’s immediate east.

In recent decades, Afghanistan has witnessed numerous failed peace negotiations. The current complicated negotiations with the Taliban are still young, and Iran, rather than shaping the course of the negotiations, is trying to adapt itself to its impacts. Against this backdrop, only one thing is certain: the Islamic Republic’s peaceful coexistence with the Taliban is not guaranteed.