Intel: How a deadly protest is challenging Turkey’s presence in Iraq 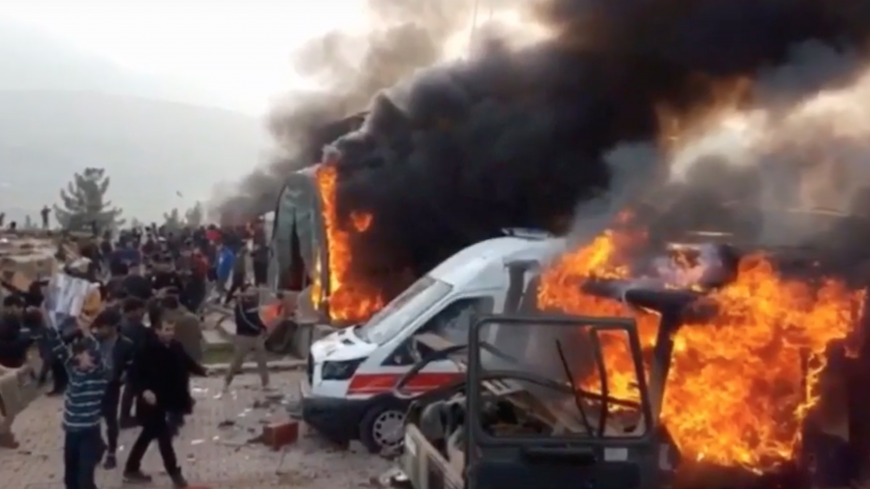 Protesters storm a Turkish military camp near Dahuk, Iraq, in this screenshot from a video uploaded Jan. 26, 2019. - YOUTUBE/BreakingNews

Turkey is doubling down on its stated intention to continue counterterrorism operations across the border following this weekend’s deadly protests at a Turkish military camp in northern Iraq. But the incident is increasing pressure on Ankara and other actors to act more cautiously.

Why it matters: The raid against the military base in Dahuk was the most violent popular protest yet against Turkish military action in northern Iraq. Protesters stormed the camp to protest civilian deaths in Turkish airstrikes against the Kurdistan Workers Party (PKK), which Turkey considers a terrorist group. Protesters burned two tanks and other vehicles. Turkish forces shot back, reportedly killing one protester.

So far some 20 civilians have reportedly been killed in Turkish operations against the PKK in Iraq. Baghdad has denounced the Turkish response and summoned Ankara’s ambassador to Baghdad in protest.

What's next: Baghdad has protested Turkey’s military presence and its campaign inside Iraqi territory several times in the past, to no avail. The Kurdistan Regional Government, for its part, has so far adopted a lower-profile stance to avoid irritating Ankara. But both are under pressure to rein in perceived Turkish aggressiveness.

Intra-Kurdish dispute: Aydin Selcen, a foreign policy analyst, points at the traditional cooperation between Ankara and the ruling Kurdistan Democratic Party, harking back to the '90s, to explain why Erbil’s response to the violence was “late, moot and meek.”

“One should not expect any abrupt changes in the forward posturing of Turkish armed forces beyond the national frontiers into Iraqi Kurdistan Region’s adjacent areas,” Selcen told Al-Monitor. “Having said this, it is as well obvious that the Turkish government’s relations with all the actors within the leadership are not what they used to be.”

Al-Monitor columnist Fehim Tastekin, an expert on Turkish-Iraqi relations, also thinks the incident is poised to increase the tension at all levels.

“As long as Turkey continues these operations, the tensions may increase both along Ankara-Baghdad and Ankara-KRG lines,” he told Al-Monitor.

Know more: Read Al-Monitor’s previous coverage on the tension between Ankara and Baghdad.