President Abdel Fattah al-Sisi’s recent decree regulating the travel of senior officials and requiring his permission stirred controversy as some claimed this move aims to strengthen the president’s grip on the country. 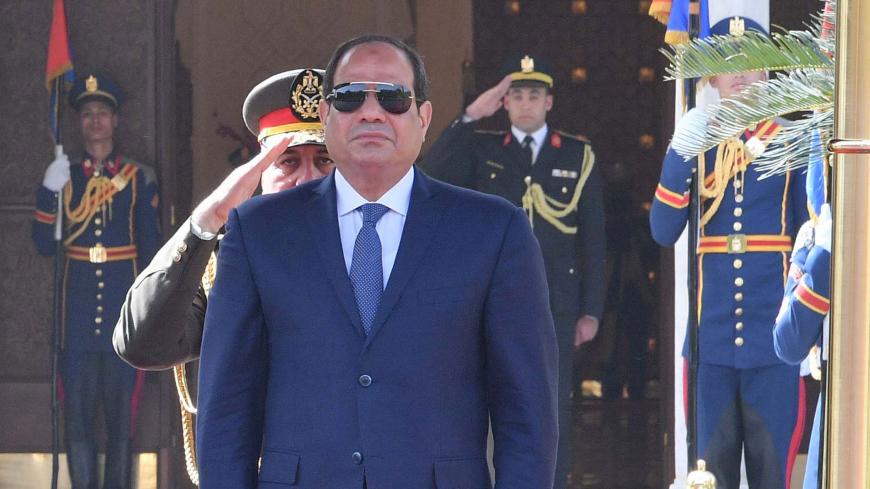 Egypt's President Abdel Fattah al-Sisi issued Jan. 15 presidential decree No. 23 of 2019, regulating the travel of senior officials who are traveling abroad on official missions. Under this decree, senior state officials will not be allowed to travel without getting Sisi's permission, a matter that has sparked a heated debate regarding the key reasons lurking behind this move.

The presidential decree's first article stipulates that the permission to travel abroad on official missions or job-related activities must be approved by the president of the republic. The decree applies to the prime minister, deputy prime ministers and ministers of defense, interior, justice and foreign affairs. It also applies to the heads of independent authorities as well as control and security agencies and their deputies.

The other ministers must get their permission from the prime minister.

Officials who are not mentioned in the first article, such as governors, deputy governors as well as heads of national councils, public agencies and holding companies, must get the prime minister's permission before traveling abroad as per the new decree. The decree has been published in the official gazette drawing mixed reactions.

Under the new decree, the officials must submit full details of their travels including the real purpose and the duration. Then, they have to wait for the president's or prime minister’s approval. Before this decree, only the officials at the executive authority would get their approval from the president or prime minister. But now, new legislative, supervisory and independent entities have become subject to the decree.

Speaking to Al-Monitor, member of parliament Suzy Nashed said the claims that this move aims to undermine the freedom of certain officials is an “exaggeration.”

“The decision is no more than a regulation of the travel of senior officials for financial and administrative considerations. It only aims to put the brakes on the travel expenses that add financial burden on the state budget. Egyptians themselves have called several times for not wasting public funds on the officials' foreign travels,” Nashed, who is a member of the parliamentary Committee of Legislative and Constitutional Affairs, argued.

Regarding the constitutionality of this decree, Nashed stressed the decision is constitutional as it comes within the powers of the president of the executive authority in accordance with the provisions of the 2014 constitution. “It is the right of the president to know everything about the officials' foreign travels to ensure the seriousness of such missions,” she added.

Meanwhile, a torrent of posts have flooded social media, comparing Sisi's decision with presidential decree No. 140 of 1972 issued by former President Anwar Sadat with the key aim of regulating the travel of state senior officials.

In 1972, President Sadat issued a presidential decree prohibiting the travel of ministers or their deputies except in cases of extreme necessity and with his consent. Under Sadat's decree, the ministers' deputies and heads of public bodies must get their permission from the prime minister. The 1972 decree will now be replaced by Sisi’s decree.

Nevertheless, a professor of constitutional law at one of Egypt's public universities, who declined to mention his name and the university he works at, stressed the sharp difference between Sisi's and Sadat's decree. The difference lurks in those who are subject to the decree.

“In Sadat's decree, it applies only to the executive authority's officials. But, in a groundbreaking move, Sisi issued a decree that applies to the heads of independent bodies,” he told Al-Monitor.

For instance, Al-Azhar is the highest seat of Sunni Muslim learning and is considered a completely independent association. However, the Grand Imam shall be subject to the decree since he holds a position of the same ranking as the prime minister.

The professor added, “Also, the parliament's speaker got his power from the people not from the president. The parliament is a legislative and supervisory entity. However, its speaker cannot travel without the permission of the head of the executive authority, the president.”

Trying to defend Sisi's decree, TV anchor Mohamed El-Baz said Jan. 15 in his talk show “90 Minutes” that this decree is not the first of its kind in Egypt's history. He went on to say that toppled President Hosni Mubarak dismissed former Health Minister Ismail Sallam after discovering that he had traveled without getting his permission.

Amna Nosseir, member of parliament and professor of Islamic philosophy at Al-Azhar University, told Al-Monitor that this decision should not be tackled with such sensitivity. “It does not underestimate or undermine officials. What will harm me if I inform my manager of my travel program to get his consent?” she wondered.