How calling out corruption cost this top Egyptian official his job 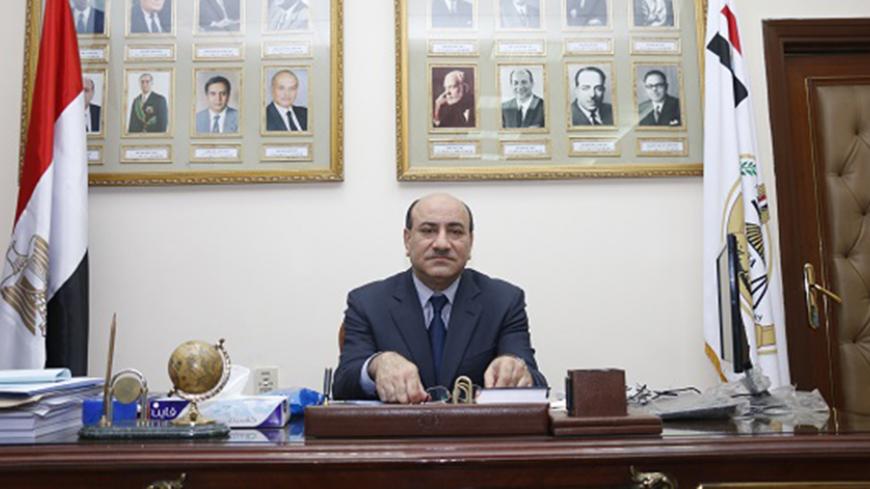 CAIRO — President Abdel Fattah al-Sisi’s March 28 decree relieving Hisham Geneina, the head of the Accountability State Authority (ASA), the country’s central auditing agency, of his post and appointing Geneina’s deputy Hesham Badawi to run the authority did not come as a surprise.

Many were expecting this decision months before its issuance, given the fierce campaign waged against Geneina due to statements he made to Egyptian daily Al-Youm Al-Sabea in December 2015, which claimed that the cost of corruption had reached 600 billion Egyptian pounds (around $76 billion) in 2015. These statements stirred a nationwide controversy in Egypt.

Consequently, Sisi formed a commission tasked with investigating these claims, headed by the chief of the Administrative Control Authority and assisted by Badawi, deputy head of the ASA, in addition to three representatives of the Ministries of Interior, Planning and Finance.

Days after his statement to Al-Youm Al-Sabea, Geneina issued a statement refuting his previous claims and clarifying that the corruption costs he had mentioned consist of the accumulated amount over a four-year period, not just 2015.

Yet the investigation commission continued its mission and issued a statement broadcasted on the state television channel on Jan. 12 accusing Geneina of making misleading statements involving deliberate exaggeration, omission and misuse of the term corruption.

The commission decided to send its report to the house of representatives and the public prosecutor and to entrust the National Anti-Corruption Committee, headed by the prime minister, with it. The Egyptian Parliament formed a committee to examine the commission’s report.

On March 28, the State Security Prosecution issued a statement dismissing Geneina’s statements as unruly, and within a few hours, Sisi issued a presidential decree to sack Geneina, pursuant to Law No. 89 of 2015.

This law authorizes the president to dismiss heads of supervisory authorities if the official proves to constitute a threat to the state’s security, lacks trust or consideration, fails to meet the duties of his position in a way that harms the state’s interests, or loses one of the qualifications that entitled him to the position.

The same law had sparked controversy at the time of its issuance as some rejected it for being specifically aimed at allowing the dismissal of Geneina, who was appointed by former President Mohammed Morsi. Geneina faced accusations of being associated with the Muslim Brotherhood, but he has denied these accusations in many press statements.

The Nation’s Future Party, the second largest party in the parliament, praised the decision to dismiss Geneina. Member of parliament Ashraf Rashad, the party’s secretary-general, indicated in press statements the day following the dismissal that the decision came as the result of Geneina’s recent attempts to distort the country’s image by issuing false statements about the extent of corruption. Rashad called for holding Geneina accountable for causing “huge losses” to the Egyptian people.

The Egyptian Social Democratic Party rejected the decision to dismiss Geneina and issued a statement March 30 indicating, “The decision was completely prepared in advance and came after a mobilization campaign launched by the state media against Geneina. This confirms that the state stands against those rejecting corruption.”

Ahmed Imam, member of the supreme body of the Strong Egypt Party, told Al-Monitor, “The decision to sack Geneina violates the principle of separation of the legislative, executive and judicial powers, which undermines the supervisory authorities’ capacity to monitor and detect corruption.”

He added, “The ASA will not be publishing in the coming period any reports on corruption under the pretext of the need for confidentiality of reports, despite the fact that citizens should be entitled to peruse these reports. Badawi, assigned to run the ASA affairs, was a previous official in the State Security Prosecution — an institution that believes in the secrecy of work and reports.”

“This decision to dismiss Geneina adversely affects investments. This is a message to businessmen that the regime does not abide by the constitution, which provides for the separation of the three powers,” said Imam.

At the same time, member of parliament Mohammad Abu Hamed told Al-Monitor that in his view the decision to dismiss Geneina was constitutional, “since the Constitution authorizes the president to dismiss heads of supervisory authorities in accordance with the law, and the law provides for the dismissal in case of threat to the state’s security. Geneina’s statements that corruption has cost the state 600 billion Egyptian pounds in one year have in fact damaged Egypt’s reputation and investments.”

He asserted that the dismissal of Geneina will not affect the work of the supervisory authorities, since the constitution states that the head of the ASA is appointed with the approval of two-thirds of the parliament members, but that the president is authorized to dismiss him in accordance with the law.

Abu Hamed accused Geneina of harboring intentions to harm Egypt by publishing the ASA reports, despite their confidentiality, since divulging these reports would affect the course of the investigations or harm the reputation of an institution or person based on uninvestigated reports.

He explained that the ASA reports are sent to the president, the parliament and the public prosecutor and must not be made public in press conferences like Geneina did.