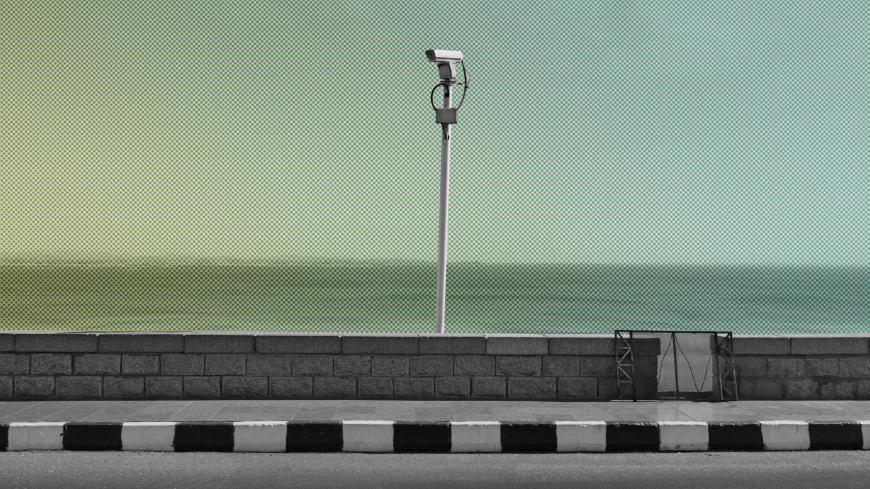 CAIRO — During its general session on Jan. 13, Egyptian parliament passed a bill on public shops that the government had submitted in December 2017. The bill includes controversial Article 27, which forces restaurant and shop owners to install indoor and outdoor surveillance cameras. The government argues that this article aims to prevent terrorist operations and track down the culprits.

After parliamentary approval, Article 27 reads as follows: “Public shops shall commit to installing indoor and outdoor surveillance cameras, as per conditions approved by the committee [a governmental committee that grants licenses for shops in each neighborhood or region], which determines the necessary requirements and activities for installing cameras and the places and activities where surveillance cameras should not be allowed.”

The article angered some members of parliament. Parliament member Mohammad Salah Abdel Badi argued that strict conditions must regulate the installation of surveillance cameras to ensure the personal freedom and privacy of citizens.

He told Al-Monitor, “Surveillance cameras must be installed in spots where people can see them to avoid restaurant and shop owners’ misuse of these cameras.”

Abdel Badi added, “Parliament discussed a bill to force shop and restaurant owners to install surveillance cameras. The bill did not pass muster until the government proposed introducing an article under the law on public shops to impose installation of surveillance cameras.”

Parliament member Anisa Hassoun had submitted a new bill forcing restaurants to install cameras in 2017. But in December 2017, the government proposed instead amending the already existing law on public shops. Parliament approved Jan. 13 a series of amendments to Law No. 371 of 1956, including articles on installing cameras and serving hookah and alcohol.

Abdel Badi explained that licenses issued by the municipality will not be granted or renewed for any restaurant or shop before verifying that surveillance cameras have been installed as per the law.

Article 29 states the cases in which shops will be closed or their permits revoked. A shop shall be shut administratively if it violates certain articles, mainly Article 27 of this law regarding the installation of electronic surveillance cameras.

Cairo deputy Gov. Ibrahim Saber told Al-Monitor, “Shops won’t be allowed to get permits or renew their permits unless they install surveillance cameras based on the competent security institutions’ approval.”

He added, “Surveillance cameras have become mandatory under the new legislation. They are a main requirement for granting or renewing permits.”

A shop owner in downtown Cairo, Ibrahim Ali, told Al-Monitor, “The government does not force shop or restaurant owners to install cameras immediately, but rather when the shop permit expires. At that stage, if the owner does not abide, the permit is not renewed and their work becomes illegal. They might then face police pursuits, confiscation and shop shutdown.”

For his part, April 6 Movement member Sherif al-Rouby has been receiving warnings from shop owners to steer clear of these shops and not frequent them.

Rouby told Al-Monitor, “Security personnel can use these cameras to track political activists and young partisans. The cameras are under constant police and security supervision.”

He accused authorities of using these cameras to track down activists and opposition members because shops and restaurants in Cairo have welcomed the January 25 Revolution activists. Rouby believes the cameras will allow authorities to discover the identity of political opponents frequenting the shops and facilitate their arrests.

He added, “Restaurant workers warned me repeatedly that national security authorities were searching for me in famous cafes in downtown Cairo.” He said these workers know him and do not doubt him, which is why they warn him.

Rouby said, “I have no problem with monitoring sovereign and governmental institutions with indoor and outdoor cameras. But restaurants and public places are another story unless there are prior doubts about citizens’ conduct.”

He believes that imposing surveillance cameras mainly stems from wanting to track down state opposition members and political activists rather than spotting thefts or criminal activity as the government claims.

Rouby said the main reason behind the bill is to spy on citizens everywhere, and that it is the result of security, political and social failure of the ruling regime. He noted, “If the political regime components were stable and balanced, there wouldn’t have been a need for increased security or surveillance of people in the streets.”

Director of the civil liberties program at the Egyptian Initiative for Personal Rights Amr Abdul Rahman told Al-Monitor that installing cameras in public places does not infringe upon personal privacy. Human rights lawyers can benefit from the law by asking for the content of cameras in some trials — such as in the case of the killing of activist Shaimaa al-Sabbagh.

He added, “The most famous case in which cameras could have been used to condemn people is that of former President Hosni Mubarak and his men, who were accused of killing protesters. The cameras of Tahrir Square and the Egyptian Museum were allegedly broken and did not record any of the revolution events.”

Abdul Rahman noted that security institutions always assume bad intentions and misuse cameras. But cameras do not capture sound, and security bodies cannot know what cafe frequenters are talking about. All they are doing is tracking people’s movement, he explained.