Rep. Barbara Lee, D-Calif., is looking for allies on her latest push to end the 2001 war authorization that the Donald Trump administration uses to fight terrorism in the Middle East. 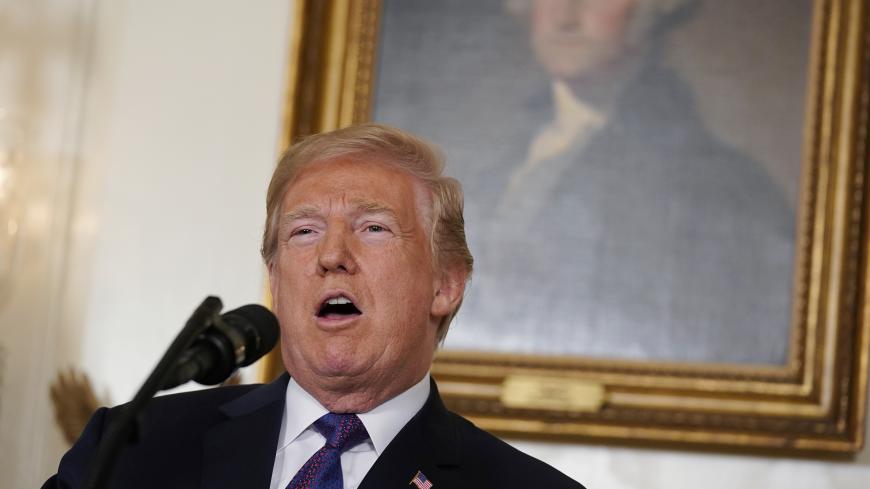 US President Donald Trump announces missile strikes on Syria while delivering a statement in front of a portrait of President George Washington at the White House in Washington, April 13, 2018. - REUTERS/Yuri Gripas

Congress is set to mount a fresh challenge to President Donald Trump’s war authorities just weeks after he announced that US troops would leave Syria.

Progressive Democratic Rep. Barbara Lee of California is looking for co-sponsors on legislation to sunset the 2001 Authorization for Use of Military Force within eight months. If enacted, the bill would force the Pentagon to seek new legal clearance to fight in Iraq and Syria, for instance.

The Bay Area Democrat was the lone vote in either chamber against the war authorization passed in response to the Sept. 11, 2001, terrorist attacks that paved the way for the US ground fight in Afghanistan. To this day she maintains that the authorization has given the White House an overly broad remit to wage war in the Middle East.

“For 17 years, presidents have relied on the overly broad 2001 war authorization to wage open-ended wars around the world,” Lee told Al-Monitor in a statement. “Congress has been missing in action on this issue for far too long, and I will keep working with my colleagues — on both sides of the aisle — to restore congressional oversight on matters of war and peace.”

Lee, whose last challenge to the war authorization was struck down by the Republican-led House Rules Committee in 2017 despite bipartisan support, did not address Al-Monitor questions over whether the bill had a better chance of success now that Democrats control the lower chamber. Unlike a 2018 Senate bill proposed by then-Foreign Relations Committee Chairman Bob Corker, R-Tenn., and Sen. Tim Kaine, D-Va., Lee’s bill does not offer a legal alternative to keeping a US presence in those countries.

Current and former Democratic aides expressed doubt over whether leadership would take up the new bill, which may not animate the progressive base in the same way as the successful House challenge to US military involvement in Yemen last year. “There’s not a humanitarian crisis that people can get behind,” a Democratic House aide told Al-Monitor. “If you just repeal it and then, we can’t fight terrorists? I think that would be the reaction.”

But whether the legislation advances or not, it highlights a renewed challenge to the Pentagon’s Middle East posture from progressive Democrats who helped flip the House with a 40-seat margin in November. Even the Pentagon’s so-called “by, with, and through” strategy, which calls for a light footprint of American advisers and special forces to train the Iraqi military and the Kurdish-led Syrian Democratic Forces, may not be safe from scrutiny.

“The public is not interested in large numbers of US troops fighting all over the world,” said Dana Stroul, a former Senate and Pentagon staffer now with the Washington Institute for Near East Policy. “The Syria situation has laid bare that very rarely does the US find perfect partners. There are going to be trade-offs. This notion of by, with, and through can be costly and is not necessarily fast. Americans have not historically been strategically patient.”

After Democrats flipped the House in the November elections, party leaders, including House Armed Services Committee Chairman Adam Smith, D-Wash., promised stricter oversight of Pentagon counterterror missions underpinned by the war authorization, and deadly battles in Yemen and Niger that led to the deaths of US troops.

Congress has long feared the authority could be stretched to the breaking point by the administration’s pledge to challenge Iran. National security adviser John Bolton in particular has pledged that a coterie of US troops at a training base in Syria could lean on Tehran’s flow of supplies into the war-torn country.

The mismatch of authorities with resources and ambitious missions in the Middle East could force the United States to depend on more capable partners to build a secondary marketplace for building up militaries in weak states, as US ally Colombia has done by training troops in Latin America and other parts of the world.

“I do see this trend of ‘by, with and through’ not just being applied in places where the government is very weak,” said Jonathan Schroden, who directs the Special Operations Program at the CNA defense think tank. “The US wouldn’t be conducting direct military operations but it could certainly enable a partner nation force. If you look at Jordan or the UAE, they certainly have very capable forces.”

Schroden says US defense circles have also long bandied about the idea of creating "centers for excellence" in the Middle East to support foreign-led military training. The United Arab Emirates in particular has put an emphasis on training foreign forces to fight in Yemen, spending $122 million to train its elite Presidential Guard last year, but rights groups have accused UAE-backed Yemeni units of disappearing and torturing dozens of people.

But even shifting resources may not prevent a broader debate in the future on the president’s war authorities, especially as the public and Trump himself appear ready to see US troops return home after more than 17 years of combat since the Sept. 11, 2001, attacks.

“If you were born in 2001, you’re going to college now,” Stroul said. “That’s a very long time to be using the same authority and not to have some traction to update it.”