Ankara is looking to negotiate with Moscow over its proposed intervention in northern Syria. 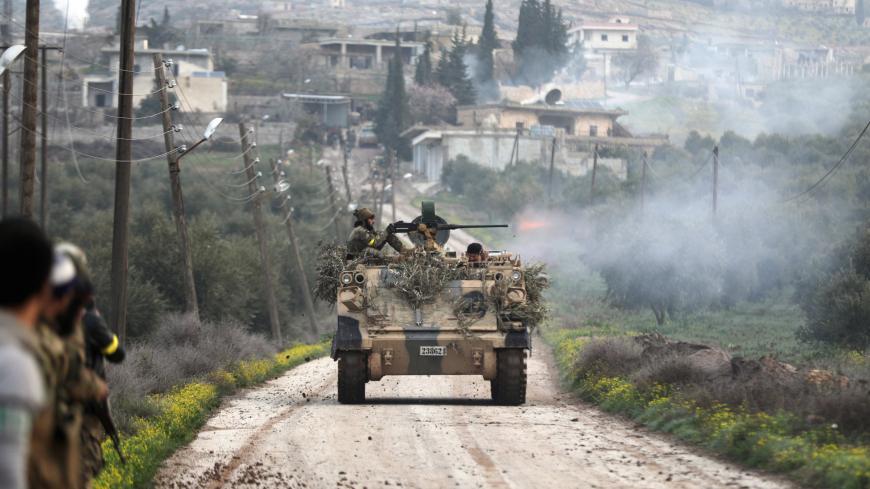 ANKARA, Turkey — Turkey is going to negotiate with Russia over whether it can march into northern Syria to crush the Kurdish militia as soon as the United States has completed its withdrawal. Russia holds that when the Americans leave, northern Syria should return to the control of the government in Damascus.

Presidents Recep Tayyip Erdogan and Vladimir Putin are expected to meet at a later date, presumably to finalize the issue, NTV reported.

Erdogan has said repeatedly that Turkish forces and their Syrian Arab allies will cross into Syria to clear the militia known as the People's Protection Units (YPG) from the north-central town of Manbij and the northeast region of Hasakah-Qamishli.

The Americans have a working relationship with the YPG as it is the principal component in the Syrian Democratic Forces (SDF), the main US ally in the battle against the Islamic State (IS) in Syria. The SDF drove the IS out of Manbij in 2016 and has run the town, which had a prewar population of 100,000, with US support since.

Turkey has long protested the US alliance with the SDF, as the YPG is the sister organization of the Turkish insurgent group, the Kurdistan Workers Party, or PKK.

This week the media has shown a flurry of pictures and videos of Turkish tanks, artillery guns and armored personnel carriers heading to the Syrian border by road and rail.

Reports say a Turkish ally — the Free Syrian Army — and the Syrian government of President Bashar al-Assad are building up their forces on the outskirts of Manbij, ready to dash in as soon as the Americans leave.

“An essential question arises,” Russian Foreign Ministry spokeswoman Maria Zakharova told reporters in Moscow. “Who will inherit control of the territories vacated by the Americans? Obviously, that should be the Syrian government, in accordance with international law and considering the path that Syria and the Syrian people have traveled down.”

A reporter for NTV, Oguz Haksever, gave the Turkish reply when he told viewers, “The Russians want the regime to fill the gap, but Ankara thinks that is risky because of the threat of the YPG-PKK.”

Russia does not regard the YPG as a terrorist group. Its troops in Syria have gotten along with the YPG, whose political wing, the Democratic Union Party (PYD), has offices in Moscow.

There are other reasons why Ankara needs to talk with Moscow. When the Americans leave, the airspace of northern Syria will be dominated by the Russian air force, stationed in northwest Syria.

Also, when President Donald Trump discussed the prospects of a US withdrawal from Syria with Erdogan in a phone call Dec. 14, Erdogan assured him that Turkish forces could wipe out the remainder of IS.

The last pocket of IS territory is in the east-central region of Deir ez-Zor. To reach it, Turkish forces would have to go as far as 200 kilometers (125 miles) into Syria and pass through areas under Syrian government control.

It is extremely doubtful that Assad’s government, riding a wave of victory in the civil war, would allow a column of Turkish tanks or Free Syria Army rebels to penetrate that deep into Syria.

All in all, it seems more than likely that when they meet in Moscow this weekend, the Turkish Cabinet ministers will not change Russia’s opinion about who should “fill the gap” when the Americans leave, expected in March or April. The Russians will want the Syrian government to take over Manbij and the Hasakah-Qamishli region. And while this would disappoint Erdogan, he is politically capable of getting his voters to accept such a compromise.

The Turkish columnist Cengiz Candar wrote in Al-Monitor this week: “The deployment of the Syrian army in the Kurdish regions, where there has been self-rule since 2012, is not Turkey’s priority, but it is a conclusion that Ankara can live with, as long as Kurdish governance ends on its frontier.”

What Erdogan cannot live with is criticism from the Turkish intelligentsia.

On Thursday, the 11 doctors on the central council of the Turkish Medical Association stood trial in Ankara for “making terrorist propaganda” and “inciting enmity and hatred.”

When Turkish troops and the Free Syrian Army marched into Afrin in January, the government managed to generate a wave of nationalist support. The ostensible target of the operation was the YPG, but government critics said that what Ankara really sought was to end Kurdish control in northwest Syria.

The Turkish Medical Association posted a statement on its website titled “War is a public health problem.”

“Each armed conflict, each war, brings human tragedy by causing irremediable problems in terms of physical, mental, social and environmental health. As members of a profession who have taken an oath to save lives, we constantly keep in mind our first and foremost duty is to defend life and to maintain an environment of peace.”

“My citizens have been martyred,” the president continued. “Have we heard the slightest word (from the TMA) about these terrorist incidents? They are in the same boat.”

Prosecutors took their cue and today the doctors went on trial. Foremost among them is the TMA chairman, professor Sinan Adiyaman, a surgeon at Ankara University.

A similar process occurred this past weekend. Two elderly but well-loved actors, Metin Akpinar and Mujdat Gezen, appeared in a talk show on Halk TV, a pro-opposition channel whose audience is ranked fourth in prime-time viewing.

Akpinar, who is 77, said the answer to the strife and polarization in Turkey today was democracy. “If we can’t reach that point, then perhaps the leader will be hanged from his feet like it happened in all other fascisms of the past … ”

Very pointedly, he added that previous Turkish leaders who “turned toward Russia” had been overthrown by the military, giving prime ministers Adnan Menderes and Suleyman Demirel as examples.

Gezen, 75, attacked the president for “rebuking” everybody. “He calls on people ‘to know their limits.’ Look, Recep Tayyip Erdogan, you cannot test our patriotism. You should know your limit,” Gezen said.

The program was broadcast Friday. Erdogan reacted Sunday, and hours later Istanbul prosecutors — who don’t usually work on Sundays — declared they were investigating the actors for insulting and threatening the president.

Erdogan said in a speech, “They say they will take me to the gallows. These are so-called artists. You think you can hang the president of this country? Now go and pay your price at the judiciary.”

Turkey is already known for having more journalists in jail than any other country in the world. The government argues that because the journalists face charges such as “making terrorist propaganda,” they are actually criminals rather than journalists.

Journalists, doctors, actors … the prosecutors’ net widens. And it seems strangely at odds with Erdogan’s having been re-elected with 52.6% of the vote in June, and his Justice and Development Party’s (AKP) having a commanding position in parliament.

“Erdogan knows that [Akpinar and Gezen] have no influence on AKP voters,” Meral Cildir, an executive of the Human Rights Association, told Al-Monitor, “but he believes it is useful to threaten everybody in the country.”

“By doing this to 70-year-old actors and comedians, the government is creating an atmosphere of general fear. People will say 'If it can happen to them, it can happen to me as well,'” Cildir said.